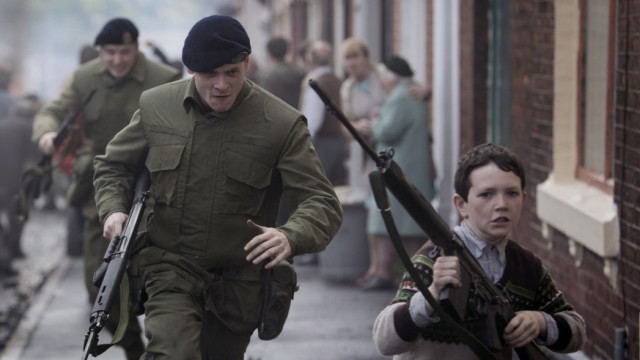 The streets of Belfast in 1971 erupted into violence with Protestants and Catholics at each other’s throats. The British army is called in to search homes for firearms. Their presence quickly garners the attention of an agitated populace. Fights break out, bricks are thrown and guns are fired. Before he can even comprehend what has happened, soldier Gary Hook (Jack O’Connell) finds himself outnumbered and abandoned by his unit. He darts through streets and pushes through houses as young punks with guns dash after him. We follow his every desperate move and breath that could be his last as he struggles to survive behind enemy lines with no weapons and nobody to trust.

As far as action movies go, ‘71 keeps the blood flowing quite vigorously. The camera is kept close and tight as Gary fleas for his life. Down the street, behind some cars, down an alley, through a house, around a corner and back up an alley the camera leads – never taking an eye off Gary’s fast feet or the gunmen behind him. Every scene builds on the intensity and corruption for a town drowned in tribalism and guns. With such ferocity for a true series of events, the script for ‘71 is kept tight and thoughtful for all its action. Though we’re mostly following Gary – a man we want to root for getting back home to his son – we get to see several perspectives in this dark setting. A young boy helps his sister with her homework before he drops everything to go out with his friends and kill Gary. A concerned couple debate about whether or not to help Gary with his injuries at the risk of being murdered for harboring the enemy. And a concerned group of British spies become agitated with the developing situation that finds them desperately trying to cover their true motives.

While the entire cast is remarkably extraordinary, it’s Jack O’Connell who steals the show. He already proved his strength and tenacity as the lead in Unbroken (another true story of a beaten man), but now he has safely secured his place as the next big action star. He bursts through fences, straggles away from a bomb explosion and tries to remain alive long enough for help when being strangled to death. O’Connell may not have as many chances to bash skulls, but he can take a hefty amount of punches. He’s a soldier doing his best to act on orders not to assault the public despite seemingly everyone wanting to blow his brains out. It still doesn’t mean he won’t defend himself against gun-toting bad guys – if he can muster the strength after being savaged.

Even with its collection of pauses that try to weave some expected twists and emotions into the mix, ‘71 managed to keep me on the edge of my seat. Not a frame feels wasted or unnecessary. When O’Connell isn’t fleeing for his life or taking a pounding, he’s grasping for life on the floor in his blood and sweat. And at the heart of it all is a story about people losing their honesty and morality in a dire situation. All of this makes for one of the most uncompromising and compelling action films of the year.

‘71 is one of the grittiest action pictures of 2015 that refuses to let your eyes leave the screen. The action-star presence of Jack O’Connell is powerful and the direction by Tat Radcliffe is precise with tension yet respectful to the material. There’s no reason not to buy what is sure to be the sleeper action hit of the year.