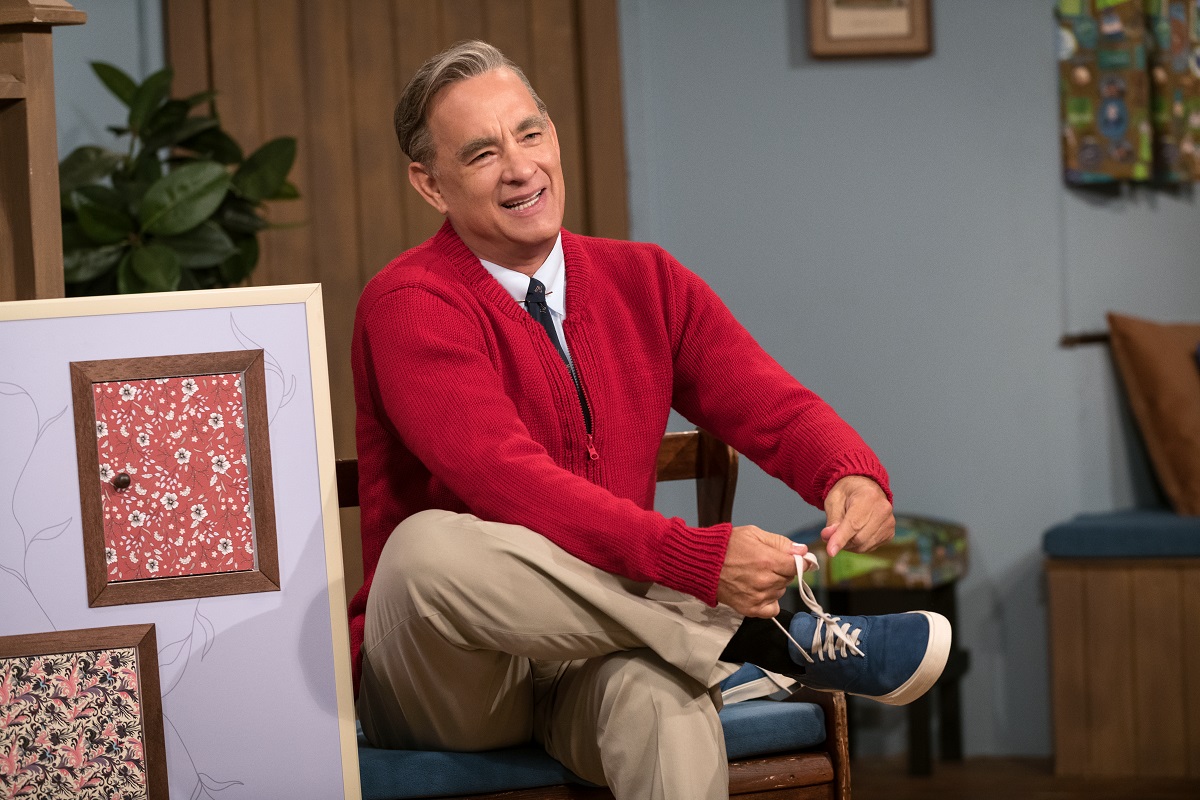 While there are plenty of nostalgic stings for Mister Rogers’ Neighborhood present within this emotional journey, there’s one moment that is exceptionally powerful. While out to lunch, Rogers recommends a break from the conversation to have a moment of silence to think of those who loved us and brought us into this world. He is silent. The restaurant is silent. The audience is silent. The camera closes in on Rogers as he stares at us, hoping we are thinking warm and cherished thoughts. I remember first seeing Rogers perform this act of empathy at an awards ceremony and I nearly bawled from the quiet consideration. The tears were fought hard once more as Tom Hanks continues that gentleness so wholesome it hurts.

Though the film mostly delves into the story of journalist Lloyd Vogel, it’s a story that’s treated similar to Mister Rogers’ Neighborhood. The film begins and Tom Hanks strolls onto the screen as Fred Rogers in the manner many of us grew up first seeing him. He enters his TV home as the music plays, singing that old tune about wanting us to be his neighbor, a smile inviting us in. He starts his show and reveals a not-so-pretty picture of Lloyd, talking about the gash he received on his nose from a fight. It may seem like this is the set up for a darker story but Rogers was never one to back away from topics of death and war. And he really wants to tell us a story of someone who was in need of his help.

Lloyd (Matthew Rhys) lives a life of great contention. He’s a struggling journalist on bad terms with his father (Chris Cooper) and distant with his wife (Susan Kelechi Watson) and newborn child. He views the world through a cynical lens and isn’t exactly thrilled his editor at Esquire has assigned him a short fluff piece on Fred Rogers. To Lloyd, he’s just a children’s entertainer and nothing more; something you outgrow.

But Lloyd is amazed to discover that Fred is not only welcoming of Lloyd for an interview but very interested in Lloyd himself. So willing is Fred to get to know Lloyd that the interviews seem to view right back around as Rogers seems to be more interested in our lives than his own. Fred wants to know everything; how we’re feeling if we’re okay, how did we grow up, how did we get that scar. Lloyd, unlike others, is fearful to open up, making Fred all the more concerned.

Throughout the film, I found myself on the verge of tears not merely from Hanks’ strongly caring performance but also Rhys’ deep portrayal of a troubled soul somberly seeking a way to being a better person. We get less of Rogers than we do Lloyd and it’s for the best. We see Rogers the way he’d most likely want to be seen; as the caring person who wanted to devote all the kindness to others. He doesn’t think of himself as a hero or a saint. As Rogers’ wife later explains, portraying him as such a perfect person would mean his level of kindness is nearly unattainable. It’s not hard to be kind to someone on an individual level. It’s never too late to be that person. We see this happen through Lloyd who turns his life around though it seems like he’s too old for Rogers’ lessons. You’re never too old to be a better person.

A Beautiful Day in the Neighborhood wraps things up with a bittersweet bow for how much change Lloyd makes over a few months of talking with Rogers but it’s a sweet ending that is deserved. Though the film does get a bit lost here and there in trying to weave in the surreal of the TV program for Lloyd’s chaotic state (including a trippy Land of Make-Believe sequence), the philosophy and emotion are overflowing in such a picture that is deeply therapeutic. It’s a refreshing sensation to see a film such as this that asks us to take a break and think of someone else as well as ourselves. It’s the kind of film that leaves you with such a good feeling, to know you’re alive with a happy feeling inside.