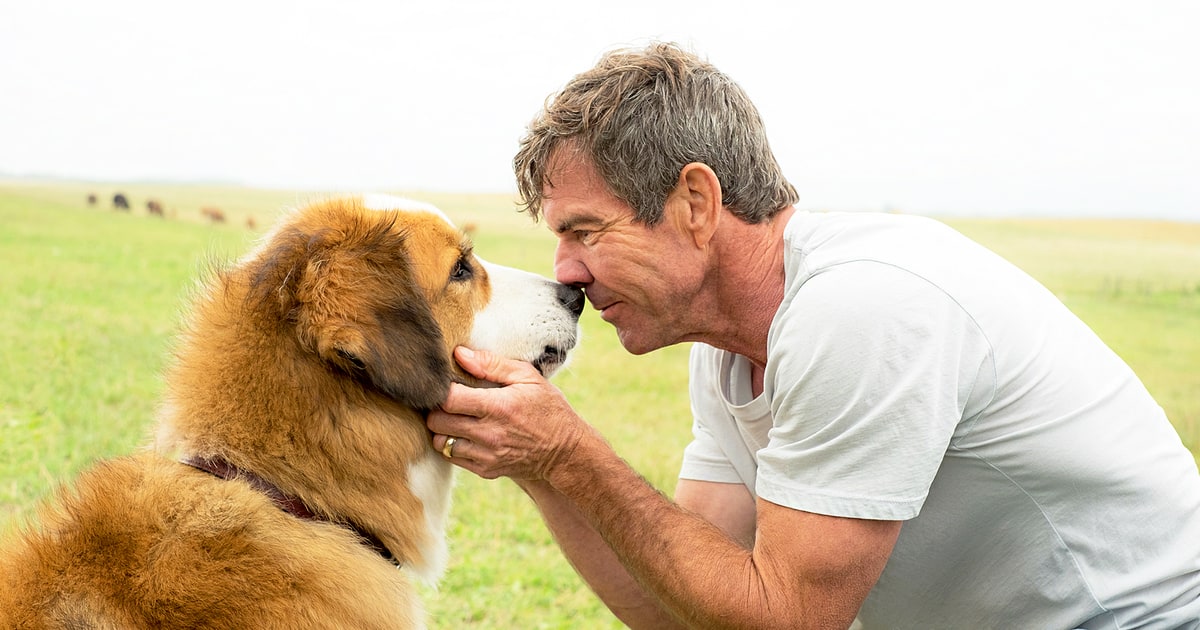 I would like to preference this review by stating that I’ve seen dozens of these cute dog movies wherein a dog is cast as the hero that saves Christmas, foils a crime or brings a family together. I’ve seen dogs do everything: karate, become ghosts, go into space, play basketball, play soccer and too many stunts to count. I write this to let you know that I’m coming from years of experience before you decry my slightly negative review of the cute doggie movie.

I will give the movie credit in that it does aim for a higher goal than most dog-centric movie, seeking a more philosophical angle. The story is told entirely from the point of view of the dog Toby and, surprisingly, his thoughts are not all about food and fetch. One of his very first thoughts, voiced by Josh Gad, seems to be about contemplating his purpose in life. That’s quite the question for a puppy to pose. I thought all dogs pondered about was where the food was and which smell is where. Could this dog really be more of a philosopher than another brainless pup? Don’t worry, kids; Toby’s not above knocking over dinner tables, eating hot dogs off the ground and farting loudly in the car.

Despite a stumbling start to life, Toby falls for his child owner Ethan instantly, forming the basis for the classic tale of a boy and his dog. Based in a 1950s rural community, it’s that familiar flavor of midwest mundanity where racial concerns and space race are mere background elements to the more immediate issues of Ethan making the football team and Toby causing a mess of a dinner with the boss. I will give the dinner scene some credit for its unfunny aftermath. The scene itself is portrayed with the expected amount of slapstick and silly music, but follows with the father becoming a bitter alcoholic about not being able to work closer to home. It isn’t long before dad goes bad and starts beating his wife, leaving Ethan to defend himself while Toby barks at the wife beater. But was it Toby who drove him to this point? Something to ponder for the obligatory noble segment where the dog pulls Ethan out of a burning building.

Just when I think the film has settled into its Homeward Bound style of soft drama, the plot reaches the moment early where Toby must pass on from this world. Surrounded by his family, including a college-bound Ethan, he passes away into the next life, which happens to be the life of another dog. Now reincarnated into a different dog, and a different movie, Toby becomes a German Shepherd police dog that works with a bitter cop. Shot on the job, Toby then becomes a Corgi and then helps a woman go from a binge-eating college student to wife/mother. One death later, Toby is a St. Bernard-Australian Shepherd mix and abandoned by abusive owners.

And by now I’ve lost all interest in whether or not Toby will ever find his master Ethan. Sure, Ethan’s time on Earth is limited where as Toby receives apparently unlimited tries to reincarnate, but what will happen if Ethan dies before Toby serves his purpose? Will he continue to reincarnate and find someone else to bring joy towards? Or will he go to hell or purgatory or something? What is at stake here?

Why am I asking such questions? I shouldn’t be. This is mostly a soapy dog movie for the easily-weepy to push out some tears at dogs dying and giggle when they topple over tables. I could buy that just fine as meaningless fluff, but this whole element of a dog trying to find his purpose in life is too meaty of a plot for this picture to handle.

In the rather low expectations of the dog movie subgenre, A Dog’s Purpose tries to add in a Terrance Malik angle to its rather simple story of a dog that warms hearts. There’s no philosophical treat at the end of this furry journey, as Toby’s hypothesis for life is nothing all that special. I couldn’t help but think of Monty Python’s The Meaning of Life’s ultimate answer to the big question: Be nice to people, avoid eating fat, read a good book every now and then, get some walking in, and try and live together in peace and harmony with people of all creeds and nations. That answer was intended to be humorous for being so obvious and underwhelming, but Toby delivers this statement as if it is an emotionally-moving revelation. And I’m sure it would be, if I were a dog. Too bad I’m not as amazed by the simplicity of catching a ball, the easy sadness of spending a night in the shed or the fun of knocking over dinner tables. Maybe then I wouldn’t question why a dog needs to question existence itself, in between farting loudly and wrecking dad’s dinner party.