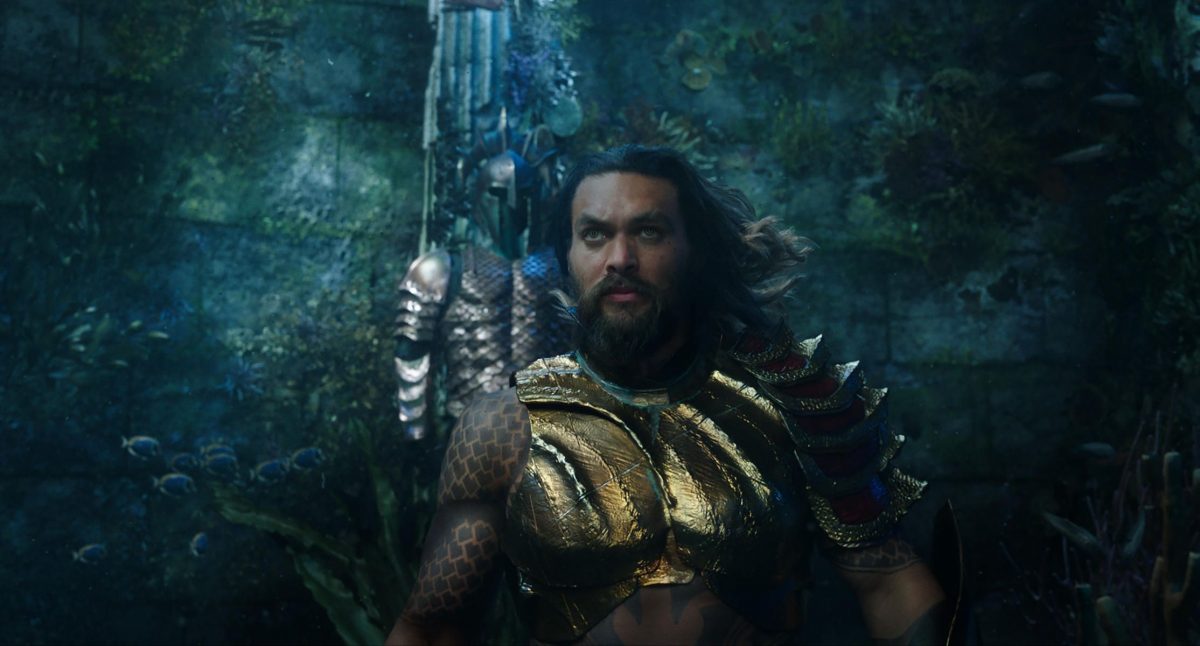 I dread making this statement but I feel as though I must; I dug Aquaman before he was cool. At least the cool that I’m sure many are experiencing with James Wan’s Aquaman movie, championing the media stigma of his past appearance on Super Friends making him look like a dope. Consider how the oceans are vast and not entirely explored a realm, teaming with untold discoveries. Also consider how Aquaman wields over this domain with his best girl Mera, able to control water to such a degree she could remove all of it from the human body in a few seconds. Wan is aware of all this and taps all the potential an Aquaman movie is worth, patchy and messy as it may be.

Wan’s film covers a number of different tones. Arthur Curry (Jason Momoa) bursts into a submarine being overtaken by pirates and it’s a hardcore bar brawl of fists launching bodies and heads slammed into metal pipes. He is informed by the Atlantian Mera (Amber Heard) of a war brewing in the kingdom of Atlantis and he ventures into an underwater and neon metropolis of synth and lasers. Later, there will be treasure hunting in the desert with a sillier tone as the soundtrack shifts to a more Indiana Jones style vibe. A boat trip into waters infested with piranha people turns into a darkly lit horror film. And you better believe the final battle of warring factions mounts up the scale to Lord of the Rings levels of epic fantasy.

That’s a lot to take in but I think the division in the film’s globetrotting and timeline helps keep things fresh and prevent the dense story of kingdoms and lineage from becoming too murky. He also keeps everything exciting and full of energy. The opening of revealing Arthur’s mother (Nicole Kidman) as a princess who fled to the surface world to fall in love with a human seems as though it would be a dry bit of exposition. And yet it features the single most entertaining action sequence of the picture, where Kidman fights off a small team of Atlantian soldiers trying to forcibly bring her back to Atlantis. We cut away from that scene to a grown-up Arthur, chugging beers and bashing bad guys, with his teenage training spread throughout the film.

Aquaman doesn’t shy away from aspects that could be deemed too silly to saddle for a picture with the bad-ass, bearded Momoa, embracing them with an earnest so that we buy into the fantasy. There’s no easy joke about Aquaman bickering with a laughing dolphin or a nosey fan questioning why he would eat seafood. I know the answer is because fish are stupid and Aquaman is not exactly friends with his minions but that need not be stated. Borrowing liberally from Geoff Johns’ comic book run, the film remains focused on the adventure and takes its lore with enough seriousness and levity to enjoy. After all, if Momoa doesn’t dig that orange and green scaley outfit, why should we?

The film is packed with so much rousing fantasy that there’s little time to question the strangeness of it all, working to the film’s benefit of always being engaged. When a backstory is too long, the transitions speed up. When conversations turn too stock with explaining the hunt for a trident, an explosion or action scene quickly save the scene. Wan seems aware thatit’s going to take a lot to impress the audience with an Aquaman movie and does his best to always keep it brimming with beautiful worlds and exciting sequences.

So much is happening here that I barely have time to mention the exceptional casting of Willem Dafoe as Arthur’s trainer, Dolph Lundgren as an aged underwater General, and Julie Andrews voicing the terror of the seas. Oh, and Yahya Abdul-Mateen II as the evil Black Manta, served up with enough pathos to be Aquaman’s nemesis. It takes some silly and dumb routes here and there, as with how Arthur knows of Jules Verne but not the novel of Pinnochio, but that’s par for the course of a superhero epic. While the film never quites settles on a firm tone, it sure has a lot of fun dipping its toes into many waters. Plus, not a trace of cinematic universe connected cameos or Easter eggs; Aquaman has this pool all to himself and he rocks it like no other superhero out there.