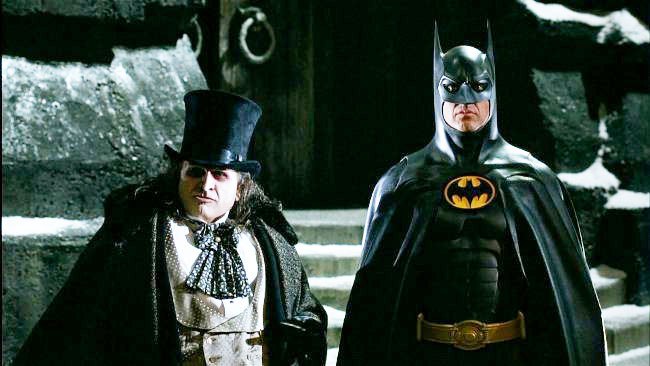 Of the many Batman movies released in the 1990s, Batman Returns (1992) is by far the darkest. Needlessly dark, in fact. It’s as if Tim Burton was so embarrassed to be making a movie about a man who fights crime in a bat costume that he was determined to put a bafflingly macabre and odd coat of darkness on this superhero franchise. He may have achieved his goal of distancing himself from the usual Batman hype, considering that McDonald’s pulled their Happy Meal tie-in deal.

The movie begins with perhaps the most depressing of openings in any Batman movie: The abandonment of an ugly infant child into the river. Due to an incident with their baby attacking a cat, the Cobblepot family decide that the only sane thing to do is literally send their child downriver. I can only imagine how they would respond if their toddler tortured the dog. The unlucky baby Oswald ends up at an abandoned zoo where he is raised by penguins, hence his villain name of The Penguin (Danny DeVito). He grows into a bitter, dirty and hate-filled human with penguin-like features that desires revenge on a city that shunned his ugliness. He also somehow has some colorfully dressed henchmen to do his bidding.

Before you can shed a tear for Penguin’s plight, the movie leaves his pathos and steers us towards another villain. The white-haired Max Shreck (Christopher Walken) wants to control an energy monopoly on Gotham City. Blackmailed by Penguin, Shrek devotes his resources to making Penguin socially acceptable and eventually a mayoral candidate. If Penguin can make his way into office, Max will be able to build his own energy factory without interference from the current mayor. It’s rather easy to run for mayor of Gotham considering Penguin’s lack of political experience, his shadowy past and his short temper which leads to biting off noses.

And then there’s the third addition of Catwoman (Michelle Pfeiffer). Her origin is perhaps the most confusing of all as Selina Kyle, a secretary of Max who was tossed out a window for knowing too much. When she lands on the cold pavement, she is somehow nursed back to health by a swarm of cats. Animals sure do a lot of parenting in this picture. The cats have apparently endowed Selina with nine lives, a spell they must have cast amid trying to eat her body. One room-destroying mental breakdown and S&M outfit later, she is ready to play the role of Catwoman and get revenge on Max. Or just go crazy as she runs rampant in a department store for no reason, whipping the heads off mannequins and making the building explode.

Where is Batman in all this? Once more played by Michael Keaton, the titular character is more aloof than he was in the previous picture. He doesn’t have much to do aside from punching a few henchmen and stopping Max’s evil scheme. But he isn’t much of a hero in how his Batmobile is easily sabotaged by henchmen and even fails to save a woman from being murdered by bats. There’s a romance that develops between Batman and Catwoman, but it never reaches the erotic tension that is greatly implied. How sexual can two characters be when they spend all of their romantic moments dressed up as a tire and a suitcase?

Batman Returns thankfully has a strong cast and unique visual style in an attempt to cover up its murky tone and muddled story. But Burton’s trademark style of Gotham City, with its gothic design and costumed henchmen, can only go so far to make one overlook the shortcomings of the characters. I didn’t feel anything for Penguin’s sob story, Catwoman’s sexiness, Max’s desire for power or Batman’s mysteriousness. The movie attempts to be dark and noirish, but features surreal moments of comedy as when Batman adds record scratches to Penguin’s audio admission of public manipulation. The lack of maintaining a consistent tone or narrative gives this aimless production a stylishly bitter nihilism – something that feels out of place for a Batman movie.