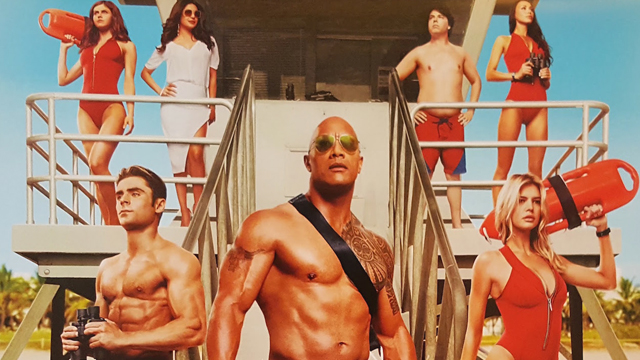 Baywatch was the most trashy of 1990s television that started out as a suggestive lifeguard drama and spun itself into the craziest of spin-offs where characters solved ghost mysteries at night. No, seriously, look up Baywatch Nights – it’s real. The show at least started off knowing what it wanted to be with daring rescue drama and plenty of slow-motion shots of Pamela Anderson’s boobs bouncing and David Hasselhoff’s hairy chest glistening. That’s more than I can say for this big screen adaptation that can’t decide what movie it wants to be. Is it an R-rated puke-fest of a comedy or a hard-nosed adventure of daring feats? Is it an intense story of water rescues or a silly caper of foiling a drug scheme? It is all these and none of them – the jack of all cliches and fool of them all.

Dwayne Johnson is such a charming actor, but even he can’t perform enough character CPR to revive this aimless script. He plays Mitch Buchannon, the role once held by Hasselhoff. He certainly doesn’t look the part considering the lack of hair and I’m willing to bet he’s more witty and lovable than Hasselhoff ever was. Johnson is actually too likable as the lead lifeguard, in fact, to the point where he is a character with no arc, flaws or an interesting past. Don’t feel too bad for him, however, as nobody is given much development here. Of the new recruits Mitch takes under his wing, one is a tubby nerd by the name of Ronnie (Jon Bass). Will he prove himself as a successful lifeguard and win the heart of the lovely C.J. (Kelly Rohrbach), a girl he figures he doesn’t have a chance with? Sort of, but it doesn’t matter. It’s established very early on that Ronnie has already won the heart of this woman with hardly any irony. It’s nice that a nerd finally gets the girl with genuine spirit, but what’s left for Ronnie to work towards?

Zac Efron is the troublesome new trainee Matt Brody, in need of a serious attitude adjustment. He was a former Olympic athlete that finds himself desperate for a job after being disgraced when vomiting while swimming laps. Efron, too, can be a solid comedic talent, but not in a movie that requires him to stare at boobs, fondle testicles and talk about penises. All he can do is follow Johnson’s lead by taking off his shirt as often as possible and lead every conversation back to penises. Could their characters be gay for each other? The movie certainly seems to set this up as all girls have their boobs promptly covered and all boys have their privates parts not so private. This would make it seem to be more of a Baywatch for the ladies, but unless women like seeing penises lodged between wood planks or the phallus of a corpse, there’s nothing all that sexual here.

There is some ribbing of the Baywatch TV series in how characters will comment on the ridiculousness of slow-motion and how strange it is that lifeguards would pursue criminals in a manner similar to cops. But is it really that knowing? They mock slow-motion and yet used it over and over as if it really is a cool effect. Efron states how absurd it sounds for lifeguards to abandon their posts to hunt drug dealers. This would be funny if it weren’t for the shrugging off of this questioning and then continuing to bring it up throughout the movie. There’s even a point during the investigation when a dead body is found on the beach while Johnson and Efron are undercover in silly outfits to foil a drug running scheme. Seriously, why did they abandon their posts? Johnson’s character seems committed to protecting his beach, but drops all his responsibilities at the drop of a hat to follow a trail of criminals. Is this movie about lifeguards or cops?

Baywatch comes loaded with so much junk that it almost becomes a blur of disgusting disappointment. I really don’t care about some buxom Bond villain trying to sell drugs and kill politicians so she can buy the beach property. I grew tired of the comedy that involved Efron talking about his penis for the tenth or eleventh time. I’m not even that grossed out by the sight of Efron swallowing embalming fluid dripping off human corpses – more repulsed that he would stoop so low. And Johnson is called upon for the most forgettable role of an action protagonist that spouts throwaway one-liners in between punching people and smashing through walls – a role that he could perform in his sleep. Some movies can take bad television and carve out something more, as was the case with 21 Jump Street. Baywatch, however, comes off more as a nasty mixture of tired premises and characters, trying to find comedy in a dumb premise for a TV series that did a better job making fun of itself than this movie could ever do.