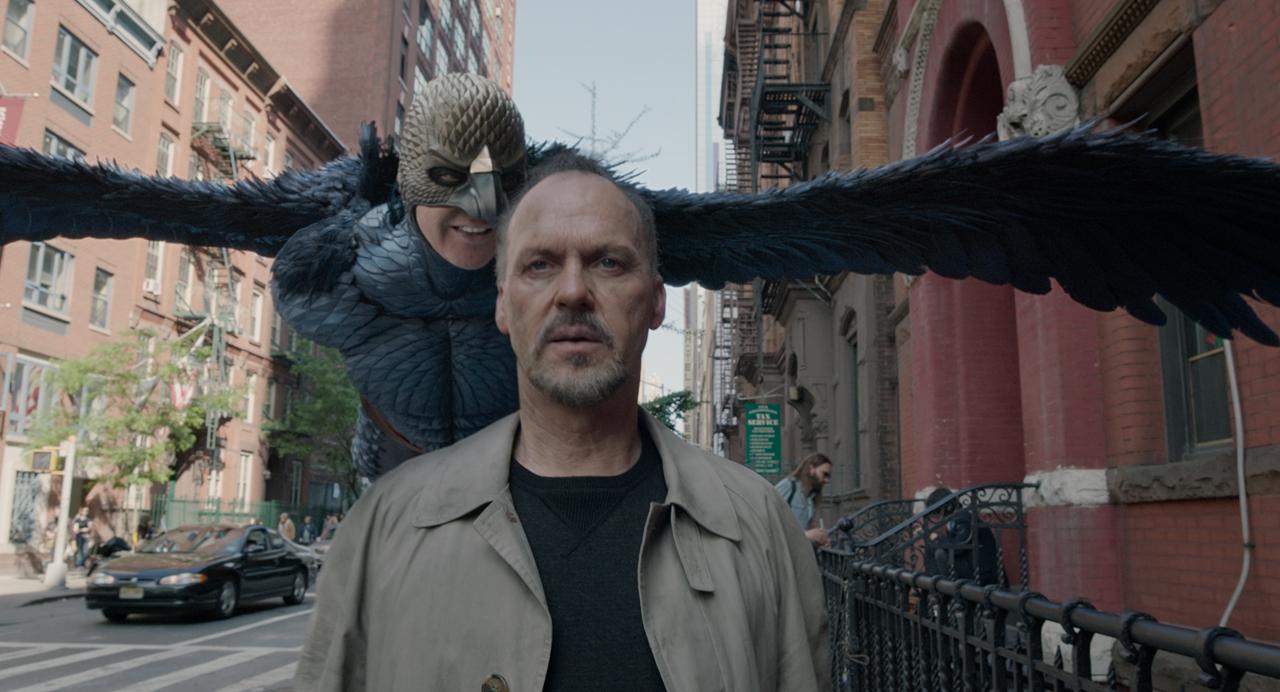 In the very first shot of Birdman, we see a fireball descend from the sky. The movie then cuts to Michael Keaton’s character Riggan Thompson levitating in his dressing room in nothing but his underwear. His grisly voice can be heard and although his back is to the camera we can tell it is not his natural voice. The voice remarks “How did we end up here? This place is horrible; smells like balls.” As we soon learn, Riggan is in a terrible place: a theater filled with people just as egotistical as himself. But this is his own grave that he dug so deep he can’t help but laugh to the bottom when the dirt entombs him. And we the audience are taken along on this rollercoaster of a maddening ride through his messed up mind and the destructive personalities surrounding him.

Riggan Thompson is a washed up actor who used to be well known in the 1990’s as the star of the Birdman superhero movies. The poster of him in the Birdman costume looms over his dressing room as a painful reminder of what he used to be. On his TV, an entertainment report focuses on Robert Downey Junior’s Iron Man franchise being a billion dollar success. It’s another life Riggan loathes, regrets and envies. Birdman now haunts his mind as another character, beating down his own ego as he tries to force Riggan back onto the easy street of doing superhero movies.

Birdman is the little voice of Riggan’s doubt that he is not a stage actor, writer or director. He constantly questions why he bothers trying to create a stage production of Raymond Carver’s short story “What We Talk About When We Talk About Love”. Riggan is constantly at battle with this aspect of his psyche that has made him so far gone he starts hallucinating superpowers. In private, we see him fling objects around his dressing room with his mind. On the streets of New York City, he soars above the masses like a graceful bird. The next thing he knows, his dressing room is in shambles or he’s standing on top of a building ready to plunge. He doesn’t relay his personal demons to anyone he works with and the few he does brushes it off as jitters.

Having once been admired in the spotlight, Riggan’s respect has diminished in his inner circle. His daughter turned assistant (Emma Stone) has a bitter disrespect for being ignored by her dad as a child and into adulthood. His new lead actor (Edward Norton) looks down on Riggan being a man of the stage directed by a man of the silver screen. His lead actress and love interest Laura is bitter and torn about them not being able to have kids. His lawyer Jake is so angrily concerned with the bottom line that he is more than willing to lie his ass off to Riggan just to get the show off the ground. And even the local critic Tabitha despises the man so much she flat-out tells him she’ll write a scathing review of his play before she witnesses one scene.

Why does Riggan surround himself with such detrimental characters to his psyche and bank account? He needs them. Without them, he would have no reason to climb, no reason to bleed and no play to create. They are the challenge that reminds him of how alive he needs to be for the greatness he hopes to achieve.

The cast of the movie is perfectly playing to their personal strengths. One has to wonder how much of Keaton’s performance is based off his personal experience playing Batman in the Tim Burton movies. While arguing with his Birdman persona about how he cannot return to the superhero movie game, he shouts “it’s not 1992 anymore” referring to the last time Keaton portrayed Batman in Batman Returns (1992). He then lifts up his shirt in the mirror to display everything that he’s become from his scalp to his belly comparing himself to a “turkey with Leukemia.” He even mentions to interviewers in the film his reasoning for passing on Birdman 4, possibly referring to Keaton’s true reasoning for not going along on with the other two Batman films of the 1990’s.

Edward Norton also plays a bit of a meta character in the way he nearly destroys the production with his backstage and onstage tempers. He challenges Riggan in rehearsals, throws a drunken tirade during a preview showing, wrestles Riggan to the floor in the break room and even goes so far as to nearly rape one of the female actors on stage in a bedroom scene. And yet he seems to merely be playing the role of the diva until he retreats to the roof for a cigarette where he unloads his honesty on Riggan’s daughter. He laments how he’s never himself until he’s on stage. It’s possible he’s never himself similar to the way Peter Sellers joked that he had his true personality surgically removed.

Birdman was directed by Alejandro Gonzalez Inarritu, best known for his “trilogy of death” that included Amores perros (2001), 21 Grams (2003) and Babel (2006). All three of those films were told in a non-linear, anthology format of connecting stories. While those were emotional journeys of trying to find life after death, Birdman attempts to find some life before death. Or maybe life during death as there are many who theorize Riggan officially kills himself at several points in the picture and that the final act is his own purgatory vision. Whatever your theory, Birdman is an infatuating and dizzying character drama that I will absolutely love examining and dissecting for years to come.