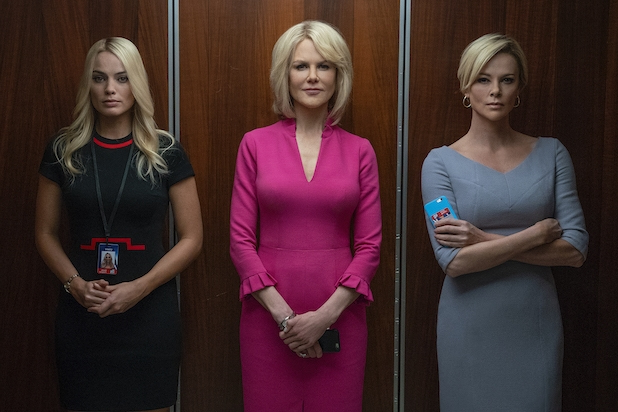 You don’t even have to look up the credits to know this film was by one of the co-writers of The Big Short. Within the first few minutes, we’re given a crash course on the Fox News beast that brewed the scandal of Roger Ailes. We meet a few people and get an idea of how the news network functions on provocation and titillation, how Ailes operates, how the news is generated, and where everyone works. Without a moment to take it all in, we’re thrust right into the scandalous environment of 2016 and never given room to breathe in this picture’s maddening onslaught of an all-encompassing and thematically-muddied biopic.

We meet a few key players that played the most prominent roles in this ordeal. Charlize Theron melts into the role of Megyn Kelly, as does Nicole Kidman as Gretchen Carlson. Both become key targets for Ailes (John Lithgow) in how they plan to attack the network for the unwanted sexual advances of their boss. Kelly dared to speak up against Donald Trump in the debates and became little more than a punching bag for the brash candidate and great television for Ailes. Meanwhile, Gretchen goes to bat for her sexual harassment case after being demoted by the network and essentially on her way out the door.

Those are just the small notes on the case and it’s unfortunate that the film doesn’t really explore much else in its mad dash to hit all the key points and little else. Most of the film becomes lost in staging an intern played by Margot Robbie as the latest target of Ailes to showcase how his evils continue when nobody speaks up everybody just goes with the flow. While Robbie’s character learns more about the dangers when getting involved with a lesbian fling of another intern played by Kate McKinnon, this does little more than explaining the mindset. And throughout the film, that’s about all we get, as though we were completely oblivious to a lot of the twisted drama going on at Fox.

Even more crowding such a story is the constant cameos by players who weren’t directly involved but were still present and make up the background. Chris Wallace is brought up because he was merely there during the debates. Sean Hannity and Bill O’Reilly show up but more like shadowy figure, rarely seen that they become more terrifying by their lack of appearances. Some casting seems at least a little essential and not too shabby, as with Malcolm McDowell as Rupert Murdoch and Richard Kind as Rudy Giuliani. They occupy one or maybe two scenes. Whatever the film has time for.

The best that can be said of Bombshell is that it at least has its heart in the right place as well as some stellar acting behind it. But at the end of the day, there’s a sour taste for the need for women to stand up in the workplace is given little more than lip service and a stylish music video. Is that really enough to make this biopic seem like anything more than a TV movie of the week? Maybe not. Such a scandal deserves more than such gloss, spiffy as its direction may be.