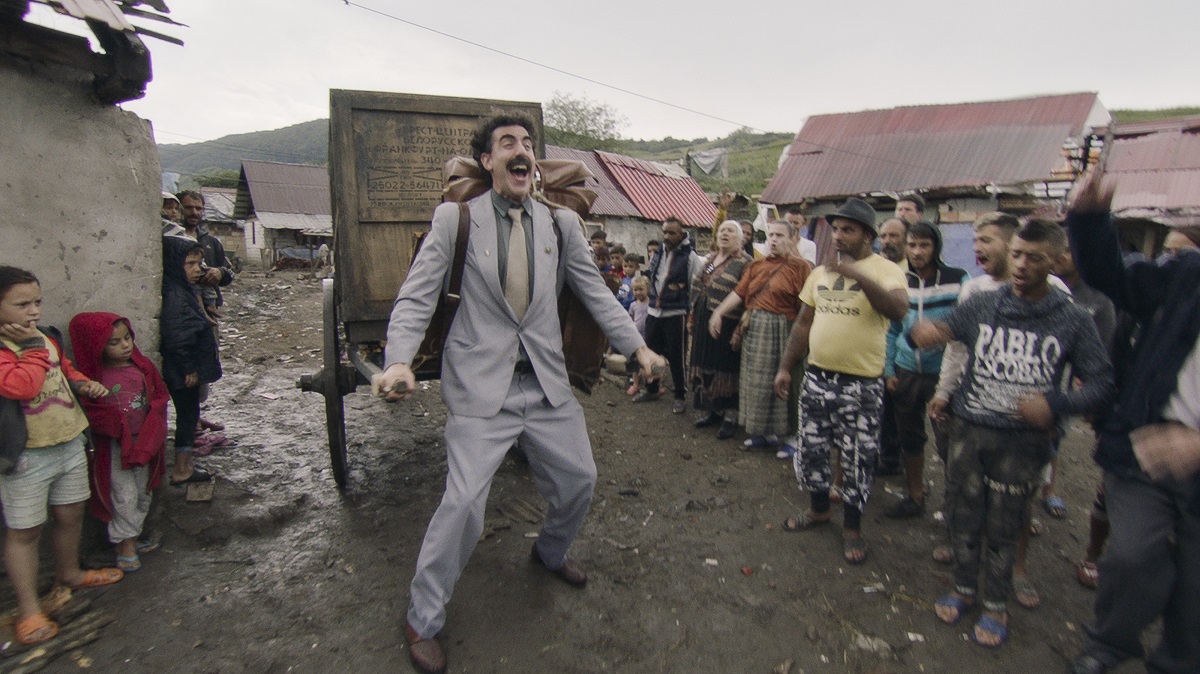 Patton Oswalt made a joke about why he didn’t make his most recent stand-up routine about the Trump administration. He compared the administration to a scene of a truck full of monkeys high on PCP crashing into a truck full of dirty diapers. To make a bit about such immense absurdity would seem pointless, where comedy just can’t top the ridiculousness of reality. The sequel to Borat tries to do just that and the result is more knowing smirks with a side of eyeroll.

Sacha Baron Cohen’s classic character of pranks about America’s faults has risen from the grave because somebody somewhere said “we could really use Borat about now.” Well, Borat returns and, as with any movie revival, the question of relevance is asked. Of course, the character’s purpose is clear now more than ever, given that Borat brought the rope for bigotted conservatives and cautious liberals to hang themselves in how they dealt with a foreign individual. Nowadays, Borat doesn’t even need the rope for conservatives. Thus his act is more of a slight nudge off the gallows, perhaps?

The bride is his estranged daughter by the name Tutar, played in a remarkable performance by Maria Bakalova. Though bound by the backward logic of her fictional village, Tutar shares the same amazement and wonder for American culture. She has grown up knowing of this land as that of a fairy tale, almost literally with her favorite animated film being a revision of Cinderella retooled to be about Melania Trump. Much like Borat, her adventures into America will have her learn how much she knows to be true and how much was a lie. Namely, her vagina will not eat her if she touches it, despite what the Kazakhstan manual on women suggests.

One area where this new film succeeds over the previous is that there’s a better arc for Borat and even Tutar. They set off for America with backward beliefs and find themselves as completely different people by the end. Tutar learns to be more independent and suspect of other’s ideas about women while Borat learns to love his daughter and not be as suspect of jews. Even more remarkable was how this film’s story, which clearly started long before the Covid-19 pandemic, finds a way to make the Coronavirus a key plot point.

Of course, however, a lot of those seeking Borat’s return will not initially be seeking the story. They’ll be here for the bits and ambushing interviews. And why wouldn’t they? This is perhaps the most important thing that Borat has done as a character and he continues to draw out America’s vile beliefs once more. The good news for Cohen is that he doesn’t have to try too hard to probe as there is no shortage of conservatives willing to tell you how Democrats are drinking the blood of children. The bad news is that, 14 years ago, this would’ve been Borat’s joke. It’s no longer a joke now. The public has become Borat and this is more or less a handing of the torch.

Cohen finds new ways to continue the joke, as Borat had become too much a household name over the years, his catchphrases repeated with the same tedium as Austin Powers. Thus, Cohen dons new disguises to blend in better and perfectly fool those he interviews into revealing their true nature. There’s a remarkable contrast in reactions to where he dons these new looks. When the character is at his lowest, he dresses up as a Jewish character to enter a synagogue to await a shooting but is instead taken in by two kind, patient, and understanding Jewish women who look past the getup to see a human being. When Borat throws on KKK robes to covertly enter the CPAC, few conservatives even bat an eye as he ambles about the hotel identifying himself as Stephen Miller.

Borat certainly hasn’t lost his touch in trying to push people to their limits for how much they will accept of him. During the Covid-19 pandemic, he shacks up with some QAnon folks who regale him with stories of the Democrats being pedophiles and Borat agrees with them about fake news. He grows chummy with them and tries to probe how accepting they’ll be when he exercises in front of them with an erect penis. He’ll also venture to an anti-mask rally to sing a song about how far conservatives are willing to go in killing journalists and Democrats. It’s like shooting fish in a barrel where the fish are just begging to tell you water consumption is a government hoax.

This is all pretty par for the course until the climax of Tutar trying to interview Rudi Guliani and offer herself to him. The interview is mostly played up straight with a few revealing bits about Guiliani wanting to eat a bat if it was with a pretty lady. With Guiliani being so flirty and touchy-feely with Tutar, she makes her move by offering to take his microphone off in her hotel room. Borat only enters to end the scene once Guiliani lies down on the bed to either tuck his pants or prepare for sex. Whether or not Guiliani was prepared to whip out his penis for this journalist is less important than the fact that not only could Guiliani be coerced into the hotel room of a reporter but that he could be duped. Think of how easy it is to goof on such a high-profile politician.

By the end of the picture, Borat will make a change that I have no doubt will have many reactionaries rambling that Borat has gone full-woke, kowtowing against conservatives as though he never did so before. But this shifting towards Borat being more about feminism and against America’s damaging aspects of culture is not some degradation of the characters. It’s the mere growth for him not just of his own narrative of connecting with his daughter but also for how wildly the culture has shifted towards believing his nonsense.

Borat’s old-world ways of embracing superstition and xenophobia are no longer a joke so how can the character still be seen as satirical? In order for Borat to still be funny and relevant, he must change his suit, even though Cohen states he never washed the Borat disguise for maximum potency. While Borat’s sequel doesn’t quite hold the same bite of humor, it’s rather astounding how much of it is easy-pickings that can evoke a dark laugh. Not quite “very nice” material but still a nice and necessary comedy.