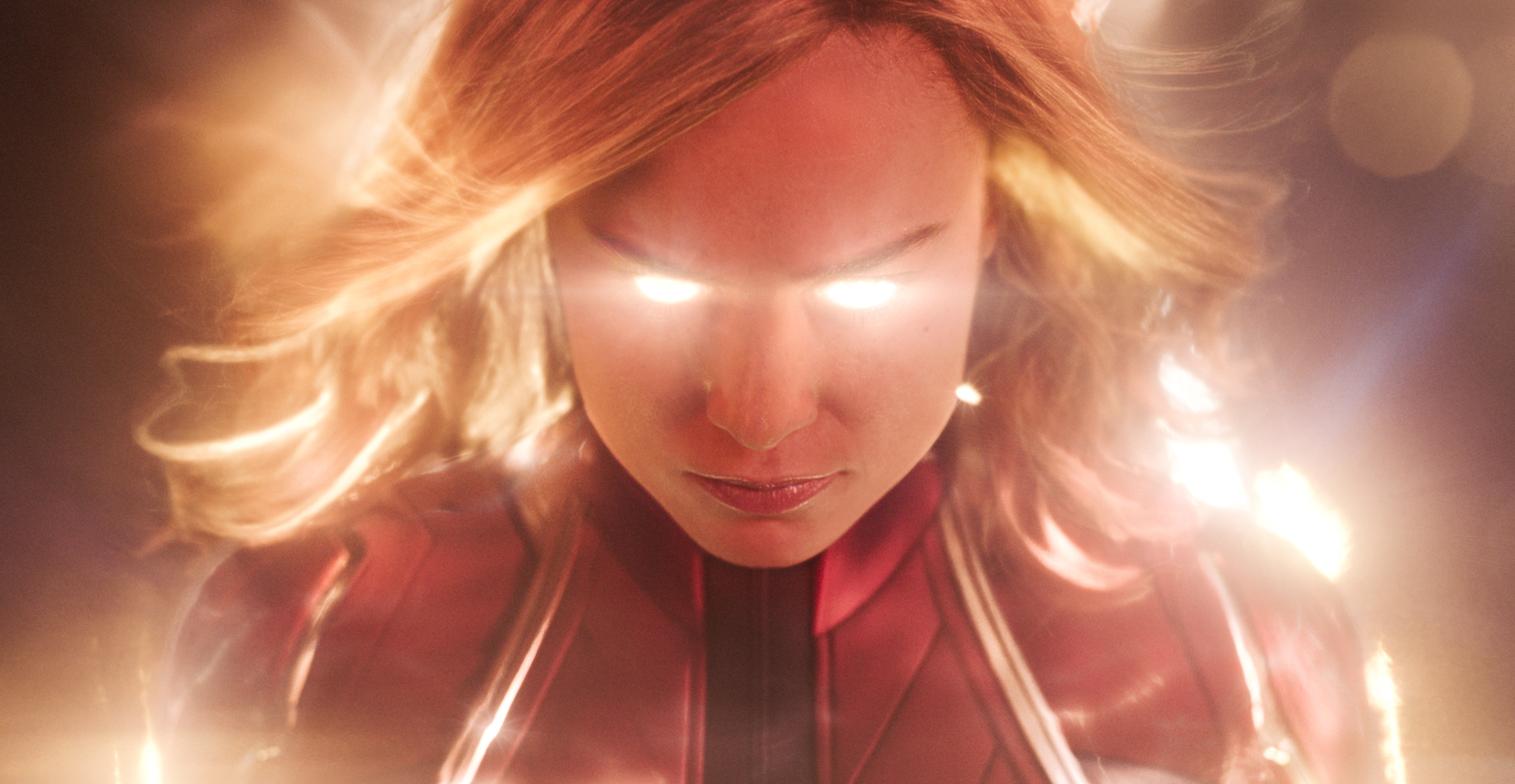 Captain Marvel joins a long line of Marvel Comics heroes with their own solo movies. But her origins are more unique. It’s not just because her story weaves into the greater expanse of the intergalactic Marvel movie landscape. It’s not just because her origins are established in the setting of the 1990s with numerous references and gags of the era. It’s not even due to the unique spy angle. What ultimately makes Captain Marvel a distinct hero, past all the superpowers of blaster hands and flying tech suits, is her drive to define herself after a past most sordid. Where other heroes need to redefine their personality for growth, she proceeds down a more challenging role of defining herself past being just another superhero.

Before Brie Larson becomes known as the titular hero by the Earth name of Carol Danvers, she is known to the galactic Starforce of the Kree empire as Vers. She has been considered an unorthodox warrior of the force not only for her unusual powers of expelling great energy from her fingertips but her many dreams of an Earth pilot. Why she is having these dreams are questions never fully answered by her mentor of combat superior Yon-Rogg (Jude Law). Nor is it divulged by the Kree’s supreme intelligence, an entity that appears to her as a mysterious and familiar figure played by Annette Bening. But there’s no time to answer those questions when there’s a mission fighting off those pesky Skrulls, pointy-earned aliens with a knack for transforming into anybody, making them the perfect spies for infiltration.

Vers soon starts coming into her own as the battle of Kree versus Skrulls shifts to 1990s Earth. While forming a chummy relationship with SHIELD agent Nick Fury, appearing as a younger Samuel L. Jackson, she comes to learn not only of her past but of a grander scheme that could reshape the galaxy. While discovering all this, however, she also begins to subscribe more towards her own philosophy rather than the cards she was initially dealt. And it’s a noble one for a superhero choosing to carry on a legacy that promotes the least amount of war and benefits the most people. That being said, she still kicks a lot of butt and has a lot of fun doing it. When Skrulls can transform into old ladies, it’s quite the sight to see Danvers engaged in fantastical combat with an aged lady delivering acrobatic kicks.

Captain Marvel finds its own vibe and voice to avoid easy comparisons. It never takes itself too goofy to go overboard with the 1990s references, despite shoving a Blockbuster Video, True Lies cutout stand, and Radio Shack all into one scene. It always felt like there was just enough quips to create a sensible dose of silly which should be present for a film with elf-like shape-shifters, strange alien tech, and 1990s absurdities, where playing audio on a computer has a certain amusing tension for the load times. But the story always feels earnest and interesting, loaded up with enough twists to make itself most worthy of a spy picture, where alliances shift and conspiracies are revealed.

Deeply commendable about the picture outside of the solid performances is how well the story weaves into the MCU timeline. Naturally, for dealing with the Kree, there’s a lot of Guardians of the Galaxy tied into this tale, complete with a few familiar faces the appear much younger and less deformed. We even learn of a few events that led to certain SHIELD developments, some so strange and silly they had to be classified for the good of Fury’s career, including one very useful and disgusting pet. Thankfully, this management of the script to fit the MCU never waters down or shifts focus from the central story of Carol Danvers learning to become an Avengers before the Avengers were ever a thing. Brie brings out a certain sass and bravery in her adventure, most palpable with emotion in her somber scenes with Lashana Lynch as a fellow pilot. And while Jackson does deliver a more youthful performance than his more cool Nick Fury persona of current Marvel movies, he never lets that special effects makeup make him break out too far into shouting territory, bring more glee than insanity for an action picture where he finds himself keeping up with destructive aliens. Despite the movie taking place in 1995, he never goes full Die Hard with a Vengeance.

What I found most exciting and intriguing about Captain Marvel was how the energy only grows stronger as it proceeds, becoming more than just a smackdown in the third act. The film starts off dumping out a truckload of scattered information like but soon starts piecing it together with great vigor that it becomes enticing to see how this all ends. Even when we know Danvers and Fury will survive this whole ordeal, there’s a thrilling tingle to see how the two of them will resolve the war between Kree and Skrulls. What comes of this ordeal is a film that not only fits snugly into the Marvel Cinematic Universe but also gives an attitude to Captain Marvel all her own, shirking any doubts of this sci-fi romp merely being Guardians of the Galaxy with a 1990s aesthetic. This is less a space opera and more of a space spy thriller, backed up by some TLC and No Doubt. And with how the film strives to build up its heroine as one that triumphs over adversity with an inspiring twinge, Captain Marvel soars.