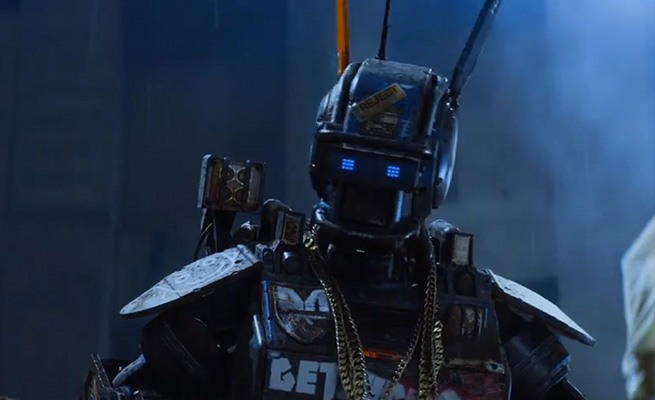 Director Neil Blomkamp seems to be stuck in a time loop. While he initially displayed fresh talent with his 2009 sci-fi hit District 9, he fumbled with Elysium in 2013. Both movies took place in South Africa though Elysium was much more heavy-handed with its blunt message of a corrupt future. I was willing to write that picture off as studio meddling given the increased budget along with bigger names in the cast. Even Blomkamp admits that film was a misfire. And now I find myself regretting such forgiveness with Blomkamp’s Chappie, yet another blunt allegory taking place in South Africa. You fooled me once, Neil.

In this version of South Africa, robot policemen have been implemented to control the crime of Johannesburg. The robots are pre-programmed thanks to the coding of Deon (Dev Patel) but frowned upon by military developer Vincent (Hugh Jackman) who would rather have the machines be controlled by human beings ala drones. While Vincent’s concerns are more than valid, he’s the bad guy in all this in that he wants bigger robots. Deon, by comparison, is a kinder soul favoring artificial intelligence over weapons. He finally creates an A.I. which he considers a big achievement while the brass won’t even humor his experiment. Deciding to proceed without them, Deon swipes one of the robot cops to upload his new creation of life. The problem is that Deon only does so under the threat of criminal Ninja and Yolandi (the South African rappers playing more-or-less themselves). They want the robot to help them commit crimes. Deon just wants him to exist.

When the artificial intelligence dubbed Chappie (Sharlto Copley) finally comes to life, he acts as a curious and frightened child. He takes his first steps, learns to recognize objects, starts to speak English and familiarize himself with his new family at a progressive rate. At first, Chappie is a cute character that is lovable in the way he reacts with enthusiasm for painting a picture and fear after being damaged. But rather than bring Chappie to a unique level of intelligence and deciding what to do with the gift of life, he’s stuck on cliché route of trying to do good in a world where he doesn’t understand humans. And if the plot replication of Pinocchio wasn’t clear from the first appearance of Chappie, it’s smashed into the brain of every viewer by him reading the actual book.

What starts out with promise quickly turns into an irritating experience. Chappie is likable with childish ways of learning about life, but grates on the nerves as he continues to act cute and mimic the mannerisms of a gangster. Ninja and Yolandi have a decent dynamic and dilemma, but there was only so much I could take of Ninja’s street accent and Yolandi’s squeaky baby voice. Deon does little more than try to teach with his engineering mindset, Vincent just growls at those who despise his giant robot and Sigourney Weaver is just sort of there as the boss of the technology company.

By the time Chappie arrives at the third act, the script grows desperate with trying to turn Chappie into a real boy. Out of seemingly nowhere, Chappie somehow gains the ability to transfer the coding of the human brain into robots. That’s a rather big jump for a robot that went from giddily reading children’s book to writing advanced programming on the most mysterious human organ. And what he does with this newly acquired knowledge in the climax becomes almost laughable for how off-the-rails the story warps to fit its own narrative.

I would mention how fantastic the special effects are at displaying the title character, but does that even mean anything for being so seamless? Computer graphics have advanced to the point where we can have any creature of any texture appear on-screen as a believable character. There’s rarely a moment where you don’t believe you are watching a real robot walk, talk and interact with the human cast. But so what? It’s not like this is outside Blomkamp’s visual focus in how every film he’s done features a robot at some point. He’s perfected the art of directing a CGI robot in a live-action picture. So why not give us a story with surprise and characters that are not ripped from a cookie-cutter template?

Chappie may have some heart, but it needs a massive upgrade of ideas and originality. Neil Blomkamp borrows from the likes of Short Circuit and Robocop quite liberally that it made me wonder if he actually had a script or just a cobbling of visual ideas he wanted to see materialize. During the climax, Chappie does battle with a giant robot that looks almost exactly like ED-209 from Robocop – it even moves in the same jerky way. Throughout the picture, I was never all that interested in Chappie becoming a real boy. I was more concerned if Blomkamp will become a real director of hard science fiction again.