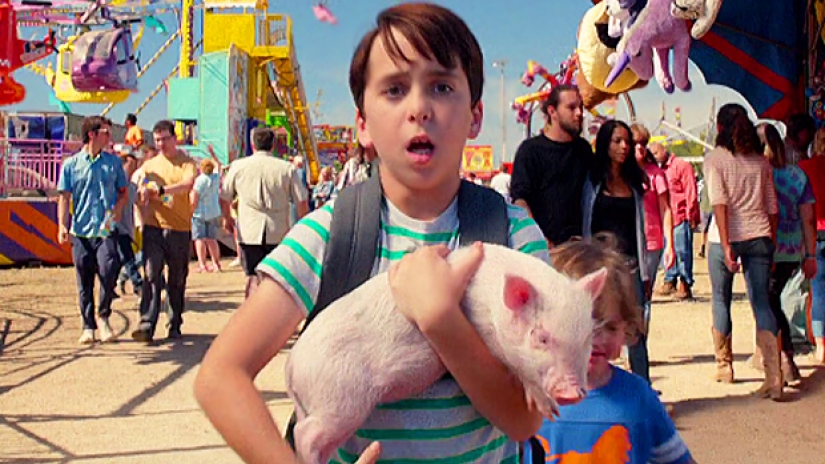 This is the black hole of cliche comedy that every road trip movie swirls around but rarely dares to enter. Diary of a Wimpy Kid: The Long Haul doesn’t just kamikaze into this abyss of laziness; it does so with almost suicidal tendencies. There is no desire here to be original or clever, relying more on the gross humor and slapstick gags that should have been retired decades ago. I can only fathom the filmmakers figured that today’s kids would be too young to have seen the old pee-in-the-bottle gag from Dumb and Dumber and too simple to not find anything foul about poop, vomit, and urine.

Sure, I’ve been around the block long enough to see dozen upon dozens of these family road trip comedies where everything is telegraphed, and none of it is funny. I’ve brushed off most of them as forgettable junk, but I found myself struggling to be passive with such a thoroughly disgusting film. Yes, I know kids films tend to be grosser, but I’m finding myself hard-pressed to find another film this year that is this foul and putrid with the bodily fluids. It takes the movie only a few seconds to feature a baby covered in filth, a butt pushed into a face, and a hand caught on a poopy diaper.

The unlucky kid whose hand is on the diaper is Greg Heffley, the poor kid who not only has to deal with his lame family, but also endure the torture of becoming the internet meme of Diaper Hands. I’d expect the sight of a kid in a ball pit who was unlucky enough to place his hands in fecal matter would be mocked and ridiculed by teenagers. But parents? Maybe I’ve been moving in the wrong circle of families, but I’ve never seen parents so cold-hearted that they’d record such a sight and post it on the internet while laughing gleefully at the sight.

But perhaps that’s the point. The world Greg occupies is a cartoon, hinted at in the beginning with stick figures for the introduction of his family. Everyone in his life has an unhealthy level of exaggeration to their character. Greg’s mother, played by Alicia Silverstone, is the typical mother that wants to toss out smartphones, force healthy foods on her kids and makes them listen to Spanish lessons in the car. Greg’s father is a mostly useless force that is more worried about work than mom’s reign of ethical terror. Rodrick, Greg’s brother, is a teenager so poorly written with a “blah” attitude he’d make the girls from Clueless look like refined royalty. And, of course, Greg’s baby brother Matty is present mostly to look cute and then gain laughs at doing things normal toddlers would never accomplish. Mom’s Spanish lessons pay off so well for this kid that he can have entire conversations with native speaking Mexicans. Uh huh. When does Wile E. Coyote try to blow him up with dynamite?

The plot is so by-the-numbers it pains me even to recount. Greg is bummed that part of his summer vacation is going to be spent in the car driving across the state for his grandma’s birthday. He’s far more occupied trying to find a way to clear his name from the endless onslaught of internet mockery. If he were smart, Greg would eventually figure out that this joke would pass, even faster what with the fluctuating infatuations of viral humor. But, no, Greg figures the only way to clear his name is by appearing in a video alongside his hero of a YouTube celebrity that pays video games as his job. And it just so happens that this celebrity will be at a convention center a few hundred miles away from his grandma’s house.

Will Greg change the GPS route to redirect his family towards the convention? Of course, he will. Will he regret it later on when mom gushes about how much she wants a happy family vacation? Obviously. Will there be a scene where the car breaks down, and the family is covered in mud while trying to dig the car out of the dirt? It wouldn’t be a bland family road trip movie without it. Every single gag is presented with the most obvious of setups and the most depressing of payoffs. Dad says he wants quiet in the car and everything turns noisy. Greg says he has to pee at the next stop that is 35 miles away, leading to him peeing in a bottle. How amusing. It’s not like I haven’t seen this bit in Dumb and Dumber with better anticipation and a funnier punchline.

All that junk I expected. What I didn’t expect was the more baffling gross-out humor that goes the extra mile. There’s a stop at a county fair where Rodrick devours deep-fried sticks of butter so he can puke them up while on a ride. The vomit appears in slow motion and shoots towards the screen as though it were intended for a 3D movie, which this movie is thankfully not. There has to be a reoccurring character on the road trip, but I didn’t expect it to be a fat bearded man that believes Greg dinged his car and proceeded to chase after him. Is this what’s funny to kids? Bearded adults, that will hound you across the state so that they can, I assume, beat the snot out of you? I bet if this guy did this to Greg, the snot would launch out of his nose and directly into the bearded guy’s mouth.

Even the most basic, the most simplistic of screenwriting methodology is chucked out the window with laziness. Rodrick needs money for his van but won’t find it on this trip. Dad needs to work while on the road to keep his job, but this never comes into question after two brief mentions. All subplots are either resolved off screen or abandoned to make room for scenes where a pig poops in the car and the luggage comically spills out onto the road. Even a reference to Psycho, the easiest of references for a skilled enough filmmaker, is botched for not including all the notable shots, making the film go down in flames with its attempt at satire. I couldn’t sympathize with any of the characters, especially when Alicia Silverstone has to poorly sing a Spice Girls song in the car not once, but twice. I take that back: I could sympathize with Greg for being stuck in the car for such a predictable plot with the most aggravating of characters. He doesn’t want to be around them or on this trip, and neither do I. I felt less sorry for Greg’s plight and more for his existence in this hellish cartoon world.

If it wasn’t obvious, this was my introduction to the Wimpy Kids movies. And I hope it is the end of my experience with Wimpy Kid movies, as I couldn’t wait to get off this ride of repulsion.