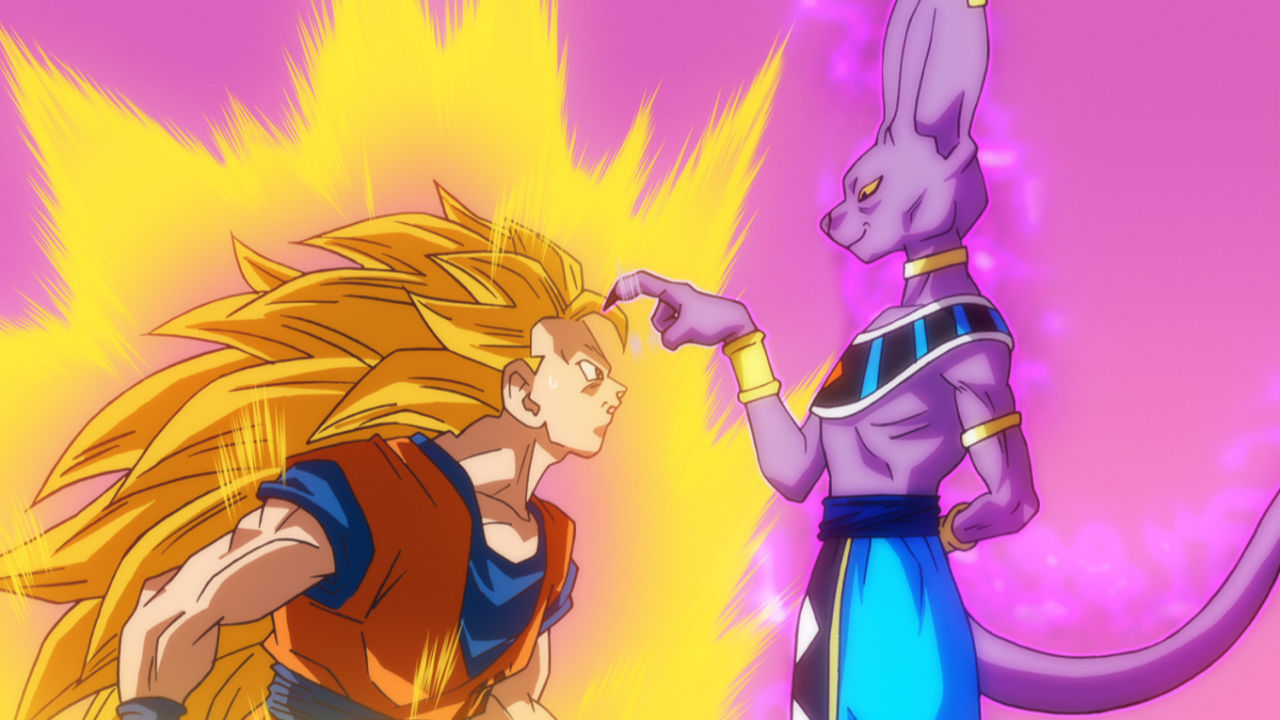 Dragon Ball Z is perhaps one of the most notable and iconic series of Japanese animation, but not for its quality per se. Semi-based off the characters of to the West, the series followed a host of characters in a universe of aliens and the mystical Dragon Balls that can grant any wish. The concept was neat, but the show itself was best known for its long and drawn out fights that would span several episodes. Sometimes the fights would even be extended through the most ridiculous plot devices of warrior pride or some other left-field revelation. It was an action cartoon soap opera. The movies of this franchise, most of which ran under 80 minutes, were mostly just a fight without the filler or the build up. So I wasn’t exactly looking forward to returning to this world of ridiculous battles after 17 years, especially since I felt that I’d grown out of that phase in my life.

Even with a wealth of recapping in the prologue, Battle of the Gods managed to grab my attention and entertain me as no other DBZ movie could. It wasn’t for the story which is your standard scenario of the alien that came to Earth to fight our hero Goku for the fate of the planet. It wasn’t even for the showy animation which did appear rather stellar with the bold colors and fluid fight sequences. It was ultimately the characters that pushed this movie out of the doldrums for which most Dragon Ball Z movies are known for. Rather than making our heroes and villains stoic figures that merely exist to throw punches and glare at each other, they are treated as comical goofs that seem to be aware they’re in a Dragon Ball Z movie. They know the drill and what’s required of them from this type of show but go about it with charisma and spirit that doesn’t fail to crack a smile.

The villain this time is a hairless cat creature referred to as Beers, the god of the destruction. After a lengthy cat nap for several years, he has awakened and sets his sights on the planet Earth for destruction. Despite his god status, he doesn’t scream to the heavens as he arises from his slumber with a fierce determination. Beers is much more relatable as a tired being slinking out of bed and finding it hard to face the day without some breakfast. He has a dream about facing off against some special warrior that can only be summoned by the hero Goku. Much like all Dragon Ball Z plots, it turns out that Goku and his Saiyan alien race are capable of some new technique and our antagonist wants a chance to fight against it. But before all the fighting begins, Beers decides to drop by a birthday party being held by Goku’s family and friends for their pal Bulma. It is there that Beers takes in the festivities and Earth’s best foods before finally deciding to wipe out the planet.

From that angle, the movie works supremely well. Vegeta, the only character that actually knows of Beers true destructive capabilities, scrambles around the party trying to keep the god entertained. He offers up food, nervously rationalizes the behavior of others and even performs some song and dance numbers. Meanwhile, there is a bingo tournament set for the party with the Dragon Balls as the grand prize which attracts some pint-sized villains. All these moments are genuinely amusing and I found it hilarious that the key event that sets off Beers’ violent side is being denied pudding. All kinds of hijinks like this continue until the kind-hearted Goku works up the courage and strength to go head to head with the main baddie. But, even during the fight, there is still some fun dialogue going on that prevents the film from being too serious for its own good.

While I did enjoy this movie much more than I thought, I’ve got to mention how this is almost a strictly fans-only production. There are far too many characters carried over from the TV series that someone who walks in cold is easily going to be confused by who they all are and where they are coming from. There is no straight character introduced to ground the movie so you’re either accepting of the crazy or you’re not. I really wish this were a film anyone could walk into cold as a sort of revival of Dragon Ball Z for a new generation. Tragically, this is not that film as it specifically caters to the fans that have been waiting 17 years for a continuation of their favorite characters. In that respect, they will not be let down.