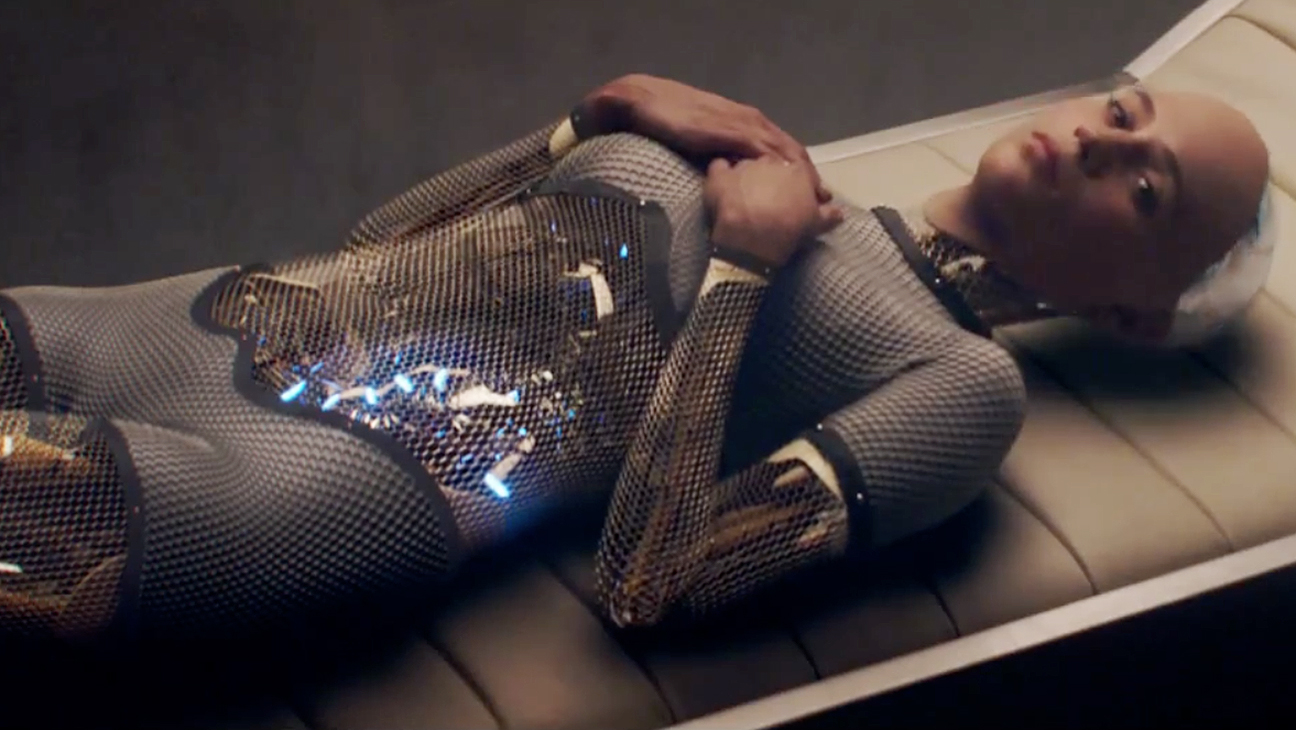 There’s a strange gentleness and a warmth to something as dark and unsettling as Ex Machina. A man sits behind glass and watches as a female robot cautiously enters into the room. She sits down and talks to the man with a curiously inquisitive nature. It’s one of many moments in this little sci-fi picture that feels like a breath of fresh air in its ambiance and script that challenges the viewer more than it does the special effects budget.

The plucky young programmer Caleb (Domhnall Gleeson) is chosen by his search engine company to be one of the few to visit its CEO Nathan (Oscar Isaac). He’s flown out to Nathan’s secluded mansion deep within the jungle and located underground. Once he passes through the security, Nathan’s home is quite cozy and uniquely designed with just enough room for his science lab. It’s a stylish interior, but it becomes apparent to Caleb after spending a few days with Nathan that the isolation has taken its toll. Nathan places words in Caleb’s mouth as if it were a conversation with a biographical ghostwriter.

But Caleb wasn’t just invited out to the secret hideaway for booze and dancing (as Nathan prefers). Believing that he is on the cusp of perfecting the world’s first artificially intelligent robot, Nathan sets up interview sessions with Caleb and the robot Ava (Alicia Vikander). With her flesh face and transparent circuitry, she cautiously enters a room and sits down to talk with Caleb behind glass. Tasked with finding flaws in the creation, Caleb treads lightly through his conversations with Ava. He asks questions that challenge her own originality which in turn makes her question Caleb. But there’s something more sinister to Ava’s conception and her developing thoughts that she only shares with Caleb. And with Nathan being both aloof and a drunk, there’s nowhere safe in this trap of an experiment.

Through its simple premise with a likely conclusion, Ex Machina leaves itself plenty of time to ask the big questions and challenge perceptions. Caleb’s sessions with Ava are intelligent and thought-provoking the way both attempt to probe each other. There are no stupid questions or answers such as “can you love?” and “what is love?” The subject of romance is approached maturely as when Caleb asks where Ava would like to go on a date if she were let loose in society. She remarks that she’d like to visit a traffic intersection to observe the behaviors of passing patrons. Sitting for hours watching people go about their lives is of endless fascination to Ava. Whereas others just see a common presence of a city, Ava spots a playground of psychology.

This is what makes Ex Machina such a brilliant piece of science fiction. It finds the perfect moments of beauty, intelligence and fear in a story of isolated frustration among technological breakthrough. Writer/director Alex Garland is able to both craft and express these ideas with real tone and atmosphere that rewards the viewer who wants more. I’ve seen movies where computer-generated robots smash through glass or crush cars like tin cans. Rarely do I ever see a film so decadent in its special effects and uses them to tell a human story with real character. Only after its slow-burn of unease does the climactic showdown actually have weight and substance. It feels good to finally be writing about a science fiction film like this that doesn’t feel the need to dip its toes too deep into the realm action.

Ex Machina is that infatuating bit of hard science fiction which begs for repeat viewings. It’s smart without being dry and thrilling without being simple. Everything about this film – from design to script – is intelligently crafted with an amazing atmosphere of innocence and tension. This is an exceptional purchase without question. It’s one that I’ll certainly be coming back to again and again, stacked close to my copy of Blade Runner and Dark City.