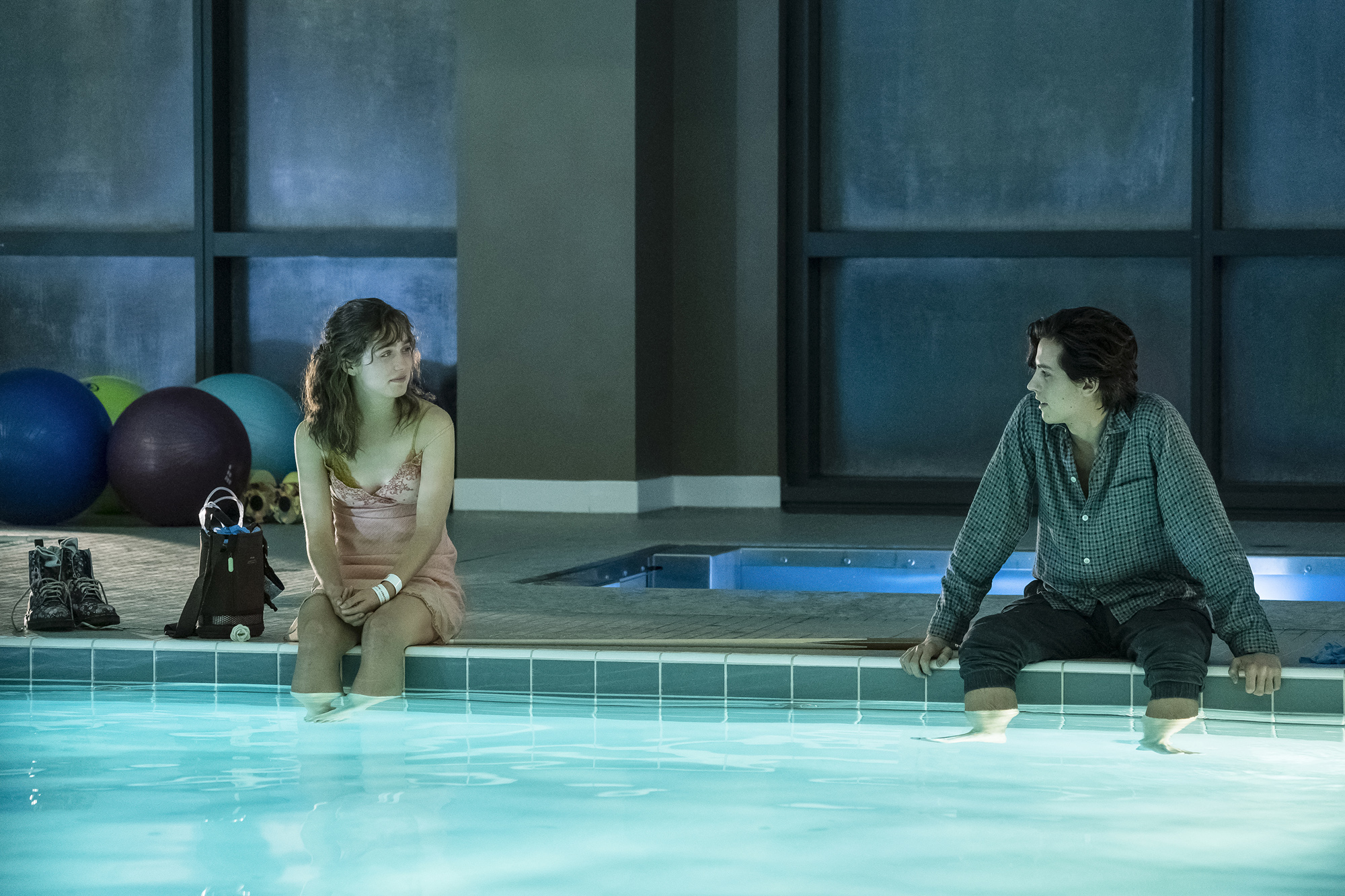 Five Feet Apart is yet another entry into the subgenre of dying teen drama. You know the type; one or more teenagers have a horrible condition or disease that causes great tragedy in finding romance when life seems so short. The film follows a familiar pattern to be sure but the good news is that this tragic romance takes the less myopic route that feels a tad more genuine in its hospital setting, working fairly hard to be a tearjerker.

The two teens in love both have cystic fibrosis, which essentially means they have a whole lot of mucus and a lot less lung. The 17-year-old Stella (Haley Lu Richardson) fills us in on all the specifics when we’re plopped into her stay at the hospital for a clinical trial. Via live streaming, she shares her condition, medication, and treatment devices with a certain glee for having such a short life, knowing full well she is on borrowed time. Having read up on mortality and having experienced tragedy before, she has come to terms with making the most of what little time she has left on this Earth, thankful for being able to share it with another cystic fibrosis of the ward, the charming Poe (Moises Arias).

But Stella finds herself more interest cystic fibrosis patient of Will (Cole Sprouse). She’s initially drawn to this bad boy because he refuses to accept his treatments with his dour outlook on life. As someone with OCD, Stella can’t stand to see someone be so against taking their meds. She wants to knock some sense into him but she can’t quite do that from a medical standpoint. A crucial aspect of cystic fibrosis is that those infected can’t be too close to each other as they’ll risk cross-infection. As such, they’re required to stay six feet apart at all times. This makes the relationships of the three exceptionally difficult when they can’t hug, hold, or kiss each other.

Somewhere around the second act, the film finds an almost therapeutic vibe, where we become so accustomed to the characters and their gentler sides of perceiving their conditions. Will has a wicked sense of humor in his many drawings. Stella has a way with words in her many explanatory videos that come off as entertaining as they are informative. Poe even has a special talent which comes out during a spectacular mini-celebration within the hospital cafeteria. There’s even a warm presence to the usually strict nurse Barb (Kimberly Hebert Gregory).

It doesn’t take a genius to see that all this is inevitably leading up to a tragic end, all the beats arriving on time. But thanks to a lightly sweet script, despite the very clinical dialogue, I found myself with a strange lump in my throat that usually only comes out for more profound films of greater tragedies than this. Taking a look around the theater, I could hear the sniffling and quivering exhales. It’s been a while since I’ve seen a film of this nature be that effective at seducing sobs.

Five Feet Apart never quite elevates itself past its formula, relegating the grander aspects of the two teens coming to terms with life and death in simplistic ramblings on a date. And although their exchange at a pool is charming, separated by a mere pool cue as they speak about the afterlife, it still seems like there should be more. Most of these nitpicks wash away by the third act when the overwhelming emotions finally kick in and the basic repetition of Will’s wooing call of outright stating “I love you” take a backseat to the dramatic vibes. And as far as a date movie that aims to make your date turn your shoulder into a tear-soaked mess, you can’t argue with the effective results.