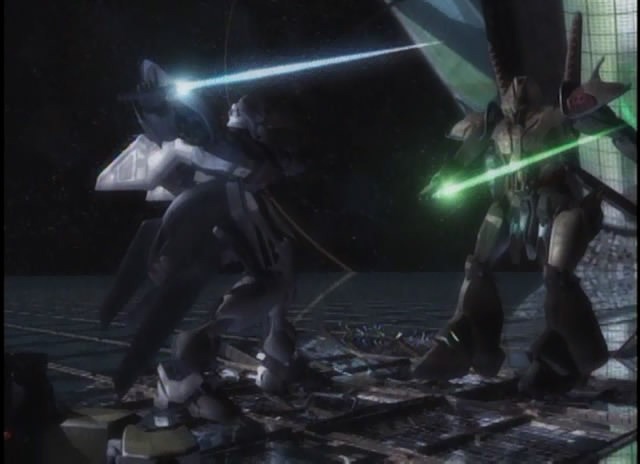 By the time the Gundam franchise had reached its 20th anniversary, Sunrise decided they wanted to do something extra special. Sure, developing an entirely new Gundam TV series (Turn-A Gundam) may have been enough but they wanted to go the extra mile by producing a live-action Gundam TV movie. But rather than being produced in Japan, Sunrise decided to entrust this special to an independent Canadian film studio, Polestar Entertainment. The results, while not worthy of being the centerpiece for Sunrise’s “Gundam Big Bang Project,” are intriguing for both the use of limited computer graphics, the English dialogue that would be dubbed for Japanese, and the clunkiest of budgeted Canadian filmmaking.

The story is built to fit in line with the main Gundam canon of taking place in the Universal Century timeline. Although it seems pointless considering this story exists far in the future with entirely different characters, factions, and giant robots. Even the word Gundam seems to have been lost to time as not one character mentions the title given to the star giant robot hero. I can only guess that the Canadian company was hoping to sell the film as something else in North America as Gundam fandom hadn’t quite taken off in the states during production.

We follow Mark, an ex-pilot who used to work for the Congress of Settlement Nations in charge of a handful of outer-space colonies. Relegating himself to underwater missions to occupy his time, he’s soon brought back to space when he’s commissioned for a new assignment. Congress is having an issue with food shortage and they believe a scientific breakthrough has been made. And so Mark finds himself teaming up with a ragtag group armed with some giant robots to save the galaxy from the tyrannical Congressional space fleet who want to both steal and squash the experiment. To stop them, Mark fights alongside a group opposing the Congress which is called, no joke, the Illuminati. Yes, this is a Gundam movie where Congress fights the Illuminati.

The drama proceeds with all the allure and production values of a Power Rangers episode. Characters spend the entire time talking about the MacGuffin and saving the universe, never given enough personality to make small talk that doesn’t feel like busy work, trying to meet a bare minimum of character. Mark is not a very interesting hero past all his history of once working alongside friends he now views as enemies. He’ll soon meet his rival Jack on the battlefield with a “we meet at last” moment before the mutterings of “goodbye, old friend.” Beyond that, there’s no way to talk about this film without describing it a video game playthrough. Worth noting among the cast, however, was Enuka Okuma, who at the time was also providing the voice of Lady Une in Gundam Wing.

But there is one aspect where this film particularly shines and it happens to be the most crucial aspect. The giant robots on display are utilized quite well. While they may not have the most lavish textures or explosive effects for their gunfire and laser swords, they don’t look too shabby for CGI in a TV movie at the turn of the century. They’re particularly filmed well with the camera, the way we zoom in on certain robots to get an idea of who is piloting what and where they are in the scene. One of the best shots in the entire film features the camera zoom around a colony under attack and shifting perspectives as we zoom in on Mark and Jack in a duel of giant robots on a reflective colony surface, trading attacks of their beam sabers. It’s great stuff, making me wish there were a more profound story to place on top of it.

Looking back on the film, it’s clear why Bandai wasn’t particularly keen on showcasing it for the 20th anniversary. Even during the height of Gundam’s popularity on North American television, the English-produced film was never shown along the likes of Gundam Wing and Mobile Suit Gundam. It was released on home video around this time but I found it rather tough to track down from the retailers that usually carried Gundam videos. While the acting and story is sub-par compared to the loftier and goofier takes on Gundam, G-Saviour served as a prime example of the technology to stage stunning Gundam fights in CGI, even if there wasn’t a more compelling script to use it with.