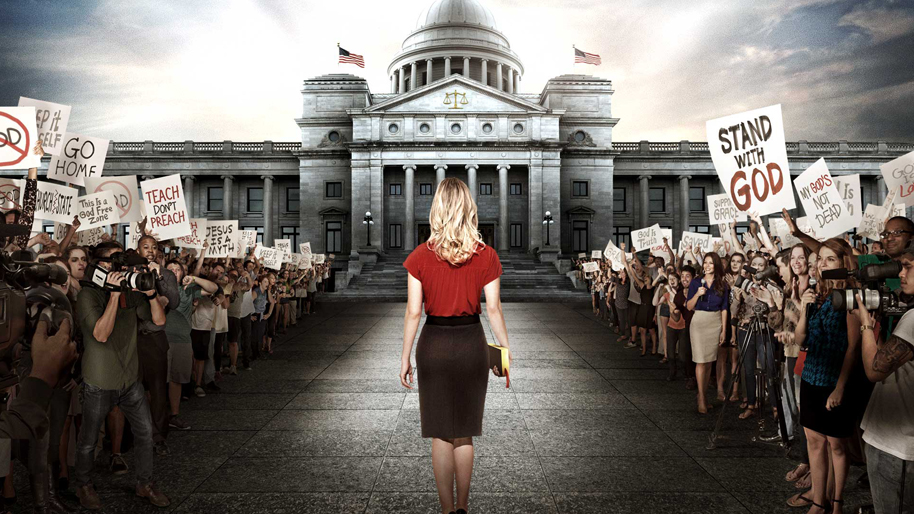 God’s Not Dead 2 is Christploitation at its most laughable levels of trashy hysteria. Similar in premise and themes to its predecessor, this spiritual successor takes aim at the persecution of Christians being allowed to express their faith. No, not the Christians being attacked and slaughtered in the Middle East or the Christians that faced violence from angry terrorists for believing something different. The poor Christian on parade here is an Arkansas schoolteacher on trial for talking briefly about the Bible in a classroom. It is the very definition of first-world problems for Christians and a prime example of propaganda and paranoid nonsense that I’m sure many Christians will cite as their case for mentioning Jesus in public schools. If they can’t talk about the Bible in school, what’s next? Government buildings? The mall? Churches? Somebody save these persecuted Christians before they’re forced to renounce their faith!

To make such a scenario more dramatic and riveting than it really is, the movie does its best to present good-natured Christian protagonists and misguided atheist villains. Grace (Melissa Joan Hart) is a high school history teacher that is portrayed as a sweet and innocent woman who cares for her ill father as any good Christian would. She finds herself quoting scripture in the classroom when a student asks of the correlation between Martin Luther King, Jr. and Jesus Christ. Such talk stirs up the “free thinker” parents that are appalled by Christianity in a public school. The administration wants Grace to apologize, but she refuses and the trial is on for the right to talk about Jesus in school, gaining enough traction to become national news.

Representing the prosecution is an ACLU attorney played by Ray Wise, a fitting bit of casting considering he once played the devil on TV’s Reaper. Playing such a sinister character, Wise has the honor of reading the line “We will prove, without a shadow of a doubt, that God is dead” with that wicked smile he does so well. The movie does improve slightly over the previous movie where the central antagonist of a college professor that challenges Christianity is actually a closeted Christian himself. The ACLU attorney is fully committed to being the evil atheist that will destroy God, one courtroom case at a time.

Representing the defense is the good looking Jesse Metcalfe, but, wait, he’s an agnostic! Think of him more or less as the straight man in this rather strange tale of the crisis of Middle Americans. He doesn’t so much want to make a case for Christ in the classroom as much as he wants to prove that Grace wasn’t malicious or preachy in her citing of scripture. There’s a twinge of hope for this court case when he states that he will not be putting Christianity on trial, but this is of course a lie. This is made abundantly clear when J. Warner Wallace, writer of the forensically based religious book Cold Case Christ, is called to the stand. To be fair, Wallace does have some interesting things to say about Christ in his findings, but it feels out of place for this movie. It is a little hilarious to believe that Christians could call upon Wallace for any case where someone cites Christ in the class or quotes scripture in a government building.

Also similar to the previous film is the subplots of Christian-themed stories that surround the case. A Chinese student quarrels with his dad about being a Christian, fulfilling some sort of diversity quota for these films as if to say “see, [insert non-white race] can be Christians, too.” I’m assuming the movie inserted this subplot in order to excuse a rather cringe-worthy scene where a white guy has to teach the black school principal about Martin Luther King. Other subplots include a reporter recovering from cancer and unsure of her devotion to Jesus. A little Christian rock music from a promoted Christian band does the trick. The most recognizable of returning characters is David A.R. White as Pastor Dave, a man that seems likable and silly for his many slapstick antics, but still views the central case as a war on faith. He views this event as a time to finally get serious and stop spilling his damn coffee with amusing results.

Director Harold Cronk has staged his clunky and choir-playing drama to be both a fear-mongering tale for Middle American Christians and a proclamation of faith fit for mom’s Facebook feed, urging others to Like if you believe God is not dead. It is a film built for rural Christians of quaint communities to feel as though there is urgency, a danger and a war that threatens everything about their faith. And I really don’t want to look down on movies about religion, but it’s hard not to with a franchise that props up Duck Dynasty as God’s must-watch TV.