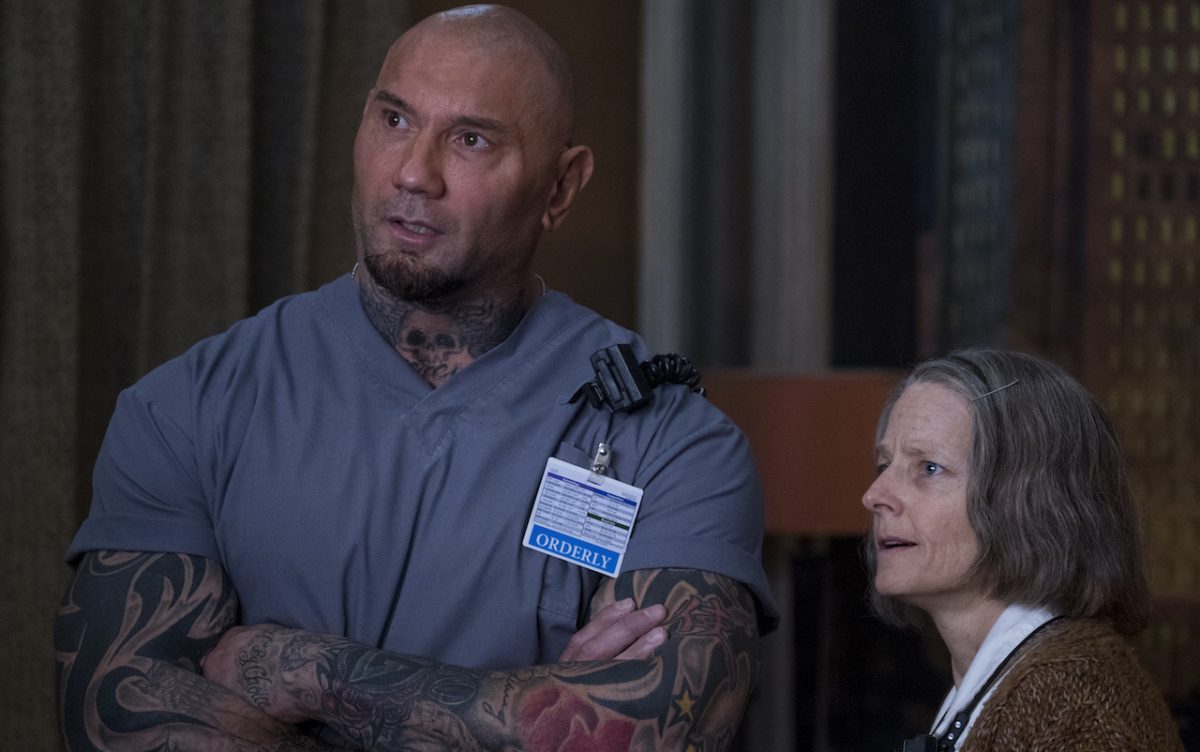 Hotel Artemis depicts an eerily believable future of water conglomerates, dwindling resources, and uncontrollable riots that it’s a very plausible vision of Los Angeles in 2028. But this isn’t about finding a solution to the water shortage or toppling the empire that hordes. Those are far too lofty ambitions for the wealthy residents of the Hotel Artemis, where criminals come for the best healthcare, no questions asked. There are far too many chaotic characters of deception, guilt, and violence stirring inside to be bothered with the outside world. Any more arcs and this unique sci-fi action picture would overdose.

What ultimately keeps the story stitched together is the strong performances of a remarkable cast. Jodie Foster plays Nurse Thomas and not only the central figure of maintaining the Hotel Artemis but the most entertaining of characters to lead the film. A lesser film would have turned her into a pitstop, to be left behind or gunned down in the second act. Such reduction would be criminal of such a complex and chipper character that eats the scenery. Her thick accent and knowing jabs have all the appeal of that one nurse you’d be glad to have, taking surgery in stride and facing down gangsters with a smirk. She runs a tight ship and has a memorable presence with her hobbling down halls in her comfy uniform and vigilant surveillance of her patients over her security/medical tablet.

Her Wednesday night is proving to be the busiest, on the eve of Los Angeles biggest riot of guns and rocket launchers. She is already caring for a sleek seductress of an assassin played by a stunning Sofia Boutella and a hot-head executive played by screeching Charlie Day. Now she must deal with her returning customer played by Sterling K. Brown, hauling in his shot-up brother after a botched robbery. Her highest client of a mob boss (Jeff Goldblum) will also be dropping by with his trigger-happy son (Zachery Quinto). And there are more guests as well, making the many tasks of the muscular medical assistant Everest (Dave Bautista) that much tougher with lights going out and mobsters banging at their door.

Foster keeps insisting it’s just another Wednesday at the Hotel Artemis, even if buildings are exploding and people are being shot just outside. If only it were just another night and the film didn’t spiral into a twister of various arcs that stumble over one another. Brown just wants to escape with his brother maybe have a fling with Boutella. Boutella, however, would rather fulfill her kill contract of a target inside the Artemis. Brown’s brother has accidentally stolen a fortune of a MacGuffin from Goldblum which would be reason enough for Goldblum to lay waste to the Artemis. But even he has other motives for his visit. While some of these driving arcs connect, they have all the grace of bumper cars slamming into each other. This makes it particularly difficult to buy the shifting of allegiances which seem to be almost random as the story circles its climax.

Most if not all of these shortfalls can be overlooked for the adrenaline shot of an all-star cast with pique performances. A slick script that narrowly weaves around most cliche lines gives the actors plenty of scenes to naturally ease into their roles. Brown has as much serious grit leading a robbery as he does casually drinking with the alluring Boutella. Day makes for the perfect villain that doesn’t know how to control his ego, volume, and fists. Bautista is always a treat as a teddy bear of an aggressor in proper medical attire for bedside manner with sleeves short enough to chokehold aggressors. It’s a little disheartening to report that Goldblum is as prominent a villain, but he still makes the best of his small scenes, enjoying every wonderfully quirky line he’s given.

For taking place in the future, there’s some sci-fi dressing but light enough without being fattening on visuals. Yes, there are plenty of holograms and voice-activated systems, but they never crowd out the rusty and old-fashioned decor of the Artemis. It’s the little features of laser-powered scalpels and 3D-printers for organ transplants that add to the film’s color without succumbing to Jestons syndrome.

Topped with striking fight scenes and a sumptuous synth score by Cliff Martinez, Hotel Artemis has a pulse as pounding as the most rip-roaring of action bonanzas, even when it flails with freneticism. With the exception of a suspiciously reworked conclusion, including an entirely pointless closing shot that appears as though it’s from another movie, it’s bloody fun with its crossing of genres and stirring of an atmosphere. And as we enter into a movie summer of PG-13 tentpoles, it’s a real treat to see something this original, slick, witty, and savagely violent. Where else can you see a film with death by 3D printer?