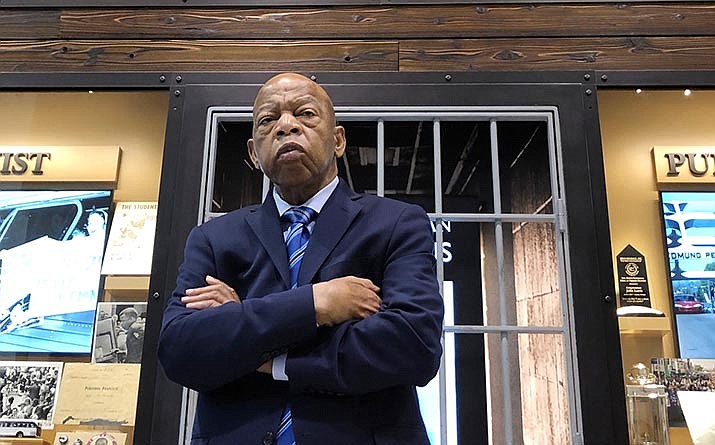 I’m not gonna lie. It’s exceptionally sad to look back on the documentary about John Lewis so soon after his death. No sooner had I finished the film and started thinking more about the racial divide in America’s chaotic landscape did I hear the unfortunate news of his passing. Yet it makes me appreciate this picture all the more. My initial thoughts were that the film was less explorative of John Lewis as a person, more focused on his civil rights activism which is important but still incredibly well documented prior. However, his passing makes this documentary all the more crucial, considering how some people have never heard of him and how some senators apparently confuse him for other black men.

This confusion I found perplexing. How could anyone not take note of John Lewis? He is perhaps one of the loudest voices for racial civil rights since the 1960s movement, of which he played a crucial role at such a young age. Lewis was in his 20s during the time Martin Luther King was delivering speeches in his 30s. It’s an astounding era to look back on and Lewis does so within this film, taking his place on a soundstage to watch a big screen of archival footage he had never seen before. Watch his face while he watches. It’s quiet and contemplative. He’s not nostalgic because, as he states at the beginning of the film, the fight isn’t over.

The parts of the film that are not archival or talking heads are four years of footage with Lewis touring the country to give talks. He speaks loud and proud about one should not despair during an era when racism is on the rise and civil rights are deeply threatened. Lewis was in no mood to try to downplay the danger. He could see all the warning signs with elected President Donald Trump signaling a rise in a traditionalism that threatened all the progress that had been made. Trump’s campaign slogan of Make America Great Again set off alarms for Lewis. He remembers what America used to be. It was far from great.

Lewis is always on the clock. We follow him to his home where he gets up and read the paper, hardly uttering a word. He’s zoned in on the news and only stops to remark that his nightmares are reading that everything he had worked for was destroyed. He’s present during election night where he is seen walking through hallways to talk with people, check his phone for election results, and provide calculated commentary on watching the election. He’s rooting for the Democrats because he’s aware the Republicans are actively working to dismantle civil rights for people of color. This turned out to be true as with voters being deeply tampered with, to the point where even the Supreme Court agreed this was wrong. He’s not willing to work with Donald Trump considering the President slandered him, stating that Lewis had done nothing for his community. This has been disproven via Politifact but it doesn’t matter to Trump. It’s clearly a tactic to discredit Lewis for being mean to him. Lewis doesn’t care. There are more important issues than bootlicking the President when the rights of African Americans are at stake.

Good Trouble is more about the issues than the person which has its merits for keeping the film focused on Lewis’s goals but doesn’t reveal too much about the man himself. A possibility is that Lewis just isn’t all that interesting a guy when not in front of the microphone or working within congress to do what’s right. Some interviews highlight this while others merely congratulate him for all the work he has done. It’s bittersweet that the way the film is framed prior to Lewis’s death makes it seem like flowery montage to be played at his funeral. As a tribute on that level, it’s a strong film for communicating what Lewis was all about.

In one of the most notable speeches he gives, Lewis mentions he has been arrested several times. As an active representative in government, he has also been arrested. He predicts that he’ll be arrested again. To someone taking him out of context, this would seem anarchistic, but Lewis clarifies this was the good kind of trouble to get into. It’s the trouble that gets written about in history with the march in Selma or the bus incident with Rosa Parks. It’s easy to look back on those events as moving moments when they’re so ingrained in our culture, history, and education. But will we recognize such defiance now or treat it as being different from that of past discrimination? History will tell us for sure but Lewis recommends we don’t wait for such trouble to be labeled good if rights are eroding.