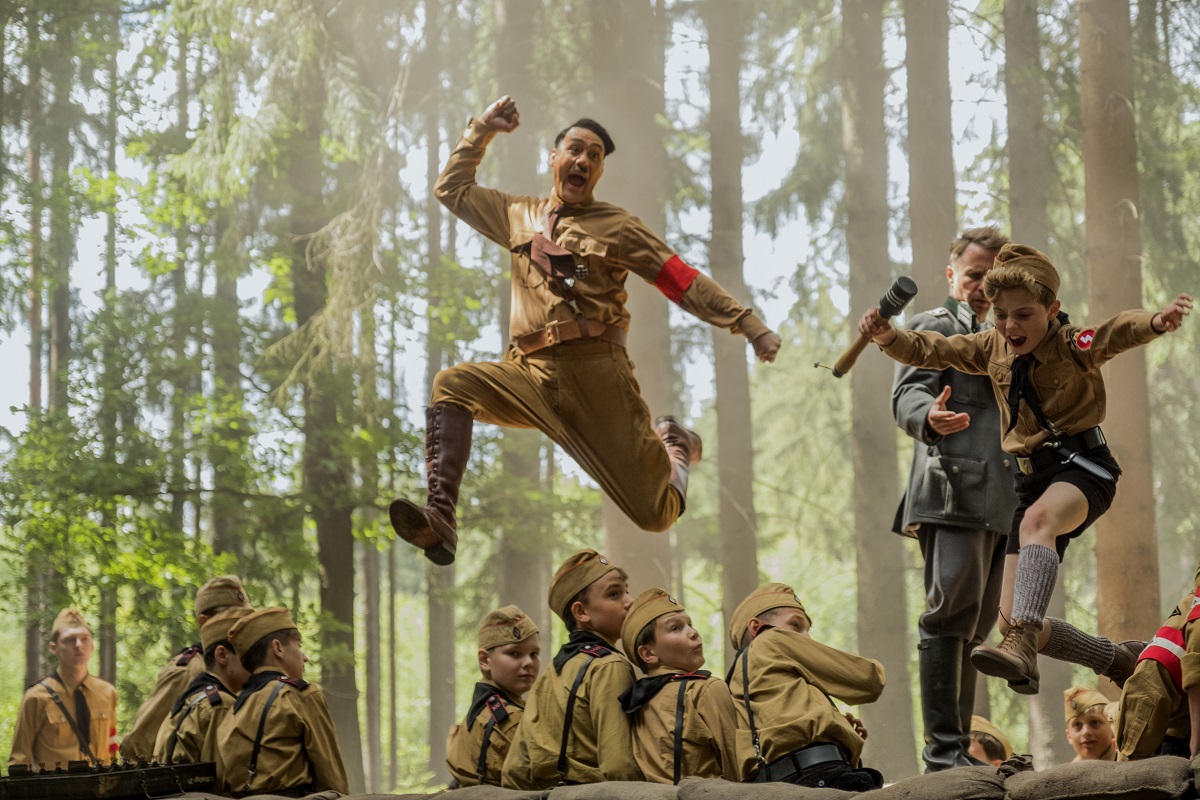 Compared to the more aggressive and astute Nazi satire of Look Who’s Back, Jojo Rabbit is a stroll through easy comedy. The German Nazis during the last days of the war are portrayed as easy cartoonish figures easy enough to laugh at for being so wrong. Jokes about burning literature and stirring up demonic rumors of Jews is pretty par for the course in a film that never finds much more to savage. Thankfully, there’s a shift to the more sincere in a comedy that has a bigger heart for love than a knife for Nazis.

There’s at least a grounding between the heartfelt and the hilarity within the earnest Jojo (Roman Griffin Davis), a 1o-year-old aspiring to be the best Nazi he can be, even if the party’s reign is nearing its end. Overwhelmed by the tasks ahead of him, he seeks comfort in his own imaginary Hilter pal, perfectly played as a goof by Taika Waititi. Even for being an imaginary friend, all of Hitler’s fascist ideals and bad ideas are present within Jojo’s imagination. They have a funny dynamic but, let’s be honest, there’s only so much that can be done with such a concept.

The good news is that this is not all the film has to offer. We see that Jojo has a comforting home life with his mother, Rosie (Scarlett Johansson). While dad is off to war, Rosie tries to keep politics out of their discussions, especially since she holds such distaste for the Nazi party. Keeping that hatred at bay, she keeps up his spirits with chipper dancing and bike rides to let her son know life is not all about war and killing Jews. That being said, she doesn’t want Jojo to be aloof to the horrors of war. They pass by a place in town where people are hung for conspiring against the Nazis and Rosie makes sure he looks at them. He asks what they did to be hung. “What they had to,” she answered honestly.

Though Jojo’s mother tries hard, he’s still not convinced the Nazis are such bad guys. Moms just never that cool. Instead, he’ll learn the more engaging way when he discovers the Jewish girl, Elsa (Thomasin McKenzie), living in his walls. He has never seen a Jewish girl before and wonders why not all of the rumors are true. She’s also stronger than him. How could this be, he wonders. He must know more. Maybe he can learn more about what makes Jews tick. Maybe even love one.

The film walks a fine line between goofing on the Nazis and a coming-of-age friendship that is adorable. Not all of it gels very well at first. It’s clear that the heart is heavier in this picture than the mere gags of “I heard Jews do such and such.” Another intriguing aspect that ties all this better together in the second half is the premise of how imaginations can set us free. Those that think a little bolder when life seems to be tougher end up being the better people who narrowly make it out of the Nazi party or at least do the right thing before meeting ends. Captain Klenzendorf (Sam Rockwell) slowly embodies this trait, taking more interest in what he’ll wear into battle than what he thinks of the Jews as targets. Those with limited views, as with the gossip slinging Fräulein Rahm (Rebel Wilson) will most likely face a demise fitting of an unquestioning zealot. Imagination allows us to question and reshape the world. How we choose to do that is key. And while Jojo’s imagination conjures Hitler as a playful type, it can also paint him as a monster meant to be defeated.

How much the heartfelt comes through in Jojo Rabbit is debatable considering it walks a tightrope of irreverence for most of the picture. The satire is at least one point enough to digest properly and the threat strong enough to showcase there are real stakes to war than mere playful darkness to such a historic war. At the very least, it’s satisfying to watch a kid say “Fuck off, Hitler” right before kicking him out a window. A simple joy of from a film that could have been a little bit more.