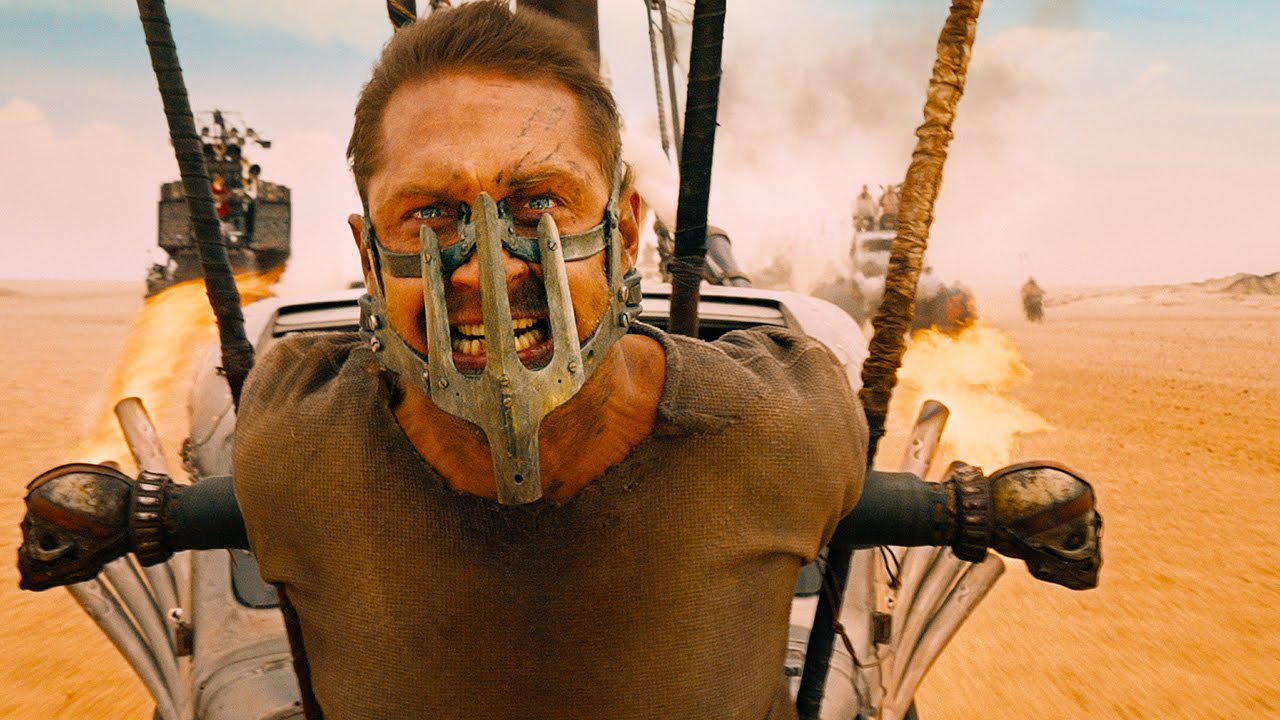 The only negative criticism I’ve heard for Mad Max: Fury Road was from one grumpy old man. After he left the screening, he remarked that the movie was nothing more than a long car chase with no story. So I guess if you don’t like car chases and differentiate them from the actual plot, Fury Road just isn’t for you. For everyone else, it’s a blast of post-apocalyptic action like no other.

Even though there hasn’t been a Mad Max sequel in 30 years, the world conceived by George Miller is easy to read and become engrossed within. Enough time has passed since the fall of civilizations that a strange culture of society has been built up within the wastelands. The empirical Immortan Joe – an aged beast decorated in revealing body armor and a fearsome breathing apparatus – rules over his land and people with bountiful resources. So organized he has become that there are now entire towns devoted to the development of gas and bullets. There is no lengthy introduction given to the full-scale of his operations or the white-skinned warriors that serve him. The movie simply drops us into this land of slaves, ridiculously cool cars and glory-obsessed madmen to let our eyes take in the specifics and not entirely our ears.

Our title protagonist (Tom Hardy) is played straight as the stranger who comes to town – acting as both a vessel for the story and the audience to Joe’s world. Though Max narrates the opening, he avoids divulging his past which is slowly pieced together throughout the picture. He may, in fact, have the least amount of dialogue – resigning himself to grunts and simple phrases. His actions speak far louder than any words in how he is able to dispatch foes with smarts and grit. So when he runs across the tough-as-nails Furiosa (Charlize Theron) – a female warrior of Joe turned freedom fighter for his slave wives – he doesn’t hesitate or undermine such a determined woman. We know they’ll work together, but only in the sense that any two strangers would trust one another in the wild west of cars and guns.  It isn’t enough that Furiosa agree to free Max from his chains and drive him to safety – Max still keeps a close eye on her and disarms every weapon she has in her rig. Which, given the abundance of firearms and Furiosa’s skills, is not just a paranoid trait.

It’s the little details that make Fury Road far more than just your usual post-apocalyptic picture. Immortan Joe assembles a collective of white-skinned soldiers known as the War Boys who live to die and worship at the alter of steering wheels. Through the conflicted and ill Nux (Nicholas Holt), we learn about the ins and outs of their culture from the pleasures of being witnessed by Joe to their kamikaze signature of dousing their lips in chrome spray paint. There’s a cleverness to all the craziness on the screen the way Max is used by the society as a blood donor. Can’t store blood in extreme heat? Just take the donor with you. Driving a car? Strap him to the hood. There’s also small elements of the world that are peered at for a moment, leaving the audience to ponder. Max and his crew cross a swampy marsh of men who walk on stilts and eat crows. It’s only seen for two shots, but they’re unforgettable ones that make you all the more intrigued and interested about this strange, strange world.

Perhaps it’s the abundance of classical music cues, but there’s a grace in assembly of the continuous chase as if it were a ballet. A bard accompanies the convoy on his moving stage built for him to play his flame-throwing guitar. Daring warriors bend and lunge toward vehicles with flexible poles that swing them back and forth. Characters crawl along, on top of and below vehicles all at the same time. It’s all just a brilliantly shot sequence of action that holds both a beauty in its choreography and an intensity in its grit. The film lover in me enjoys the tactful means of storytelling via amazing cinematography, while the campy action geek in me is gushing over monster trucks fused with muscle cars.

There’s a little something for everyone in Mad Max: Fury Road to make it one of the best action pictures of 2015. It managed to reduced the usually collected film critic Mark Kermode to describing the wonders of the picture by mimicking the sounds roaring engines. I can’t exactly blame him for being so thrilled with a movie so giddy with action, visual with its storytelling, intense with its violence and engaging with characters. It’s that rare breed of action picture that reduces the most jaded critics of the medium to pumping their fists as they nearly topple off the edge of their seats. The whole is just a joyous bit of film making or, as Kermode would put it, an extreme dose of the “vrrrrrrroooommmmmmmmm!”