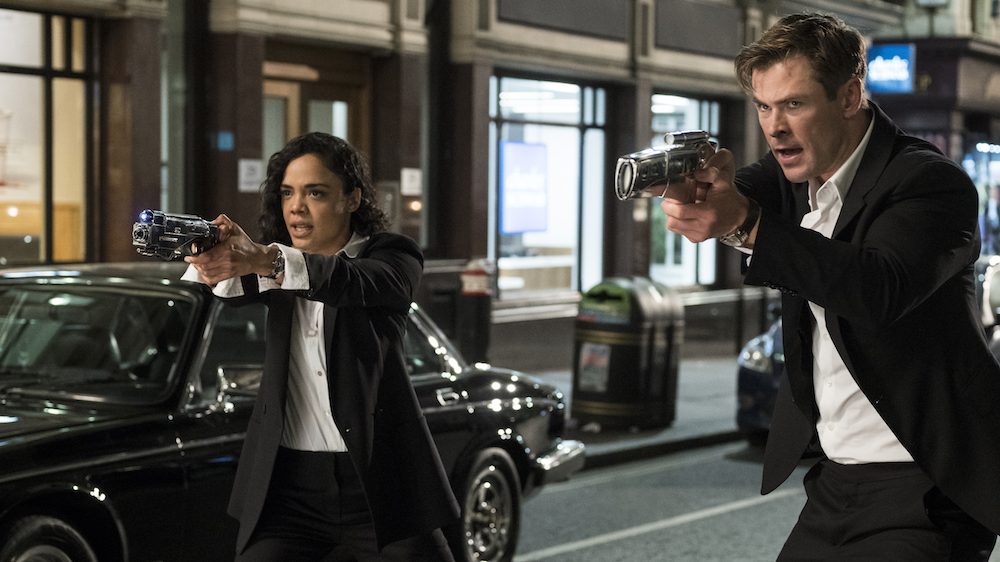 Sony once more mistakes the tech for the talent of remaking its familiar properties. Men in Black: International has all the decadence of numerous alien creatures, intergalactic technology, and plenty of well-dressed agents trying to keep the secret space alien populace in the shadows. But there’s not much of that brilliant character chemistry that made the original 1997 film such a goofy treat of a sci-fi buddy picture. In its place is lots of artificial padding where characters spend more time talking about planet-destroying guns and how good they look in suits than anything else.

Tessa Thompson plays a science prodigy who has devoted her whole life to tracking down alien life. Ever since she caught a glimpse of the secretive Men in Black organization as a child, she’s become inspired to prove herself as an agent. Since there’s no application, she has to do some detective work and stumble into the organization. And she picks up on things extremely quickly, where after what seems like a day she’s all caught up on the various alien species. The MIB must’ve let a lot of info slip through the cracks, considering agents failed to neuralize her as a child after witnessing an alien in her bedroom.

For her first assignment, she’s sent off to the London branch of the organization where she’ll work alongside the brash Chris Hemsworth, putting on a Captain Kirk demeanor for handling alien gangs and invasions. Much like Tessa, he won’t change much; he’ll start off as a lovable dope of a hunk and remain little more than eye-candy throughout. We’re introduced to him as a suave seducer that in order to ensure the script won’t pair him up with Tessa, the dialogue goes out of its way to play the chemistry safe and timid, despite their initial meeting being a cliche of slow-motion window shopping.

While I’m not against Thompson and Hemsworth remaining just friends as workplace partners, they could really use some more personality past the bare-bones personalities they’re dealt. This is mostly due to their mission being one so familiar and tiresome I’m surprised they didn’t poke fun at all the familiar elements. There’s a secret invasion of spooky looking aliens of a unique energy searching for a big weapon that can blow up planets. There’s also the intriguing aspect of a mole within the organization. I found it strange how Hemsworth character appears in a painting with his senior partner (Liam Neeson) placed right alongside an illustration of the events in the first film and don’t make any correlations.

The biggest problem with a film such as this is that there’s no real audience surrogate for this type of fantastical story. Part of the appeal of Will Smith’s original character was that he always questioned how strange and backward everything seemed to appear within the Men in Black. Thompson barely questions the system at all, even when something is rotten in their clinical environment. But it’s not just the organization she goes along with; the bland script does her no justice and she never steps out of her zone, forced to say such old one-liners as “check please.” Hemsworth also becomes a victim of the dreary one-liners, spouting “Okay, now I’m pissed off.”

Sure, the visual effects are predictably pretty, including the pint-sized pal of a comical alien voiced by Kumail Nanjiani, but they mostly just do their job in the background, again, without question. This aspect, unfortunately, makes Kumail’s character the most charismatic of the dreary ensemble and his only job is to comment on the action. There’s a very impersonal edge to the film where characters rarely talk about themselves and more about things. You won’t hear Thompson open up about her childhood or desiring a place she belongs, but you will hear her talk an awful lot about how cool she looks in a suit (which, to be fair, she does). Hemsworth seems far more interested in shooting off a giant mystery gun in the desert than questioning anything else about it or its connection to MiB. He and Thompson just sort of fire off the gun and create a big hole in the Earth because I guess that just needs to happen. Don’t question it; just step back and let the VFX do their stuff.

Men in Black: International has such a stuffy nature to its sci-fi adventure it seems far more like a boring Monday at the office than a daring mission to save the planet. Perhaps there was a confusion that Men in Black was such a fantastic franchise because of the visual effects and sci-fi spy thriller aspect alone. It was fun to watch Will Smith and Tommy Lee Jones trade funny blows with their imposing personalities while they stopped the menace of alien forces, far from the boredom of making sure Tessa Thompson and Chris Hemsworth stay firmly in their lanes of roles mired in trailer talk. This is the most tired of retreads I’ve seen in recent memory, so unfathomably dull that I won’t need a mind neuralyzer to forget this picture.

One thought on ““Men in Black: International” Review”