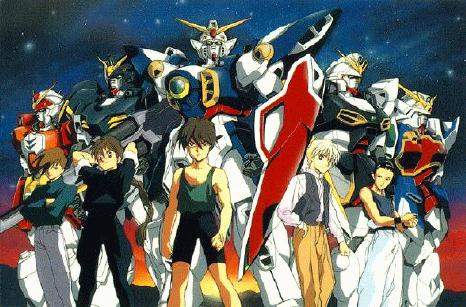 There was a time when I considered Mobile Suit Gundam Wing one of the most thoughtful, mature, and entertaining anime series out there. To know why you must understand the era. Wing was the first Gundam TV series to hit US television in 2000. It aired in an afternoon time slot on Cartoon Network. An anime about giant robots that dealt with politics, psychology, and the nature of war was so uncommon to see on afternoon television that I naturally gravitated towards the show. It’s only when pulled back from the weekday airings of my youth that I finally understand how deeply flawed this show was in nearly every aspect. Some anime was just better when you were a kid.

As a spin-off of the Gundam brand, Gundam Wing takes place in an alternate universe but with the familiar settings of the franchise. There is a long-standing war between the people of Earth and the people of the humanmade space colonies. In retaliation, five colonies each send five Gundam robots to Earth. Their mission to dismantle Earth’s military is meant to be a secret but how secretive can you be with giant robots that look nothing like the other giant robots? It’s not exactly a secret when one of the Gundams strolls through an open military base with no cover, during the day, painted the brightest colors, and wielding a massive machine gun.

What I suppose is the big secret is that the pilots are unassuming teenagers, all of them given numbers as names. Heero Yuy, favoring tight shorts and a tank top, is the cold and emotionless killer, having done away with feelings for the mission at hand. He’s such an unfeeling person that when the prim high school girl Relena invites him to her birthday party, he rips up her invitation and tells her openly that he’ll kill her. Of course, she finds him too alluring and persists in following Heero, leading to him not killing her off because of some strange sensation in his heart. Could it be love?

Other pilots include Duo Maxwell, the long-braided eccentric boy of the group, far too chipper to be piloting a grim reaper style Gundam known as Deathscythe. He’s still boring but at least seems to have a better outlook on life. Trowa Barton is vying to be the more depressive and suicidal of the group, edged out slightly by Heero. It must drive him so mad that he’s grown his hair out to such an extreme length that would make even the most hardcore of goths envious. Quatre Winner is the weakest of the pack, trying to be a pacifist while still slaughtering his enemies. He’s the timidest and whiny of the group that when he finally loses his mind and goes on a killing spree, it still feels like too little too late. Finally, there’s Chang Wu-Fei, the Chinese warrior pilot that lives only to fight and find the best opponents. Oh, and he really stresses how women are weak, which in this universe equates to flirting, as Wu-Fei attracts the stern and smitten Lt. Noin.

The characters are only minimally developed over the first few episodes as the rest of the story makes way for the overly dense and full-of-itself plot of shifting political powers and trading of Gundams. One faction leads a bloody coup, only for another to move in a few episodes later. Blandly designed political players will enter the story and leave almost as promptly as they came, usually being caught in an explosion. The prettier ones are given more depth, though their aloofness in allegiance doesn’t make them nearly as exciting as the show would want us to believe.

Zechs, brandishing a helmet similar to that of Char from Mobile Suit Gundam, is only keen to work for whichever side he feels will benefit him and his muddy lineage. Treize is a royally dressed political figure that rambles with philosophy, favoring the faction he believes will make him more powerful. Lady Une is straight out of a soap opera playbook, finding herself overwhelmed with a split personality in handling matters of war and peace. She’ll go with any faction that can apparently tolerate her weirdness, despite being far too emotional and unstable to be a key political or military figure.

There are some unique story elements present if you can fish them out from the inane dialogue and dirty animation. A faction known as The Romefeller Foundation begins a campaign for programming unmanned giant robots that will fight battles for them. This opens up a massive can of worms for a Gundam series, but it’s mostly shut down for so-called deep reflections on human nature and because the show needs more stuff to blow up. Bigger plot elements are reduced to cliches, as with the Zero System that is described as a piloting software that can turn the pilot into a bloodthirsty warrior and can apparently allow the pilot to peer into the future. The system is mostly a nihilism machine, propped up as an excuse to make the mostly emotionless pilots utterly vapid of personality.

Further promoting the soap opera idea are the fake character deaths. Nearly every Gundam pilot has a moment where we think it’s the end of the line for them. Heero detonates his Gundam while inside the cockpit, flying out of the exploding robot, and lying on the rough ground with blood pooling out the back of his head. He’s fine by the next episode. Trowa is caught up in an exploding robot as well. He returns a few episodes later with amnesia. Other characters will also “die” and come back later as if it’s some shocking revelation, despite being so common.

Some characters don’t come back. A good tell is how beautifully designed the character looks. The lovely Hilde, a soldier for hire that has a crush on Duo, won’t suffer a horrific demise. The big-nosed Gundam scientist is dead meat. The only wild card is the sinister political lapdog of Dorothy, brandishing absurdly long eyebrows with her beautifully wicked face. Will she perish or not? Who cares; her eyebrows are too ridiculous to care about anything else with her character.

The biggest problem is that Gundam Wing takes itself far too seriously for what is mostly a pretty boy show. The dialogue is so ludicrous that I’m surprised the English adaptation team didn’t take liberties to salvage the material. When the Gundam pilots are first introduced, they make their names and personalities known as though they’re filming a personal ad. Sometimes the animation director struggles to place exciting stuff on top of padded out narration. To demonstrate his philosophy of human nature, Treize is seen preventing a mother from rushing to her infant child that is about to fall off a dock and drown. How deep and not even remotely weird behavior for a political figure that wouldn’t generate a scandal.
As the themes grow grander, the script gets goofier, babbling on about humanity’s place among the stars. In some David Lynch-style move, there’s an unexplained golden aura of Heero that Quatre believes to be the heart of outer space, only popping up for one or two scenes. Maybe this is what was really inside that briefcase in Pulp Fiction? And I was floored when I discovered that halfway through the show there was a two-part clip show with characters providing even more pretentious narration over already pretentious scenes.

Despite all this, Gundam Wing still generated a massive following. It was one of the first anime series to be broadcast on Cartoon Network in an uncut format. The action-oriented animation block of Toonami sought to place an anime on their new late-night slot and wanted something more adult. For the American broadcast, the US distributor, Bandai Entertainment, adhered to instructions to not edit the content and add in a few swears suitable for a TV-PG rating. At the last minute, however, Toonami decided against cutting off their afternoon audience and commissioned Bandai to quickly assemble a TV-Y7 cut that could air in the afternoons without a major fuss. The edited dub was rushed out at the last minute and contains odd dips in audio quality for replacing “kill” with “destroy” and “God” with “perfection.” Such a presentation made the uncut form shown later at night seem all the more appealing.

I consider Mobile Suit Gundam Wing to be one of the weakest of Gundam series, yet it remains one of the more popular for its heavy focus on the pretty boy and mecha dynamic. It was such a hit that a 3-episode sequel series, Endless Waltz, would be commissioned. The video series brought the story of the Wing universe to a corny close, complete with more bizarre plot twists and a super-silly pathos that ends with Heero holding a dead puppy and a flower. Endless Waltz was also successful enough to warrant an edited movie version of the 3-part miniseries with additional scenes and characters added to the plot. Most notable is the inclusion of Dorothy so that we can bask in her goofy elongated eyebrows once more.

Gundam Wing is an anime more admirable for its legacy than its actual content. I’ll give it credit for opening the door to an American audience to explore Gundam’s stronger titles in the franchise but can’t afford it more praise past its warm nostalgic feel of watching it weekday afternoons after school. When the dirty and stiff animation isn’t struggling to stage battles with spherical explosions and action lines, it’s panning across long and drawn out exposition of characters monologuing endlessly. While most of these passages are boring, I did get one big laugh when Heero’s pessimistic view on humanity’s desire to expand is cut off by a teacher, stressing that this was inappropriate material for an introduction speech.

The only aspect of the show I will admit to being stellar is the soundtrack by Kow Otani. His score, utilizing everything from guitars to atmospheric synth, to a full orchestra, is a pleasure for the ears and did a stellar job trying to set the tone for a space opera. The music is so well-made that even Cartoon Network’s Toonami block remixed one of the tracks for their custom openings for the show. If you close your eyes while listening to the score, you can imagine a better anime suited for such beautiful tracks. In tribute, I feel as though the DVDs should come with an isolated music-only track. The anime would still be left with overly long pans and cheap animation, but at least we could enjoy in its design without the endless conversations of egotistical characters, with heads so far up their butts it’s no wonder this anime inspired so much erotic fan fiction. At least those fan-written stories had more romantic tension with gay sex.