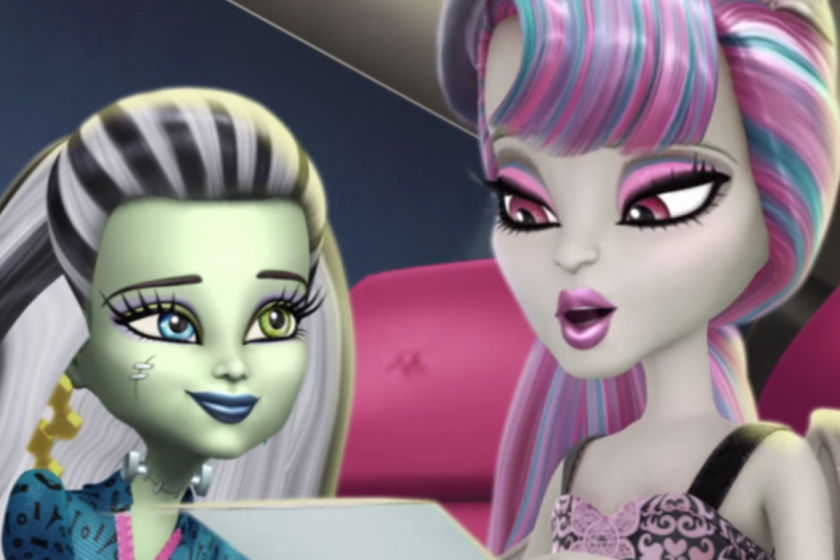 Once more I venture into the limitless void of the TV movie franchise Monster High. Intended as little more than a commercial for the brand of monster themed dolls, I desperately search for something to latch onto from the perspective of an adult male. I’m not picky – a clever use of dialogue, some decent character development, good looking animation or even just one small gag that makes me chuckle. I don’t walk into this endless array of Monster High movies expecting the worst every time. I genuinely pop in each disc hoping that this will be the one – this will be the movie where I finally see that hidden power of Monster High outside its marketing angle. Sadly, this is not that movie.

But let’s be fair. This is not the worst Monster High movie I’ve seen. The story at least has a decent angle. One lucky student specializing in fashion, Clawdeen Wolf (trademarked), receives the chance of a lifetime to travel to Scaris, France and compete for an apprenticeship with a top designer, Madame Ghostier (trademarked). That’s not a half-bad idea considering it’s within the wheelhouse of the franchise and the characters. The whole Devil Wears Prada plot allows for some unique characters added into the mix as well including a skeleton girl with a painted skull. No devil designer present though which could have made for some better jokes. It’s a genuine surprise from a series where all the characters look virtually identical and rely entirely on references and bad puns for comedy.

And, oh, how I wish there was something more to enjoy. The flat characters of simple phrases and traits seriously hamper the story that aims to include as many monsters as possible. Very little of Scaris takes advantage of the French location and theme outside of the cartoonish stereotypes. Then again, there isn’t much to showcase from the TV-budgeted animation of the stretchy CGI animation. The movie could at least take advantage of the monster angle which it almost always fails to capitalize on.

There’s one gag that manages to be effective as the girls remark on the skeletons in the catacombs. Turns out they’re just taking naps and shush anybody who wakes them. It’s a decent joke, but how does that explain an underground prison cell where it implies the last person wasted away to a skeleton? Does that imply that they still live on as a skeleton? Or can they become more accepted if they wear clothes and paint their skull? Are the catacomb skeletons actually hobos? Why do I keep asking these questions about a cartoon for little girls?

The most annoying aspect of the whole movie is that the plot refuses to stick to its running time. The real story wraps up about 40 minutes in. The remaining 20 are reserved for the ride back home in which the monster girls and boys hop around the globe to retrieve their luggage. The movie doesn’t even bother transitioning well into this segment by stating “hey, don’t you want to see how we got back?” Not really. You got on a plane, right? Oh, you had to make some detours to get back some mystical book that doesn’t really have any major consequences? Why did I need to see this? I’m perfectly content if the movie were only 40 minutes. This segment doesn’t really add anything extra to the story. It should be its own short or bonus episode included on the disc – not an excuse to bloat up a movie to an hour.

Scaris, City of Frights may be the only half-decent movie I’ve seen out of Monster High, but it’s still held back if not by its one-dimensional characters then for its short story (which required an extra episode just to make it an hour). Once again, I must preference this review in that I’m not in the target audience. I’m not 12, a girl or collect the dolls. I’m just an adult man writing a negative review about a cartoon movie made specifically and unquestionably to sell toys to little girls.