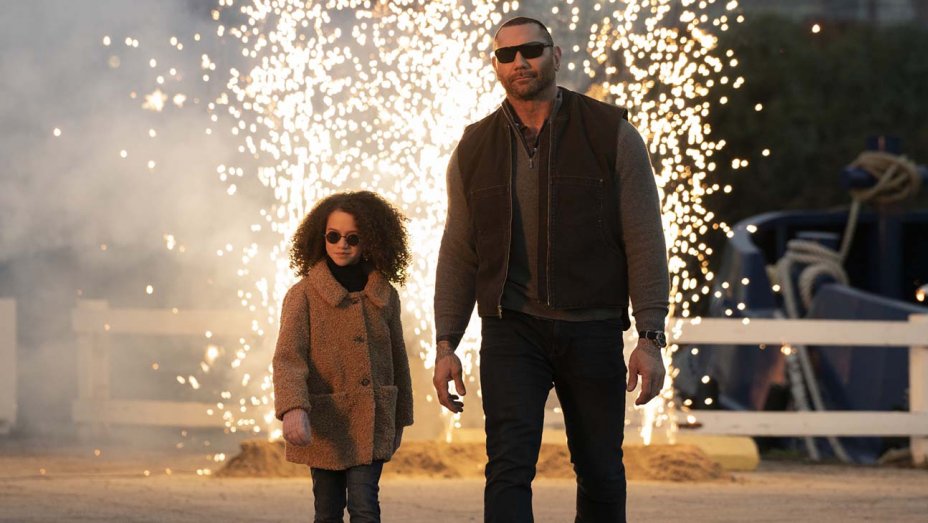 My Spy doesn’t even try to hide the fact that its action-movie bingo. It’s a familiar assembly line of action and comedy that is sure to garner some deja vu among its audience. If only the film had the extra dose of insight to satirize its tropes rather than dance around them for a mild roast of sorts.

Dave Bautista is placed in a role that it feels all action stars must pass through before they can become an icon. They must all go through some sweetly comedic tale of being paired up with a kid and having their tough guy exterior briefly torn down. He plays JJ, a former US Special Forces soldier now trying to make it as a CIA operative. He’s bad at his job in that he still shoots first and asks questions later, despite his job requiring a lot of questions. Chewed out by his boss (Ken Jeong), JJ is placed on surveillance for his latest job, paired up with the eager hacker Bobbi (Kristen Schaal) who is hoping for some tips in kicking ass.

Their job is keeping an eye on a little girl (Chloe Coleman) and her single mother, as they may be the key to a terrorist plot. Mark your bingo cards if you had Kindergarten Cop premise. But, uh oh, the plucky girl is smart enough to bust JJ and Bobbi, threatening to blow their cover. In exchange for keeping her mouth shut, JJ is forced to go through the hoops of filling in as a dad. He pretends to be just another tenant and proceeds through all the expected gags. He goes ice skating, slips, and falls on his back in slapstick fashion. He goes to her school for career day and frightens all the kids with his armed forces his knowledge. That knowledge attracts Chloe to want to learn how to be an action hero.

While the film goes through the motions, there’s some cuteness here and there. Of course, JJ will soon form a bond with the girl’s mother and maybe the whole dad angle is still possible. JJ’s bond with the little girl is witty enough to be quirky and charming. The back and forth between Bautista and Schaal is rather hilarious as well, considering they clash over how JJ will teach a kid about plastic explosives but won’t even teach Bobbi how to properly shoot a gun.

Where I started getting agitated was when the film started liberally stealing from other action films for unremarkable developments. Straight out of True Lies is a scene where Schaal tries to rush in with an automatic weapon but she accidentally drops it down the stairs and it accidentally kills all the bad guys. By the time the film gets to a scene where Bautista battles the big bad on a tarmac with a propeller plane active behind them, even Schaal raises an eyebrow to remark how similar this is to Raiders of the Lost Ark. Had the film played with these references it could’ve been a lot funnier but such ambition is not present. This seems most obvious when JJ tells his target that movies about spies lie about what happens in real life, yet he still does all the stuff we expect out of Fast & Furious and Mission Impossible anyway. It’s a sitcomish move as though Bautista says “oh no, there’s no way I’m doing that bit” and then the camera cuts to him definitely doing that bit.

My Spy is disappointing for having a chance to subvert the action-comedy genre and then more or less just fall in line with the rest. It’s far from the worst of these action-hero-goes-soft considering the strong performances and capable action sequences. But when a film has a chance to not just be more of the same and does so anyway, this picture ultimately ends up being little more than Bautista’s rite of passage. Hopefully, he can move onto more cunning pictures that have the guts to play with the genre rather than a stroll through it.