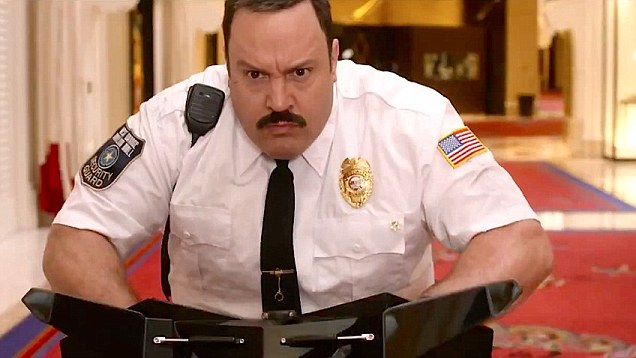 I’m struggling to find the right words to slay Paul Blart: Mall Cop 2 without using “fat” or “stupid.” It’s rather hard since that’s all there really is to the character and direction of this sequel to the 2009 picture nobody asked for. There’s no cuteness to his idiocy since he has virtually no heart. There’s no humor in the slapstick which mostly involves Kevin James falling flat on his butt. Even the fat gags were incredibly lame to the point where I expected the movie to give up and just make “you are so fat…” jokes. But there is one other word that comes to mind in the way that it is practically plastered all over the picture: sellout.

This movie was shot at the Wynn Resort in Las Vegas. It is the first movie to take advantage of Las Vegas’ new tax credit for shooting movies. The movie will slow down at various scenes to point out the decadent of the hotel’s interior and exterior. The owner Mr. Wynn himself shows up in the picture for a brief cameo. If this is all sounding quite familiar, you may recall the similar movie-making tactics of Happy Madison productions. Many a movie has been produced under the banner by shamelessly appealing to the location-sponsoring overlords. The cast and crew don’t seem to mind as they get a vacation out of the ordeal. Take a look at the special features for Blended where Adam Sandler and his friends seem to be having a ton of fun in Africa when not shooting their terrible romantic comedy there. I have no doubt that Kevin James and company probably had a lot of fun as well shooting in Las Vegas – more fun than the audience will ever know.

The story is practically copied and pasted from the original script with a find and replace from mall to hotel. Wouldn’t this technically make Blart a hotel cop in that he’s operating outside his domain? He attends a security guard convention to be honored for his work as the tubby hero of the earlier film. Dragging along his college-anxious daughter, the hotel comes under attack by terrorists who are smart enough to use detailed technology to steal from the building, but not smart enough to dispatch a pudgy Blart. It’s a strangely odd farce in the way Blart is able to disable such evil men in between getting beaten up by animals, hit by cars and falling on the floor from lack of sugar. His action methods don’t have some cunning nature to his weight either – he’s fat when the movie wants him to be and a lucky hero when the script wills it so. No Kung-Fu Panda style for this tubby cop.

There’s a passively lazy tone throughout the movie the way it goes through the motions. In a scene where Blart’s blood sugar is low, he crawls on the floor towards the dripping of a child’s ice cream cone. He secures a few drops in his mouth and regains his energy. Not enough energy to suddenly perk up and leap off the floor in a heroic return to form, but merely enough to slowly rise and walk away. I suppose the joke was that he consumed ice cream drops. Or maybe it was the sight of Blart crawling on the floor. Or maybe there is no joke and it was intended as a serious commentary on low blood sugar. Whatever the intent, it is alien in the way the movie will stop dead for several of these scenes that are so unfunny they have transcended boredom into a white space devoid of anything interesting on-screen.

But this time Blart has some help in the form of security guards from around the country. A chance for new and interesting characters? Nope – they’re required to be just as one-note and simple as Blart. All of them are proof of the wasted potential in this picture. There’s a large black woman who has served as a mall security guard at the Mall of America in Minnesota. She has no interesting stories to tell. She has no unique accent or traits of the region. She has no method of security that differs her from the others. But she is fat which means she can smash her chubby frame into the bad guys with ease.

Paul Blart: Mall Cop 2 is not funny, entertaining or overly offensive – it’s just a dead zone of comedy where ideas come to die and clichés come to cozy up. I sat there watching Kevin James go through the motions, slide across the floor and waddle through this tired and recycled script. I did not laugh, wince or grit at the screen. I just sat there staring off into space, getting lost in the picture and hoping that somewhere underneath the assortment of moving images was a joke. To my surprise, there was. Deep within Kevin James’ bulging eyes, I could see the reflection of the director Andy Fickman behind the camera. Peering closer, I could see into Andy’s eyes as well. And deep within his eyes I could see the true joke in all of this: it’s me. I watched this movie. I wrote about this movie. Paul Blart: Mall Cop 2 exists in this universe thanks to the people who watch it out of curiosity or their love for Kevin James’ brand of comedy. The joke is that a movie like Paul Blart: Mall Cop 2 exists and that it can not be so easily halted by the likes of critics.

And then I realized Blart rhymes with fart – one guilty chuckle to pull myself back from the void.