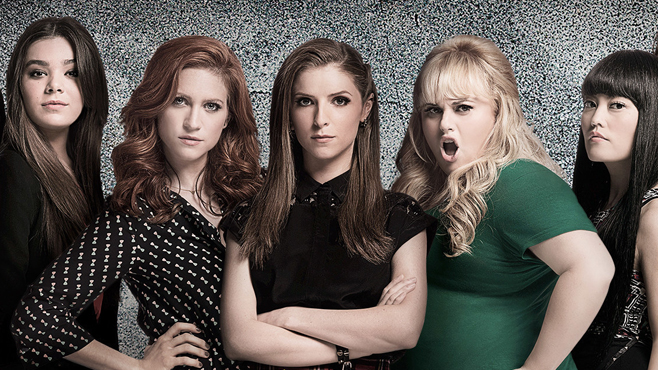 While Pitch Perfect managed to find a comical tone for a capella, its sequel doesn’t have any fresh ideas. All of the characters return with all their quirks and comedy, but have not developed or improved. The sequel finds them once again singing in another ridiculous competition, but with minimal difference in terms of stakes and progression. It’s an encore presentation of a melody that just doesn’t have the same ring on the second go around.

The Bella musical team return once again with Beca (Anna Kendrick) leading them in song as the heavy hitters of the International Championship of Collegiate A Capella – which is apparently a real thing. But their glory takes a tumble as comical tubby Fat Amy (Rebel Wilson) has a wardrobe malfunction that reveals too much and instigates Muffgate. Banned from the ICCA, their only to regain their title and continue to compete is if they can win the World Championship of A Capella –  a contest America has never won. So there’s a little more on the line in this competition instead of just having the group effortlessly transition towards the bigger contest.

The group begins to compete in underground and above ground tournaments of the a capella scene. Their rivals are naturally a German team – dubbed Das Sound Machine – dressing in all black and looking down on the Bellas with a snotty disposition. They’re sharp on their toes when it comes to song and dance, but amusingly lost when it comes to insulting the Bellas. David Cross plays an overly enthusiastic a capella fan that hosts a “Riff-Off” singing competition. He plays up his devotion to the sport as comically as you’d expect for a David Cross role. And the picture just wouldn’t be complete without the snarky and politically incorrect commentary of song commentators John Michael Higgins and Elizabeth Banks.

But what of the Bellas themselves? Aside from the two driving forces of Beca and Fat Amy, there isn’t much for any of them to do or expand upon. Cynthia-Rose is still is a lady-obsessed lesbian, Lily is still the strange Asian and Stacie is still overtly sexual. They all just pop in to deliver a few funny one-liners and nothing more. Even the new addition of Emily (Hailee Steinfeld) is mostly sidelined despite her raw talent as a legacy Bella with an amazing voice. What side plots the scripts offers with Beca and Fat Amy are nothing all that special either. Beca struggles to maintain a secret internship at a record label while leading the Bellas and Fat Amy develops a relationship with a rival singer. While these are interesting directions for the characters, they offer little more than a few laughs.

And that right there is the biggest problem with Pitch Perfect 2 in how it hopes to recapture that lightning in a bottle by not straying far off course. The songs are pleasing to the ears, but no more than were in the first film. The gags and jabs are amusing, but no more than they were before. There’s a massive sense of deja vu when watching such a picture that never aspires to higher standards – cautiously attempting not to rock the boat of its own formula. I want to root for the Bellas to win the big competition, but it’s a little hard to do that when all characters eventually boil down to simple jokes. If the series ever hopes to grow past just being a movie jukebox, it needs to find a better use of its characters and take advantage of its potential. When the only showstopper is how the Bellas shock the a capella world by actually singing an original song, it may be time to find a different tune.