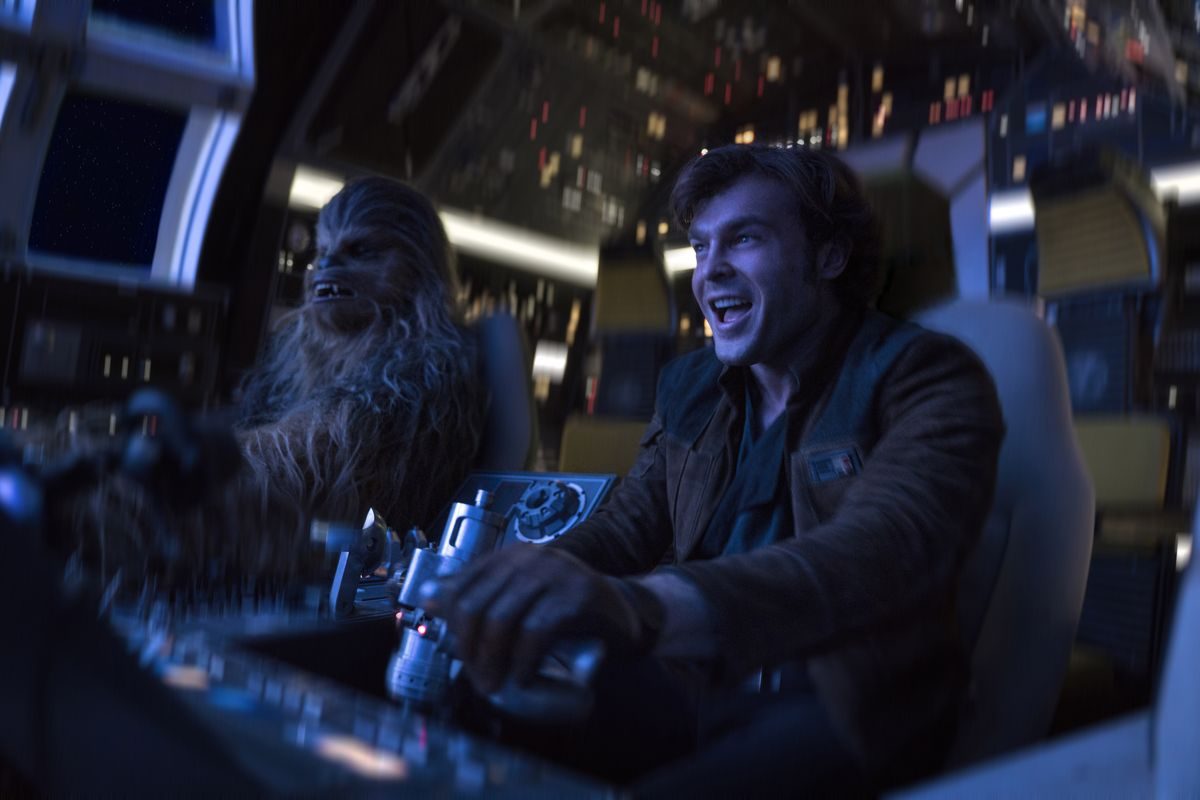 It should go without saying that there didn’t NEED to be a Han Solo prequel movie. It’s not exactly enthralling to watch the meetings of when Han met Chewy, his blaster, and the Millenium Falcon. I especially didn’t need to know how he got his name. These aspects are as underwhelming in the film as they are in theory. But when the story finally puts down the Star Wars nostalgia guide, it occasionally turns into the enjoyable sci-fi heist picture it should have been.

It’s somewhat relieving that Alden Ehrenreich isn’t trying to too hard to match the snark of Harrison Ford’s classic character. He pulls off a certain swashbuckling nature all his own, even if he has to push that Solo strut in many scenes. Despite the film trying to build up his origins with familiar lines, I dug how he isn’t the refined outlaw quite yet. He puts on a few hats before attaining that title, from a slave on a factory planet to a Stormtrooper on the battlefield. It’s only when he has lost his love Q’ira (Emilia Clark) to a gang and becomes enticed by heisting that he eases into being the cocky cheater he eventually becomes. It’s just too bad you really have to distance yourself from Ford’s Solo and all the callbacks that keep penetrating my vision to see Ehrenreich as more of a cosplayer than a movie character.

More engaging since there’s less to go off of is Han’s love-hate relationship with the pirate Lando (Donald Glover), looking just as dashing as Billie Dee Williams’ original character, mustache and all. He not only becomes a fun character to follow with his deceptions and failures just as spectacular as Han, but he also has a complicated relationship with the female droid L3-37 (Phoebe Waller-Bridge). How does that work, one might ask? “It just works,” ensures the droid. She’ll also fight droid rights and is more than a little bitter about working with humans. What an odd couple.

As Star Wars has been so ingrained in cinema history, the prequel has the problem of lacking danger for the likes of Han, Lando, and the Wookie, Chewbacca. Additionally, we know the romance between Solo and Q’ira won’t last, despite how effective their scenes are together. We also know there probably isn’t a bright future for the likes of Solo’s questionable cohort Beckett (Woody Harrelson) or the scarred crime boss Vos (Paul Bettany). And, to be fair, I’m willing to overlook the original trilogy comparisons and let this Star Wars story write its own western/heist picture distant from the familiar adventure mythos. I just wished the script would do the same so there weren’t so many knowing winks and nudges, as if the film keeps repeating the tiring marketing catchphrase for prequels, “Where it all began…”

Where the film does succeed is in its staging and action, essentially the hallmarks of all Star Wars films. A train heist has the added sci-fi zest of taking place atop snowy mountains and shifting gravity. A gangster lounge comes standard with a weirdly cybernetic siren singing duets with a blob of an alien. A mining planet is a dirty operation of hissing pits and masked overlords that literally ooze acid. And there are plenty of strange designs of creatures crowding card tables of scummy hangouts, even if a few of them look like a few more eyes or mouths were slapped on some familiar aliens. In bits and pieces, there’s a taste of a certain genre that ramped my hopes for the Solo movie I didn’t know I wanted. Rogue One did a stellar job at conceiving a Dirty Dozen/Seven Samurai style one-shot. Solo should have been a Western-style heist picture and it almost is. So close you can hear its engines struggling to reach that level.

The good news is that the third act eventually settles into its own thing where multiple twists and exciting action sequences come more naturally than artificially. The twists may mount a tad too high with a cameo that raises all sorts of questions that will probably never be answered, but a little surprise is essential for a film where we know everything that will happen to the central character, including his eventual death. The pacing is also fast enough so I don’t have to do much questioning, but it also doesn’t leave much room to enjoy these renditions of Solo or Lando. It seems as though most of the downtime in the picture is reserved for origins I didn’t need or care about. Did I really need to see the when Han met Chewy, or even how Han came to call him Chewy? I couldn’t care less about when Han first picked up his trademark blaster or first placed his hands on the controls of the Millenium Falcon. I fathomed it probably felt pretty exciting and it was. For Han Solo, that is.

Solo: A Star Wars Story strives to be a charmer of a caper, but keeps stalling on its own franchise safeties that keep it more corporately concise than artfully appreciative. There’s a constant lingering of Solo origin bullet points that continue to nag the audience like the most annoying Star Wars fan poking and prodding you with Star Wars facts you didn’t ask for. Can’t I just enjoy Solo’s heist plot without an insistence on highlighting Han’s future gig with Jabba the Hutt? What keeps this rickety project held together are the admirable efforts of a strong cast that frantically try to put charismatic duct tape over the cracks exposing the mess of a movie rushed out as a summer blockbuster. Again, there’s no NEED for a Han Solo movie and the lacking vision and confidence make stronger points against, dampening the more entertaining aspects of Han sneaking a kiss and Lando cheating at cards.