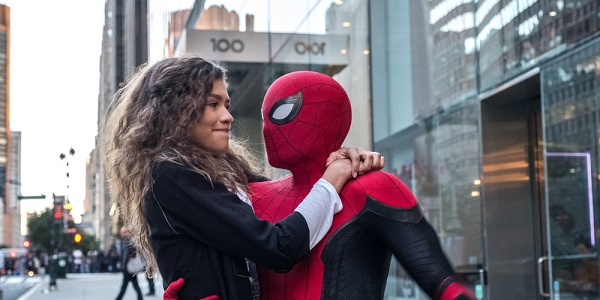 As an epilogue to Avengers: Endgame, Spider-Man swings into a new world that is a bit terrifying. After such a stellar legacy as the Marvel Cinematic Universe’s 11 years of great characters, does Spider-Man have what it takes to not only replace Iron Man but offer up a superhero outing just as strong as what has come before? For having such a tough act to follow, Far From Home is more than up to challenge, serving up a superior adventure while offering the comfort of what lies in store for the future of Marvel’s connected movies.

Right away, Far From Home takes an interest in how much the world has changed. The Thanos snap, for example, which briefly wiped away half of humanity for five years, has caused stress in things going back to normal. Think about it; Peter Parker (Tom Holland) now has to finish high school while his non-snapped classmates have graduated. That kinda sucks, but at least most of his friends got snapped along with him, including his geeky best friend Ned (Jacob Batalon) and his potential girlfriend MJ (Zendaya). Life more or less returns to normal with Peter’s high school science class once more on a trip that has little to do with science.

Also seemingly going back to normal is the superhero situation. With Iron Man gone, Nick Fury (Samuel L. Jackson) recruits Peter to once more become Spider-Man for another saving-the-day scenario. The threat: elemental monsters are ravaging the Earth. Jake Gyllenhaal plays a hero from another dimension that couldn’t save his own world. Yep, sounds like a typical superhero plot.

But this is why Far From Home stands strong as not only the best Spider-Man film of the MCU, but one of the top contenders of the over 20 movies in this franchise. It realizes that not only the civilization of this post-Endgame world but also Marvel audiences have become so accustomed to certain situations of these heroes and stories that it’s easy to deceive. This leads to a second act twist that isn’t too surprising but still deeply exciting for all the possibilities it presents. The new development puts a big strain on Peter who is already grappling with PTSD for fear of trying to live in Tony’s shadow, unsure if he can balance his high school life and superhero work. Now Peter discovers that he can’t trust his own senses when dealing with a new villain who takes advantage of warped perceptions, bringing about a stirring commentary on the nature of how revered superheroes and even superhero films are seen.

Of course, the Spider-Man tone and atmosphere hasn’t lost its touch since 2016’s Spider-Man: Homecoming. The teen comedy angle still feels refreshingly true, where the first third of the film embodies it so well. The superhero action is still fast and exciting, featuring lots of European locations for Spider-Man to swing across as he stops the villain’s evil scheme, thanks to some great direction by Jon Watts. The writing by screenwriters Chris McKenna and Erik Sommers is still snappy with plenty of great comedic lines for the likes of Jon Favreau, J. B. Smoove, and Marisa Tomei to shine a little bit for how little they’re on screen.

Finally, I know this may not sound like much after so many Marvel Cinematic Universe movies where end-credit Easter eggs come standard, but stay for both on this one, more than any other Marvel film. Not only do these two endings give an entirely different outlook to the rest of the picture, but they shape a very enticing glimpse of how the MCU is in for more than just the same old thing. Far From Home is a refreshing and bold Spider-Man film that takes the chances that need to be taken to shake the cage to ensure there’s little staleness going forward. In other words, I can’t wait for the next Spider-Man film, which is saying something for a Marvel hero that has had