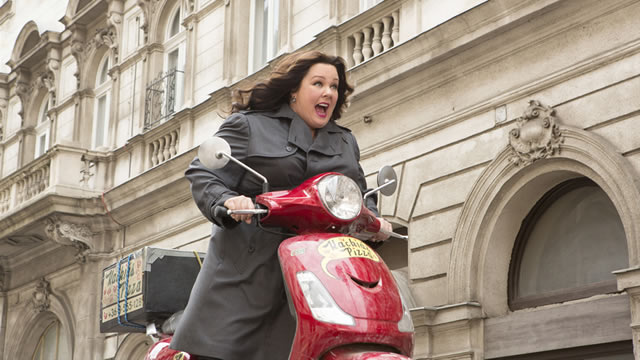 Despite having the most unoriginal title for a spy satire, Paul Feig’s latest action/comedy finds plenty of original humor per his fearless style of comedy. He once again uses Melissa McCarthy in a role that emphasizes her glee over girth, but doesn’t play dumb about her capabilities. You won’t see McCarthy doing daring jumps off high peaks to avoid an explosion, but you will see her get involved with smarts and instinct that are believable. But, most importantly, Spy is hilarious while still paying its respects to the genre.

It’s refreshing to finally see McCarthy back in a role that challenges her more as opposed to her just phoning it in as the bloated dunce of pictures such as Identity Theft and Tammy. She starts off as the most interesting character of the plot – a desk jockey for secret agents in the field. As Jude Law dashes around lavish locations – shooting bad guys in a tuxedo – McCarthy directs his every move from the proximity of the enemy to the ETA of backup. She’s tactful with her response, but giddy about her crush on the man she watches over.

Eventually McCarthy will have to end up in the field, but the script swiftly skips the training montage. It turns out she’s already been trained well enough and is ready to do her job. Initially assigned with working recon, she’s given secret identities the likes of cat ladies and frumpy saleswomen. Her secret weapons come in the disguise of baby wipes and a Beaches watch. As you might expect, she’s not very favored by her organization. Even Jude Law fails to read the signs of her flirting. Rather than being a series of mean-spirited jabs that could engulf the picture, McCarthy simply laughs along knowing she’ll eventually get her moment to rise above that mountain.

While we watch her climb, she’s a general riot in more ways than one. I especially dug her fight scenes the way she frantically tries to wrestle away knives and guns with a comedic grip, but capable strategy. It’s so strange to see a woman outside of ideal appearance for an action star able to hold her own in the spy game. And, unlike some ludicrous idealism that could easily make such a picture go off the rails, her determination and victories are believable. Well, for about as much reality can be solidified in a picture with guns and nukes.

But McCarthy isn’t alone as she has plenty of strong actors to play from. Miranda Hart is perfectly cast as the overly eccentric co-worker who tags along as much she can as McCarthy’s fast-talking sidekick. Rose Byrne makes for a great ambiguous villain that scowls with her royalty status among terrorists. My favorite supporting character is undoubtably Jason Statham who appears to be reprising his role from the Crank movies the way he rattles off his insane moments of action in the spy field.

While Feig does a fantastic job playing up the characters and comedy, he still brings some class to satirizing the spy genre. The soundtrack sets the perfect tone, the locations are lavishly decadent and the action is very intense. Even the opening and closing credits embody the true spirit of a spy picture with respect and cleverness. It should also be worth noting how bitingly violent the picture is featuring everything from impaled hitmen to melting throats. It could be written off as just a shock element, but there’s something just so funny about a secret agent who accidentally shoots the bad guy in the face when he sneezes.

The movie does have its small lulls as when the plot goes a bit heavy on the reveals and the camera remains on just a tad too long for improvisation. Those minor qualms aside, Spy is a well-oiled machine that delivers on Feig’s brilliant level of clever comedy and his surprising direction of action. Similar to Feig’s The Heat, McCarthy once again acts as the glue with her amazing wit and exceptional comic timing. And while it certainly has a progressive edge with its largely female cast in an R-rated action picture, it’s still a hilarious picture first. Take note of how McCarthy’s appearance acts as a part of the joke, but not THE joke. You’ll see her struggle with her self-esteem in passive-aggressive nuggets, but you won’t see her fall on her butt or break a seat with her weight. Such gags are too easy, too tired and out-of-place for a picture that succeeds as the most pleasing spy comedy since Top Secret.