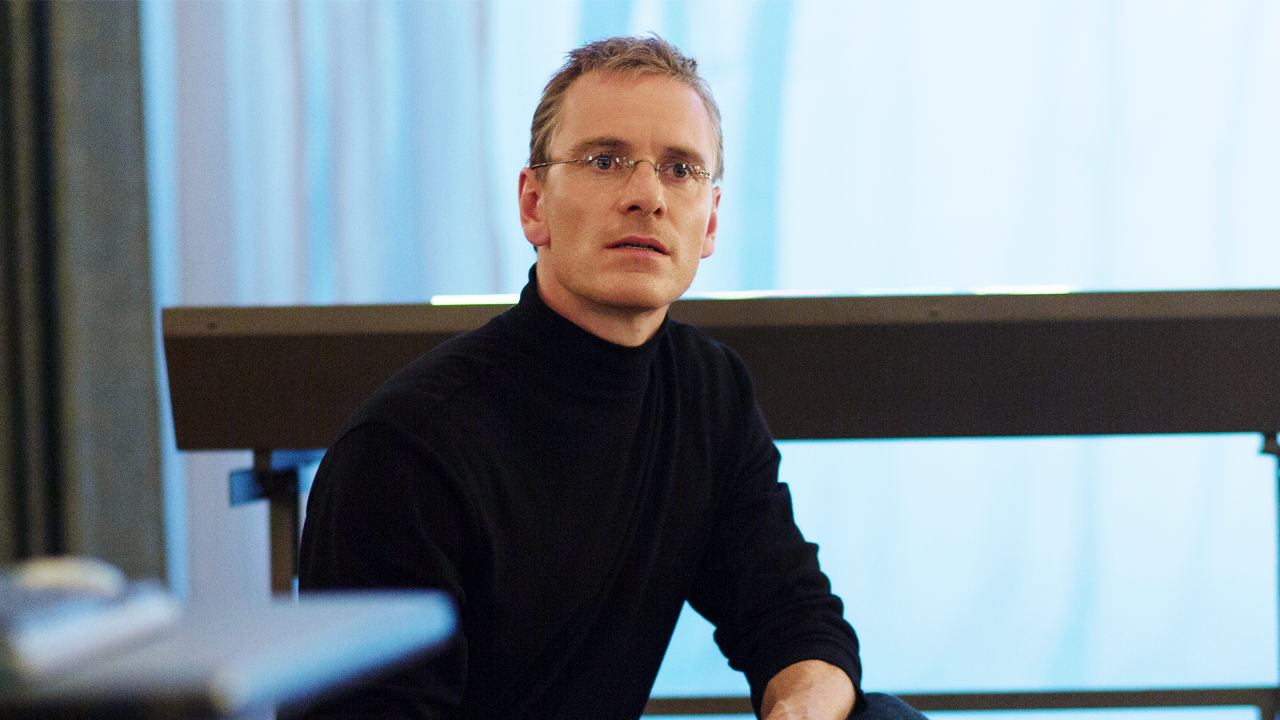 What more can be said about the life of Steve Jobs? There are numerous documentaries and books divulging all his technological achievements and human failures. There are dramatizations that range from respectful (The Pirates of Silicon Valley) to bland (Jobs). So what is there left to explore in a new docudrama with an all-star cast? Director Danny Boyle and screenwriter Aaron Sorkin find just the right angle to portray the creative genius of Apple: as a flawed human being reeling behind the curtain before facing the public.

For this picture, we focus on Steve Jobs (Michael Fassbender) during three crucial events of his career: the 1984 launch of the Macintosh computer, the 1988 launch of his NeXT computer and the 1996 unveiling of the iMac. The movie doesn’t focus so much on the event itself as it does on Jobs’ behind the scenes. At the launch of the Macintosh, his ex-girlfriend Chrisann Brennan and her daughter Lisa visit Jobs. As Steve and Chrissan argue over money and public perceptions, Lisa sits in front of the Macintosh computer. She plays around it with for a few minutes and Steve is floored when he witnesses her create a drawing in MacPaint. For a brief moment, he is taken out of his element as the calculated and arrogant creator. Her presence brings down the tension and breaks Steve down to more of a human with purpose than a shrill innovator.

For most of the picture, Lisa is present as a part of Steve’s life that reminds him of what he’s pushed away. She’s the only one whom Steve seems to have the most casual and interesting of conversations with. It becomes a tragic relationship in how Steve puts more effort into his career than spending time with his daughter. He is absent for much of her life growing up, but she continues to remind him of what he’s missing out on. It’s not until Lisa is old enough for college does Steve finally realized how important a daughter can be in your life.

When not conversing with his daughter, Steve is doing battle with the various co-workers that grow to detest the man over time. Steve Wozniak (Seth Rogen) quickly becomes bitter with Steve refusing to acknowledge the Apple II team on the grounds that such development is in the past. CEO John Sculley (Jeff Daniels) booms with frustration about Jobs’ refusal to work with the Apple board of directors, which led to Jobs being forced out of the company. The only one who seems to both know the man on a deeper level and still despise him is marketing executive Joanna Hoffman (Kate Winslet) who attempts to steer him in the right direction amid all the chaos. All of these people become byproducts of Jobs’ ego and it’s up to him to right the crucial mistakes of his career.

The all-star cast is in top form. Fassbender’s portrayal of Jobs doesn’t quite hit the visual level of a dead ringer, but his performance is powerful enough to match the core personality of the technological icon. There’s grace, arrogance and fear all mixed into a character that would probably be feeling all these before a big event. Kate Winslet almost deserves more credit for her portrayal of Joanna Hoffman, matching her both her dated style and insistent buzzing around Steve. The rest of the cast all feel perfectly utilized as well considering most get to share personal scenes between them in Fassbender with exceptional dialogue.

Danny Boyle’s Steve Jobs is perhaps the most focused picture on the man and his legacy. It skips through most of the history we already know and delivers on the juicier moments of Jobs’ life. Seeing what literally happens behind the scenes is far more exciting than witnessing the actual press conferences built around the premise. Most technological history buffs are aware of the failures of the NeXT and the Newton as well as the popularity of the iMac. The script briskly glazes over these touchstones for Apple to keep a strict eye more on character than innovation. Even the origin moments of Steve’s past with Wozniak and the bitter internal feuds of Apple are kept to minimum flashbacks. We get to follow along with Steve in his fast-paced race towards the stage, realizing that there’s much more on his mind than the conception of the iPhone.