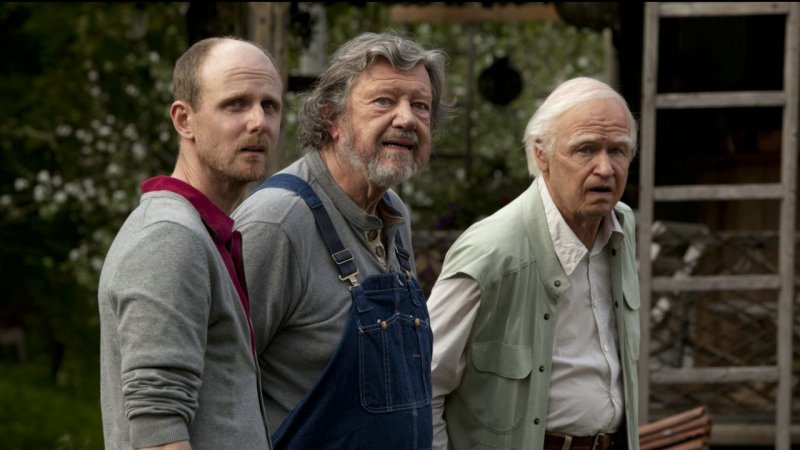 Not all old men are refined gentlemen of sage wisdom. Allan is one such character who never really fit it in with society or even understood it all that much. All he understands is explosions. Firecrackers, dynamite, atomic bombs – anything that can blow up is what he fancies. When a fox murders his favorite cat, Allan lays a trap for the vicious beast and blows him to kingdom come. He’s not maniacal – at least in his own mind – as explosives are just his innocent calling. He doesn’t comprehend the death and destruction he brings even after witnessing his bombs decimate many. I wanted to like him in all his dark comedic brilliance, but there’s just something about this twisted Forrest Gump that didn’t quite put me in the right frame of mind.

The premise begins as the title implies and then snowballs into elderly antics. Allan finds himself escaping from his retirement home on his 100th birthday to have himself a bit of adventure. While he wanders around the Swedish countryside unwittingly carrying drug money, he recalls his long and disturbing life. Through his many travels, he ran across several dictators and masterminds. His obsession with explosives took him far in the world, acting as a more destructive version of Forrest Gump. He cared not for the politics of the wars he took part in – he just wanted to blow stuff up real good. Allan also doesn’t care much for laws either the way he has no problem killing uppity young punks and hiding the body. Life just seems so passive and easygoing for a man who doesn’t appear concerned about charges of murder and robbery.

There’s a dark comedic edge to this farce of the elderly on a rampage and the life of a quiet demolitions madman. But much like the protagonist, the story finds itself meandering around in its own whimsy and ridiculousness. On his travels, Allan gains some allies in the form of snide thief, a gun-toting artist, a middle-age college student and an elephant. There’s not much of an arc or a goal to any of this – even the case of the missing money and old man is never given much attention. The story mostly plays out like an extended version of Mister Magoo with various mishaps and slapstick worthy of any cartoon.

The picture does have its smile-worthy moments for how fantastical it wants to be. There’s an allure in how Allan nonchalantly proceeds through the wars of the 20th century – drinking with Franco and dancing with Stalin. When initially hired as an explosives expert during the war, he cares more about his bombs than he does the war itself. When he loses his passion for blowing up bridges, he states that he got tired of it all and just decided to do something else. The same logic applies to the movie as when it gets tired with one storyline, it swaps it out for another plot or character. A perfect embodiment of the random memory of the elderly or just unfocused writing? I wouldn’t dig that deep into a comedy featuring an elephant sitting on someone and dynamite blowing up a chicken coop.

Sometimes amusing and sometimes warped, The 100-Year-Old Man Who Climbed Out the Window and Disappeared has all the charm of watching a series of Looney Tunes cartoons. It’s silly, snide and at times witty, but best taken in small doses. This makes the picture a great recommendation for a rental, but not worth treasuring for a purchase.