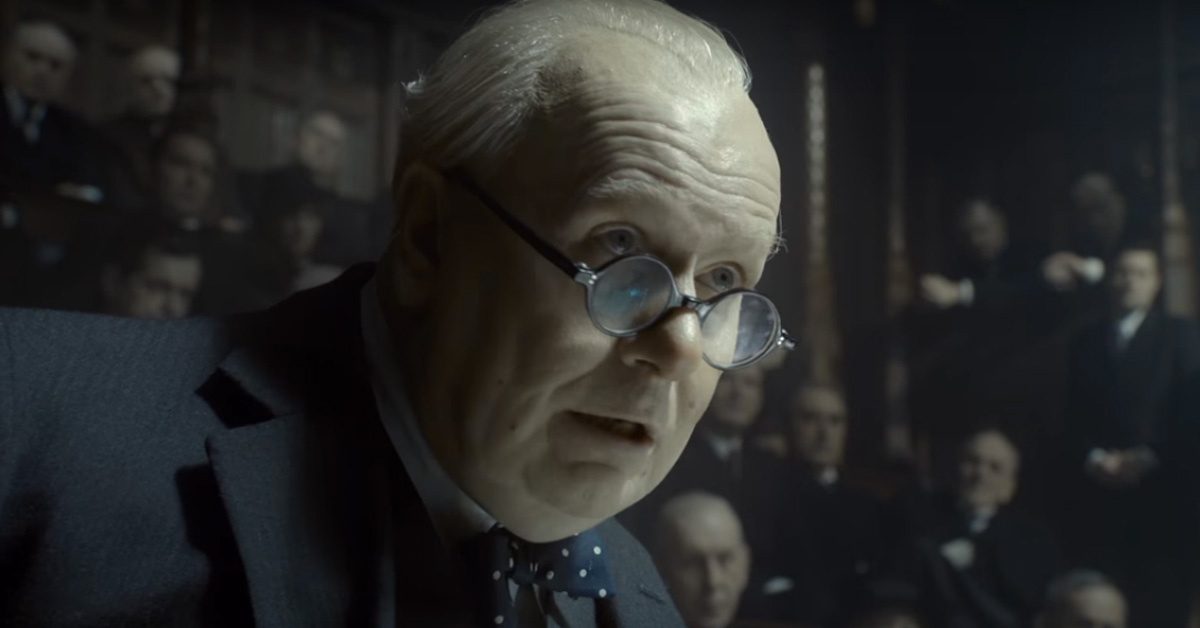 When Gary Oldman first appears on screen as Winston Churchill, I couldn’t believe it was him. He embodies the historical figure with the right amount of girth, waddling and cantankerous mutterings of a man with the noisy gears constantly grinding in his head. It is such a flawless performance that director Joe Wright lets his camera get in close to notice every detail; the quivering of his lips as he prepares to deliver a speech, the solace he seeks in every cigar, and the look of doubt buried deep within his eyes. Oldman loses himself so deeply in the role that the audience does as well, making for one of his best performances of his career.

The film covers a brief yet precise area of Churchill’s life when he was sworn in as Prime Minister of the United Kingdom and chosen for preparing the nation for a time of war. Most seem to agree he is the right man for the job even if they don’t fully trust him with the position. One political player notes that he’s a man of 99 bad ideas and 4 good ones. Churchill is a man who doesn’t seem to have to lament on the bad decisions but will still acknowledge them with soberness. In a lighter moment, he makes the peace symbol with his fingers towards the press but is later informed by his secretary Elizabeth Layton (Lily James) that his gesture was more of an “up your bum” than a “victory” communication. A lesser politician so concerned with his image would have been sweating bullets. Churchill is jolly about it.

This is a character so unpredictable that King George (Ben Mendelsohn) is terrified of this man and his almost inhuman drive. While having lunch with Churchill, George asks how such an old and overweight man could drink so much alcohol. Churchill has an answer that is perfectly hilarious: “Practice.” And he certainly seems like a man that has learned to juggle many plates over time. From the moment he wakes up, he has already started rambling off a telegram before he a foot has left his bed or Elizabeth has placed herself at a typewriter. He smokes like a chimney, drinks like a fish, and is overflowing with so many thoughts and ideas that meetings and dictations will often lead into the bathroom. Yet with all this busy work, he still finds time to wittingly address his wife (Kristin Scott Thomas) in loving talks and take a deep interest in the common man to pursue public transportation.

There are many fine performances from the supporting players in the just the right amount of scenes but this is clearly the Gary Oldman show. It’s a good thing too as he’s the fascinating subject of the film as a man who doesn’t seem human for doing so much. But then there are those intimidate moments where we get in close and see that past his determination is fear. As the film goes on, this trait becomes more apparent, arriving in small bursts that grow larger as the days tick by. When he first addresses the nation over the radio, there are a few seconds of mute hesitation on his face when the live broadcast light beams red. Casualties mount around Dunkirk and the man finds himself so flustered and drains that he starts to babble and mutter, trying to cling to some sense of leadership that his party has not afforded him.

Joe Wright’s direction is tight and focused on the film’s leading man without much fat in the filmmaking. There are certainly plenty of secondary arcs that Wright could have gotten lost within, including the schemes of Halifax and the war with the Germans. But the film never laments too long as these aspects, only long enough to make the point about the reality of the time. This makes the film especially engaging if paired with Christopher Nolan’s Dunkirk, a war film that perfectly showcases the rescue of soldiers with Operation Dynamo. If you’re a history buff, this should be a quintessential double feature.

Though Oldman is the major draw, The Darkest Hour succeeds as a whole at bringing history alive. Scenes that could have been boring, such as the house of commons, are provided some stellar cinematography. The musical score feels engaging and exciting without being too overbearing or epic. The direction is fast and to-the-point, the days progressing quickly and the tension of tough calls feeling real for men that mostly bicker. Nothing feels third-rate for an era and a figure that has been replicated on film many times before.

But, of course, Gary Oldman is the centerpiece that brings it all together. His Churchill is a portrayal so fully realized with every mutter, shout, cigar, drink and laugh. Wright’s camera pushes so far into Oldman’s face I could see the veins on his forehead but still couldn’t see Oldman himself. He has set the bar unreasonably high for the next actor who dares take on such a role.