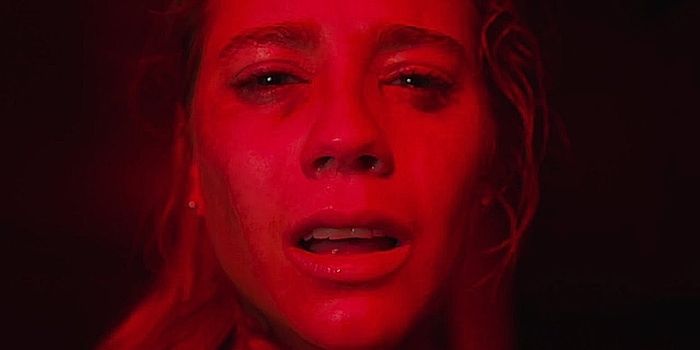 High school students go into the school at night. High school students don’t come out. It’s the simple formula for yet another found-footage horror that proceeds through the motions more than it should. Here we have a high school that is a truly spooky building with its mysterious hidden hallways and secret crawl  spaces. But to get to these scary scenes of dark corridors to the unknown, we have to spend some time with some bland characters and put up with their meager excuses to go into the haunted school. And, of course, we’re stuck with following them in the found-footage format of camera phones and camcorders.

I’ll reiterate what I’ve stated many times already for this format – just give the characters camera glasses. They can put them on and forget about them just as easily as the audience rather than wondering why these terrified kids are still filming themselves being trapped. They even use the light on the camera to keep up some visibility in the darkness and still don’t turn off the recording. If this format really wants to continue, it would do well to adhere to a modicum of logic.

As unlikable as this teenage foursome appear in the picture, I must admit there is a believable dynamic to their characters. A jock desperately tries to impress a girl by attempting to act in the high school play. His dorky A/V buddy constantly shoves the camera in the jock’s face and anywhere where he can find a juvenile laugh. Convinced that the jock will fail miserably on opening night, the two of them decide to break into the school the night before the play and bust up the stage. And if that plan wasn’t crazy enough, they invite along their insane female friend and document the ordeal with a camera.

After some expected teen drama when the jock finds his crush followed him inside, the doors are locked and frights begin. The killer of the evening is the ghost of a student who died during a play of The Gallows, the very same play that was to take place the next day. Accidentally hung by faulty equipment, the angry soul tortures the kids with his haunted school antics. When he’s not pulling the usual ghost pranks of locking doors and replacing items behind their back. The teenagers wreck the stage, look away, look back and the stage is perfectly reassembled. The teenagers then start freaking out and blubbering with questions about how that happened. The prank is continuous throughout the picture that you’d figure the characters would catch on to the repetitive nature by the third act.

When the ghost isn’t pulling these goofy attempts at scaring teens, there is actually some scary imagery mixed in to this standard found-footage horror. Delving deeper into the mysteriously dark hallways and crawl spaces, the teens discover everything from creepy televisions that operate without power and a swinging corpse dangled high above a dark shaft. But to get to this point, you have to be with the characters in their journey. And when their excuse for going into the creepy, dark crawl space is “ah, screw it”, it’s hard to be with a horror experience that is clearly strung along without real progression. Characters run off, some get lost, some get locked behind doors and the deaths and panic set in with amateur horror logic 101.

The ghost of deceased student Charlie appears briefly here and there with the standard hangman bag over his head. His weapon of choice, obviously, is the noose. But how many ways can you kill somebody with a noose? You could grab the teens by different body parts and rip off limbs, I guess. But, no, Charlie really has a thing for the neck seeing as how his was snapped. Unless the rope itself is made of some impenetrable ghost material, I question why the teenagers don’t pack some scissors or a knife to simply cut the rope.

While there are some proper ingredients for an effective found footage horror, The Gallows just never takes off as it meanders around its spooky premise. Two of the teens find themselves walking along a catwalk. They turn around as they think they hear something. They turn back and the catwalk is littered with nooses. It’s a scene that perfectly sums up the laziness of the experience. We’re waiting for a scare and get served up the same old frights drooped about.