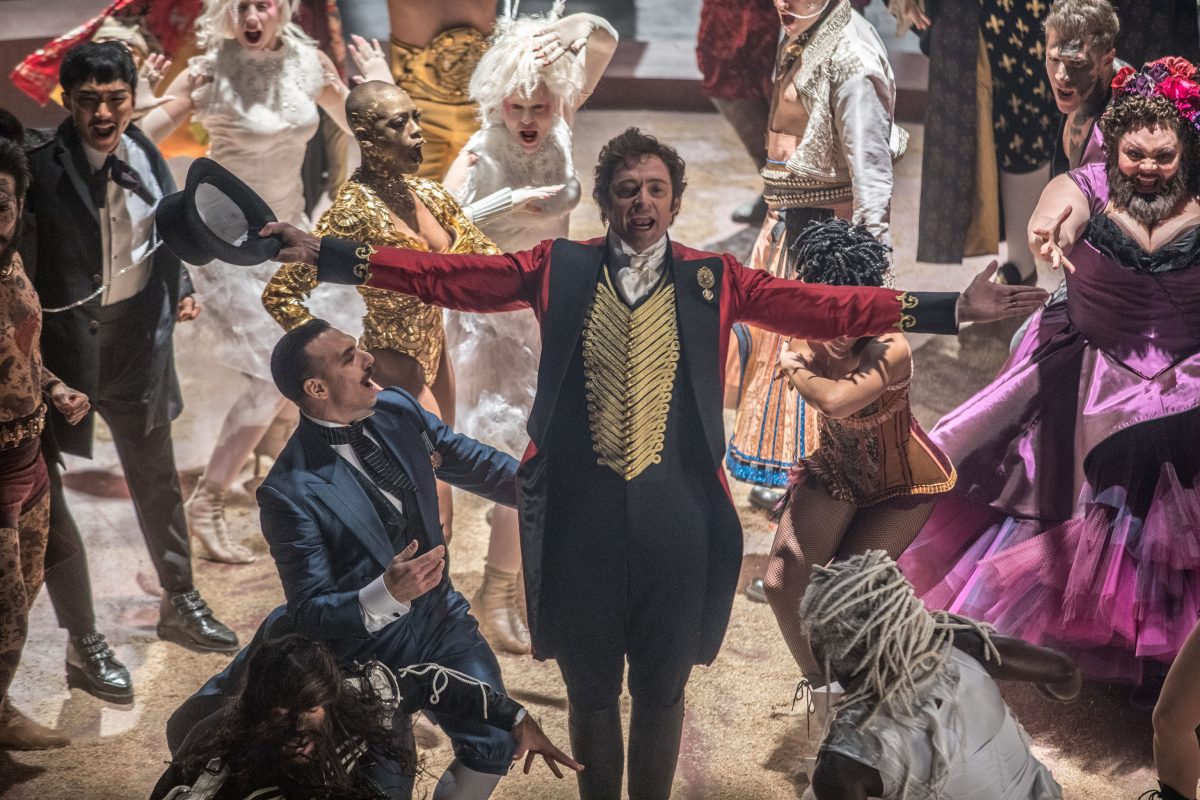 Songwriters Benj Pasek and Justin Paul have been hailed for their amazing lyrical work on last year’s musical hit La La Land, a film with a stunningly invigorating soundtrack of jazz and orchestral wonder. They’re touted on the poster of The Greatest Showman as being hired to breathe that same amount of energy and toe-tapping to the tale of showman P.T. Barnum. Much like Barnum, they do a stellar job at hoodwinking audiences into attending this spectacle for the promise of an entertaining musical. And while director Michael Gracey certainly delivers music and sequences of grand design, there’s an aroma of a machine to its assembly as opposed to the heartfelt biopic of amazing feats this production was going for.

P.T. Barnum (Hugh Jackman) is sold as a man of dreams and wonder, dialing back on the sterner dramas of his struggles towards fame. As a boy, he wanted to entertain and vowed to be a success in the eyes of those who doubted him. He grows up to marry his love Charity (Michelle Williams) and has two lovely daughters, but it’s not enough. Having lost another job, he takes some significant risks to soar to the top. He opens a museum of oddities, hiring his daughters to help him sling a few flyers and sell a few tickets. He will later recruit uncommon performers for a stage act, from the vocally-talented bearded lady (Keala Settle) to the surly horse-riding dwarf (Sam Humphrey). But that’s still not enough. He recruits the playwright Phillip Carlyle (Zac Efron) to boost his marketability and later acquires the vocal stylings of Jenny Lind (Rebecca Ferguson) to take on the road.

Armed with Broadway numbers and a PG rating, the film aims to be little more than an easy-to-digest vocal and vibrant tribute to Barnum’s showmanship. On the one hand, it’s quite the show. The musical numbers are big, full of life, and elaborately choreographed. Moments that could have been boring are pumped up with that usual flair of song and dance, as when Barnum and Carlyle discuss a partnership over drinks with perfectly timed gulps, clinks, and sliding of bottles. On the other hand, however, there’s not a whole lot balance out the ensemble cast that is mostly cast aside for the main event. The troupe that Barnum assembles is a marvel of talent for their detailed stage sequences, most notably Keala Settle and her magnificent voice. But much like the characters they play, they ’re mostly cast aside when the curtains close. It’s a rather odd choice in balance considering Settle’s “This Is Me” is the highlight song of the picture about having confidence in yourself.

There is plenty of drama in Barnum’s life that is strangely glossed over to keep the magic flowing. When he finally reaches the top, he makes a scene of himself infant of Charity’s parents. When he takes Jenny Lind on a country-wide tour, he loses all his money that he invested without his wife’s consent. He’s a huckster with problems but problems that are easily solved by, what else, more bamboozling. The show must go on even if the drama won’t. Even the romance between Carlyle and the trapeze artist Anne Wheeler (Zendaya) feels strangely unfulfilled, despite a beautifully shot sequence where they come to terms with their feelings over romantic acrobatics.

I could easily overlook this soft approach to Barnum’s history if the film delivered on its music. While the soundtrack is competently made, it feels strangely out of place for its Broadway and modern approach that comes off more standard than sensational. Most if not all of them come with the expected beats of belting tunes and stomping floors. I never felt as though the songs were astounding so much as they were just doing what they had to do, adding most whimsy to a tale that plays timid with its tension. I took a gamble with the film’s predictability. There’s a moment when Barnum believes he has lost it all and drinks his sorrows away at a bar, only for his oddity collective to follow him inside and get him back in the game. I figured a song was coming with dancing on the bar and decided to take this moment to go to the restroom. I returned and, sure enough, spirit-lifting melodies had to another dance breaking out in the bar.

One of P.T. Barnum’s most notable phrases is that there’s a sucker born every minute. And with 105 minutes of song, dance, theatrics, and elephants, you can bet there’s going to be plenty of people who will be roped into a good time. I can’t fault them for that. There’s a lot of effort put into making this biopic a lavish picture with big music. But in its breezy approach to presenting an entertaining showcase of talent, I felt as though the film was selling me more of Barnum’s show than Barnum himself. In other words, don’t go into this picture expecting to learn a whole lot about the man. More importantly, don’t take it as a representation of the vocals of Jenny Lind. She was a singer that specialized in beautiful opera numbers. I’m not so sure how I feel about her singing the song “Never” like an orchestral pop song that could be placed alongside Frozen’s “Let It Go.” A nitpick, probably, but it’s hard to fall for this decadent puppet show when the strings are so visible.