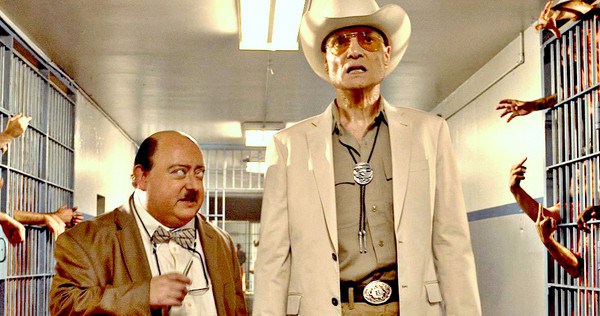 The Human Centipede trilogy is a despicable and vile concoction of horror and director Tom Six is fully aware. He basks in his crude and mean-spirited creations by promoting them as the most offensive and politically incorrect movies ever made. His teasers and trailers proudly boast such claims as Tom Six flashes his devilish grin at the screen, feeding off the disgust from the audience. I’m sure it would please Six to no end if he were to read yet another review that savages his work as a cinematic abortion smeared with blood and fecal matter. But unlike his previous movies, The Human Centipede 3 surprisingly ends up being the least offensive and least gross of the trilogy (as odd as that sounds).

It retains the meta-commentary nature of the earlier film – existing in a universe where the past events are recognized as movies – but does away with most of the dark and dreary. In place of the grayscale darkness of a drab United Kingdom is the overly sunny environment of a sweaty Texas prison. Previous Human Centipede stars Dieter Laser and Laurence R Harvey return as an insane prison boss and a pudgy accountant. Laurence becomes obsessed with the Human Centipede movies and purposes the process of connecting mouths to butts as a new method for rehabilitating prisoners. Illegal and immoral? Yes. Outside the realm of this universe? Absolutely not.

Unlike the last two movies – which were dismal experiences of torture – this third entry makes an attempt to play the scenario up for TROMA levels of comedy. Dieter Laser parades around his prison wildly wagging his gun, randomly shooting prisoners, shouting at the top of lungs and spewing out racial and sexist statements in between spit. Laurence R Harvey wobbles around as a fat little mouse eager to please his master. They run a terrible prison where everybody is a savage beast that will not hesitate to shoot you dead, lop off your limbs and/or rape your body. But the politically incorrect tone and atmosphere is meant to be a comedy in how overblown it appears. It fails, but at least it’s not aiming to be the most sickly depressing picture.

The twist to all of this is that this is the longest and most effective chain of bodies stitched together. Whereas the earlier films ended with disastrous results of one man struggling to make this operation successful. The prison has a large team of doctor working to make sure this human centipede is assembled correctly with consideration for the viability of each candidate. So clean and calculated is this process the prisoners can actually be removed from the chain after they’ve served their time to enter back into society. I’m not sure how well a prisoner who had to eat another prisoner’s fecal matter for an extended length could adjust to the outside world. Then again I’m not sure how well a governor would react to such punishment in the prison system. Both seem to be okay with it all. Why wouldn’t they be? It’s not like there is any morality or logic to any of this.

For as surgically clean as the process becomes, the picture is still plenty disgusting. There’s a hefty heaping of filthy shots involving and mean-spirited acts of violence and disgust. And, yet, not as gross as I’d expect. Maybe it was due to The Human Centipede 2 being ground zero for joyless horror, but it felt as though Tom Six was running out of tricks. He was fighting in uphill in that he outdid himself with the previous film that made me lose all hope in humanity. This picture appears more as a terrible cartoon where I didn’t find myself as appalled by the wacky, insane warden howling to the sky with a pistol.

For as unlikable as Dieter Laser warden character aims to become, he has a twinge of likability in his meta-referencing dialogue. When he first learns about The Human Centipede, he screams at his sidekick about how he doesn’t want to hear about some twisted filmmaker and his poop fetish. He later finds a prisoner giddily dancing in his cell to be a part of the centipede to which Laser shoots him dead shouting “nobody should enjoy this!”

Finally, Tom Six appears in the picture as himself – smugly and silently observing what his films have inspired. There’s a twinkle in his eye present from his teaser trailers that continues to boast about how he made the audience wretch with the worst movie ever made. Sorry, Six – your movie isn’t that worthy of such a title. I know you really tried to make the most rancid display ever put to film and it certainly is very putrid. But your capper to your trilogy just comes off as mediocre in comparison to your previous efforts. If it makes any sense at all, The Human Centipede 3 is a sub par attempt at being the worst movie ever made. And being a failure at aiming for failure just isn’t good enough. Or bad enough.