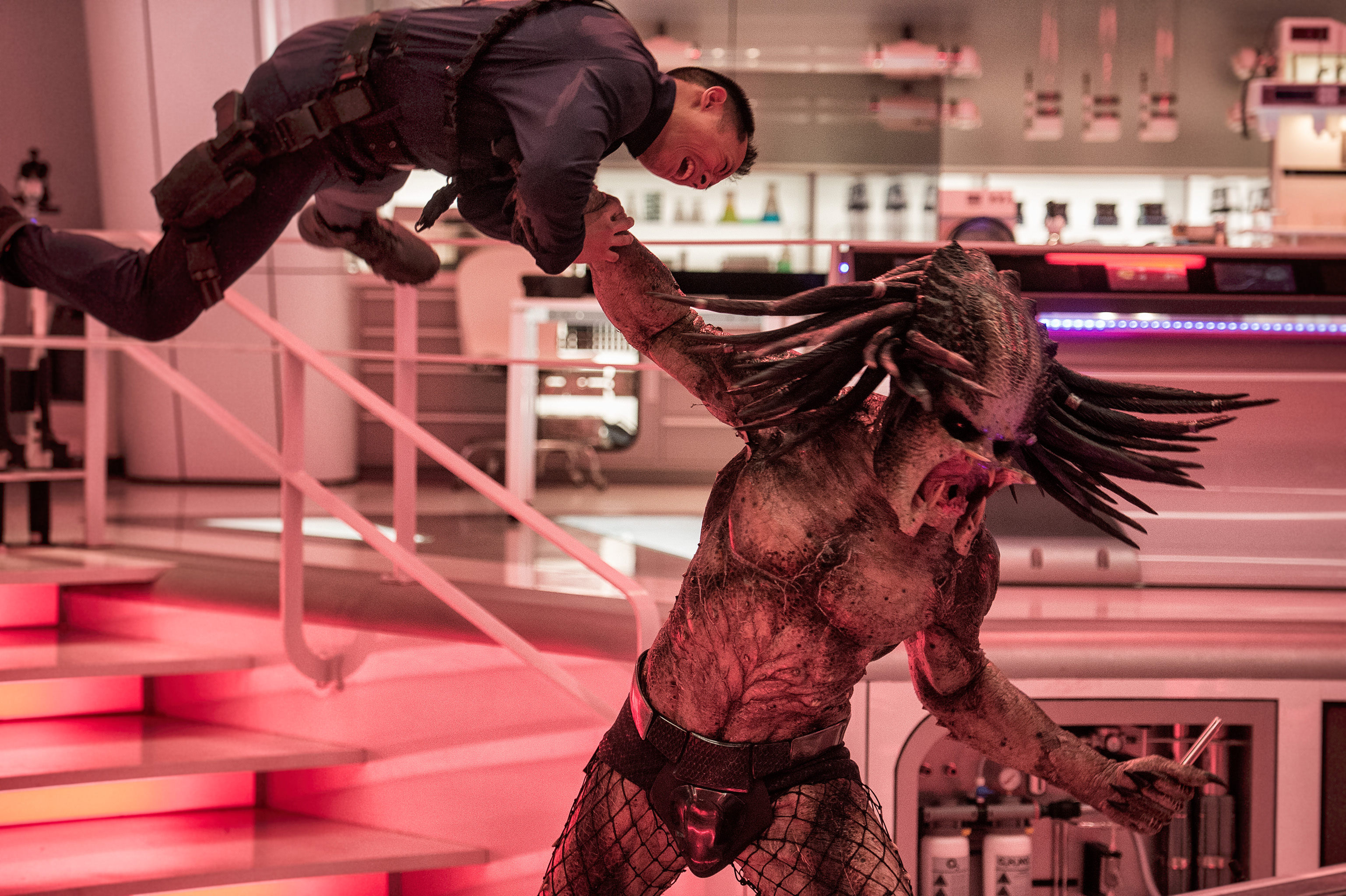 There’s something so unbelievably bonkers about Shane Black’s take on Predator that make it narrowly fun amid its messy hit-or-miss method. Rather than go for a more modern and serious retread of the classic action tale of gun-toting soldiers versus high-tech alien hunter, Black throws his picture so far deep into the pool of zany it should come labeled as a comedy, decked out with much winking in its silly banter and over-the-top gore. And sometimes, amid the massive mess of this nutty production, it works.

No time for bland set up in this movie! You know what it’s about and Black wastes no time getting that Predator on screen in record time. Within a few minutes, we’ll find our hero of mercenary sniper Quinn McKenna (Boyd Holbrook) doing battle with the multi-mouthed human-hunter from another galaxy. You’ll get your blood, guts, cloaking, explosions, spaceships, etc, in record time. But in trying to race towards the action as soon as possible, a lot of odd and dumb actions must be accepted on the fly. For example, why does McKenna decide to swallow a small Predator sphere that ensures cloaking? I know he’ll need it for later, but it conflicts with his plans for the other alien artifacts of having them shipped to his personal mailbox behind on funds (also dumb).

We could question all this, but what would be the point in that? Black isn’t aiming for some intelligent and refined Predator picture; he’s smart enough to know that after so many of these movies taking themselves seriously we’re overdue for some mockery and levity. Every remake/reboot/re-whatever always has this kernel of comedy, but Black goes the extra mile to ensure this picture is a zany and meta monstrosity built more for laughs. A perfect example of this can be seen in the obligatory lab room segment where scientist observe a captured Predator and tell us everything we need to know. Olivia Munn plays a scientist that breaks up the monotony of exposition by inquiring why the alien is called the predator when he’s not hunting to survive. The reason by the male scientists: Predator sounds cooler.

The only area the film seems to take itself seriously is in its brutally bloody action sequences where the Predator(s) rip humans to shred. There are lots of scientists and government soldiers present for him to massacre, but there’s also a band of comical mercenaries that act as the dirty half-dozen to take on the creature. Much like the first Predator, you can expect most of them to meet gruesome ends as the film works hard for that R rating. And it’s self-aware violence at that, going for the most ouch-worthy kills that go for the face, eyes, and crotch.

But Black’s method is so scattershot that it seems most of his writing is taking shots in the dark. The first act will make a few eyes roll when the obvious references from the classic film don for lazy laughs, talk of the ugliness of the Predator and referencing choppers (only they’re motorcycles, get it?). The second act turns goofy with the addition of McKenna’s kid walking around with the Predator tech and the attack of the Predator’s hound dogs which can apparently be turned into fetching dogs with the right amount of bullets to the brain. And the twist of the Predator’s arrival is one of the most ridiculous uses of Asperger’s Syndrome in a movie I’ve seen since The Accountant where Ben Affleck played an assassin with a theme of an autism emotion chart.

The Predator is a rollercoaster ride of a picture that strives for camp, sometimes hitting the sweet spot of silly. And, yes, for many the pitching of this movie as a comedy is going to come as a downgrade for the saga. But, let’s face it, the Predator franchise hasn’t been the same since Predator 2 from the 1990s. And let’s not pretend it’s on some intellectual high ground of horror like the Alien franchise. Shane Black, having previously acted in the first Predator movie, knows the score and that there are very places this franchise can go. And down the path of comedy, The Predator finds some stability in its erratic steering for fun.