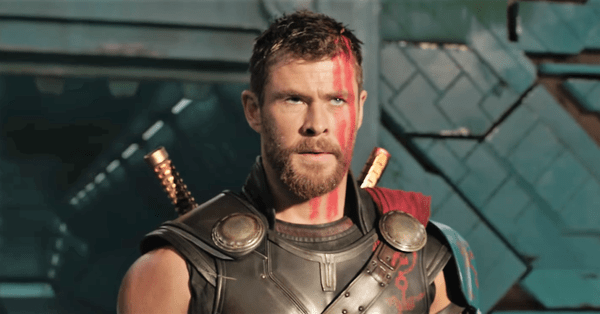 Thor always felt like a character of untapped potential. He’s a god of thunder that defends his mystical kingdom of Asgard from the other intergalactic forces of the nine realms. So why does everything have to take place on Earth? Finally ditching his female love interest, Thor finds on a new mission where he gets to fight more monsters, meet more odd characters and travel amid the most lavish of locations. It’s more fun to watch his adventures on a junker planet of gladiator combat than stopping yet another doomsday device from blowing up the planet. There are more than enough heroes on the planet for the hammer-wielding god to have a Work-From-Home-Realms week.

When we last left Thor (Chris Hemsworth), his trickster brother Loki (Tom Hiddleston) had secretly taken over their home kingdom of Asgard by assuming the role of their father, Odin (Anthony Hopkins). It takes Thor all but a few seconds to see through Loki’s disguise. He’s been around his brother long enough to see most of his tricks and betrayals coming a mile away. As such, the two have mostly mellowed out as siblings from being overly dramatic to rather chummy. They take a trip down to Earth, making a quick stop by Doctor Strange’s place for directions, and find their father on his deathbed, warning them of a new threat. It turns out the brothers have a long-lost sister, Hela (Cate Blanchett), and she’s not happy about being kicked out of Asgard.

By this point, we can predict how the rest of the story will go down. Thor and Loki will eventually team up to take down this powerful sorceress from ruling Asgard. But then the movie takes a pleasing turn when the brothers are diverted from their dimensional bridge and end up on a weird and trippy planet with a 1980s vibe. The planet is run by the Grandmaster, a colorfully charismatic villain played by Jeff Goldblum, giving the role every bit of Goldblum he can spare. Acting more aloof of his evilness, Grandmaster captures Thor and forces him into gladiator combat against his prized slave warriors. The head honcho in the pit is Hulk (Mark Ruffalo), finally resurfacing from the events of Avengers: Age of Ultron. Thor is elastic to finally have a familiar ally, but it’ll take a lot of smashing and convincing to get the big green warrior to aid him in his quest to save Asgard, even if Hulk seems to be more intelligent and vocal than he was before.

Even though the film builds heavily on what the previous Thor movies already established with the characters, Ragnarok still comes off as a completely different film in more ways than one. The visuals are no longer garish and drab, opting for a more vibrant palette akin to Guardians of the Galaxy meets Flash Gordon. Thor feels less like a stoic brute with irrational emotions and a more carefree hero that is little more mindful and clever when it comes to saving the day. Hulk is more fun and conversational, having advanced past his brainless grunts of an emerald monster. Even Loki seems to have a more reluctant acceptance of helping his brother out when the chips are down. He’ll still sell out his friends and make a break for it when it benefits him most, but it’s much trickier for him now that Thor isn’t so easily duped.

A few more familiar character types round out the cast. Hela’s siege of Asgard is made possible by the turncoat warrior Skurge (Karl Urban). Thor’s third ally on the junker planet is Valkyrie (Tess Thompson), a deserter from Asgard’s old guard of soldiers that rode pegasus into battle against Hela. Idris Elba returns to the role of Heimdall, this time acting a secret protector of keeping the Asgard civilians concealed from Hela’s wrath. All of them are sufficient, but mostly present for scenes where they can barrel towards the camera for their cool slow-motion shots, not as cool as the director may think, even when set against classic rock.

Thor: Ragnarok, unfortunately, slips into the expected third-act showdown of all Marvel movies. While it doesn’t diminish the film’s unbelievably entertaining second-act of Thor’s wild junk planet adventure, it comes off as a lesser conclusion. Hela isn’t a particularly memorable villain, as her green outfit and thorny headdress look as though it was forged from the same shop of Suicide Squad’s Enchantress and Power Rangers’ (2017) Rita Repulsa. Thankfully, the film is kept from being a snooze from the zippy and hilarious direction by Taika Waititi, rarely slowing down the picture with bland dialogue or routine action scenes. His pep and style make this Thor movie the best of the lot where it’s easy enough to enjoy the surreal sights Hulk fighting a big dog and Thor smashing spaceships.