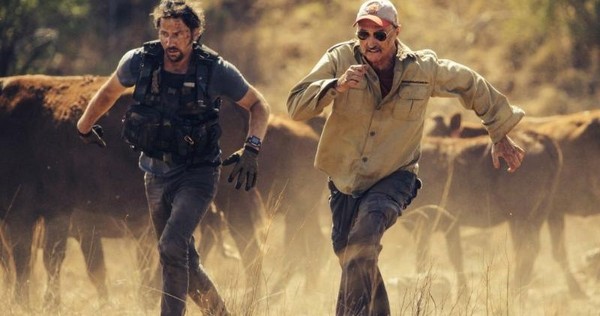 Did they really make a fifth Tremors movie? Yes. Did there need to be a fifth Tremors movie? No. Is it even any good? Surprisingly, yes. For being a direct-to-video feature and the latest entry in a dead franchise, Tremors 5 manages to be a rather pleasing bit of campy monster-hunting action. Am I lowering my expectations having spent so much time in the direct-to-video soup? Perhaps, but this is still one of the more enjoyable bowls of both the genre and the series. And sometimes you just want to enjoy a crazy movie about exploding bugs.

The series staple Michael Gloss returns for the role as the mustached gunmen Burt Gummer. Now a seasoned veteran at dealing with the wormy Graboids, Burt now has his own survival television program where he showcases his monster-hunting skills. Such promotion brings with it pushy young brand manager Travis Welker (Jamie Kennedy). Taking the show abroad, Burt accepts an invitation to hunt Graboids in South Africa. But the plot grows thicker as more Graboids are discovered and a greedy black market dealer desires to have these monsters captured alive.

Naturally, Tremors 5 never takes itself seriously. It’d be hard to do so when the type of Graboid our heroes are hunting is designated as an Ass Blaster class, based on the fire it spews from its rectum to launch through the air. True to the campy spirit of Tremors, the script by the original writers maintains a certain level of fun throughout. Burt showcases his usual gung ho attitude with plenty of guns in tow. He’s such an amusing character that the movie actually has enough faith to lock him in a cage and work with very little. The addition of Jamie Kennedy to the cast is solid given that he perfectly inhabits the role of an eager young assistant. He never plays the role up too heavily by acting as a suitable counter to the crusty old Michael Gloss.

The monster hunting is heavy on the computer graphics, but the picture makes due with the best with what it has to offer. The Graboids don’t appear very cheap for such a production and actually look pretty decent in most scenes. There are some sequences that are awkwardly staged as when one unlucky soul is gobbled up by a Graboid launching out of the sand and swallowing before burrowing back. But there are also scenes that easily avoid being laughable as when an Ass Blaster flies off into the night with human prey in its claws.

Plenty of firepower is brought to the party as Burt goes hunting in South Africa. You’ll rarely find a scene where Burt isn’t armed with a trusty hunting rifle. He may not do as much shooting as I’d like, mostly just taking aim for a Graboid kills, but the picture tries to make up for it in the second act with a helicopter armed with missiles that decimates a Graboid nest. The movie at least delivers on the blood and explosions as the grand finale involves a giant burst of bug guts over an entire African town.

Despite some slow spots, Tremors 5 delivers on a genuine sense of fun for another monster romp down the direct-to-video series. There’s a surprising amount of charm in how it delivers on some capable humor for what could have been a tired change of location and smattering of computer graphics. It would be nice to see Kevin Bacon return to the series after all these years, but Michael Gloss seems to do a good job at keeping a certain level of enthusiasm after all these years. After five Tremors movies, he still has all the intensity with his cackling at victories and teeth gnashing at those who hinder his hunt. He owns this series and he knows it, despite the attempt in this movie to spur a passing of the torch. I also really dug the concept for his reality show that would fit in snugly on National Geographic or the Discovery Channel. If the series has a future, I would be more than okay with a Tremors TV series of Burt hunting Graboids around the globe. Could you imagine him running through the streets of Tokyo with a hunting rifle as monsters emerge into crowded intersections?