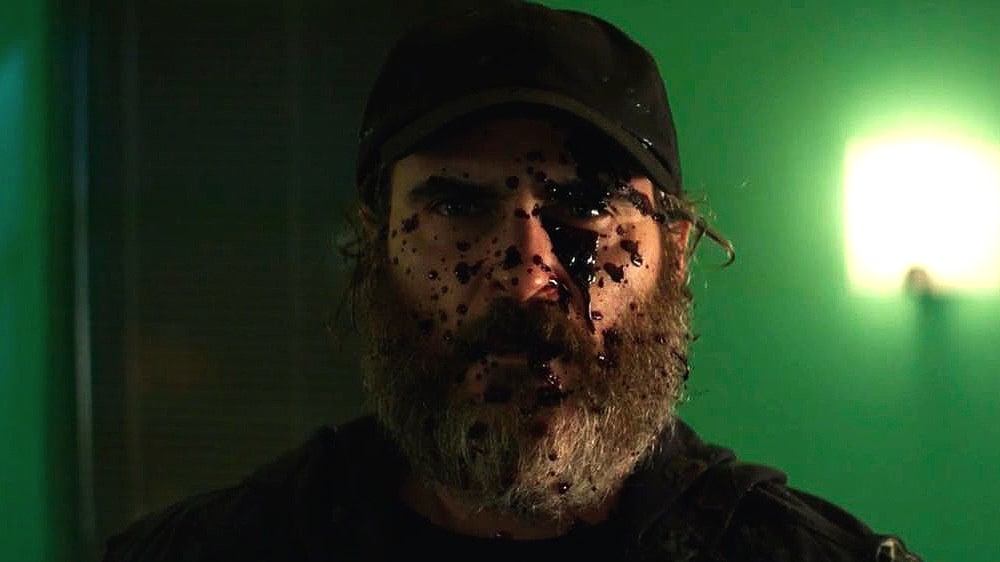 Few films of action and revenge come with a genuine sense of terror and pathos. Lynne Ramsay’s You Were Never Really Here has enough faith in the audience to piece together its broken hero, his traumatic history and a commentary on his nature of violence with hardly a word. In the tired and formulaic format of action-oriented revenge and rescue films, Ramsay has found something more artful and meaningful past the usual gun-toting. Here is a film that takes its time with its gripping violence, where every kill carries more weight than a rush of adrenaline. Rarely have I received such chills with the tale of a man killing people to save a little girl.

Joaquin Phoenix is in top form here as Joe, a bearded hitman with a past so tragic he never talks about it. He doesn’t even want to think about it. It’s only when the trauma briefly bleeds through that we slowly start piecing his story together. We can gather from shots in the Middle East of soldiers and bodies that he worked within the military. We can hear from his screams as a child that his childhood wasn’t a pleasant one. He won’t divulge the whole story to anyone and Phoenix’s quivering distance with others, outside of his kindly old mother, creates a mysterious figure that is always fascinating to watch.

Trying to shut out the bad memories, Joe takes on his latest job of retrieving the kidnapped daughter of a New York senator. As expected, he’ll have to battle his way through some bad men, but here is where the film proves its worth in its portrayal of violence. Nearly every assault by Joe on his attackers is witnessed either from an eerie distance or an unpleasant aftermath. It’s strangely haunting watching him slaughter his way through a seedy complex of gangsters from the perspective of the security cameras. Sometimes the footage cuts to a low-res recording of him pounding someone’s face in with a hammer and sometimes we cut to his victim just after he’s finished cleaning the blood off his fists. One of the most brilliant scenes features progressive cutting between superb shots to reveal the latest target Joe has taken out, holding for that quiet and creepy reveal of what has just transpired. Ramsay still isn’t afraid to get in close with the violence, however, as in a moment where Joe’s house is invaded. It’s a shootout with grit but ends with perhaps one of the most surreal of moments for a killer to connect with his victims as they pass.

Where other films put the pedal to the medal in showcasing all the carnage, Ramsay’s film takes its time to bring us into Joe’s world before the blood begins to splatter. Slowly, we hear his distorted translation of the noisy world and the cathartic unease of his work silent work. This careful building of character makes the action both subtle and blunt a far bigger punch. One of the most shocking moments takes place in a hotel room that starts with a noise-drowning gunshot at the door and ends with a gruesome struggle on the floor, the soundtrack always distant so there’s no distractions from the nature of the brutality.

Phoenix stands out in this role because it’s not a typical action hero character. Joe is overweight, unshaven, unstable, and a deeply fragile person. He can’t just shed a few tears and fire off a few rounds with a cocky catchphrase. Ramsay doesn’t let him off so easily. Few action films ever feature a gun-toting lead that feels this deep in thought and this mired with his demons. She also has the confidence to keep her film beautifully stage, expertly edited, and powerful with its progression. It may be one of Phoenix’s best performances simply for how he can say so much between that hat and facial hair than all the muscle and quips in the world.

I’d like to personally thank whoever made the call of editing the soundtrack for the end credits. By the time the film ended, I was sitting next to a middle-aged couple who were dissatisfied with the film, confusingly asking if the film’s thematically satisfying final note was that of a dream. At the exact moment they started writing off the film as confusing trash, that wonderfully pumping synth track kicked in at maximum volume and drowned out their sniping. The people who find themselves questioning Joe’s reality or unable to piece together his past are missing out on the true cathartic pleasures of an immensely entertaining, intelligent, and violent action movie that transcends and questions the genre it exists within.