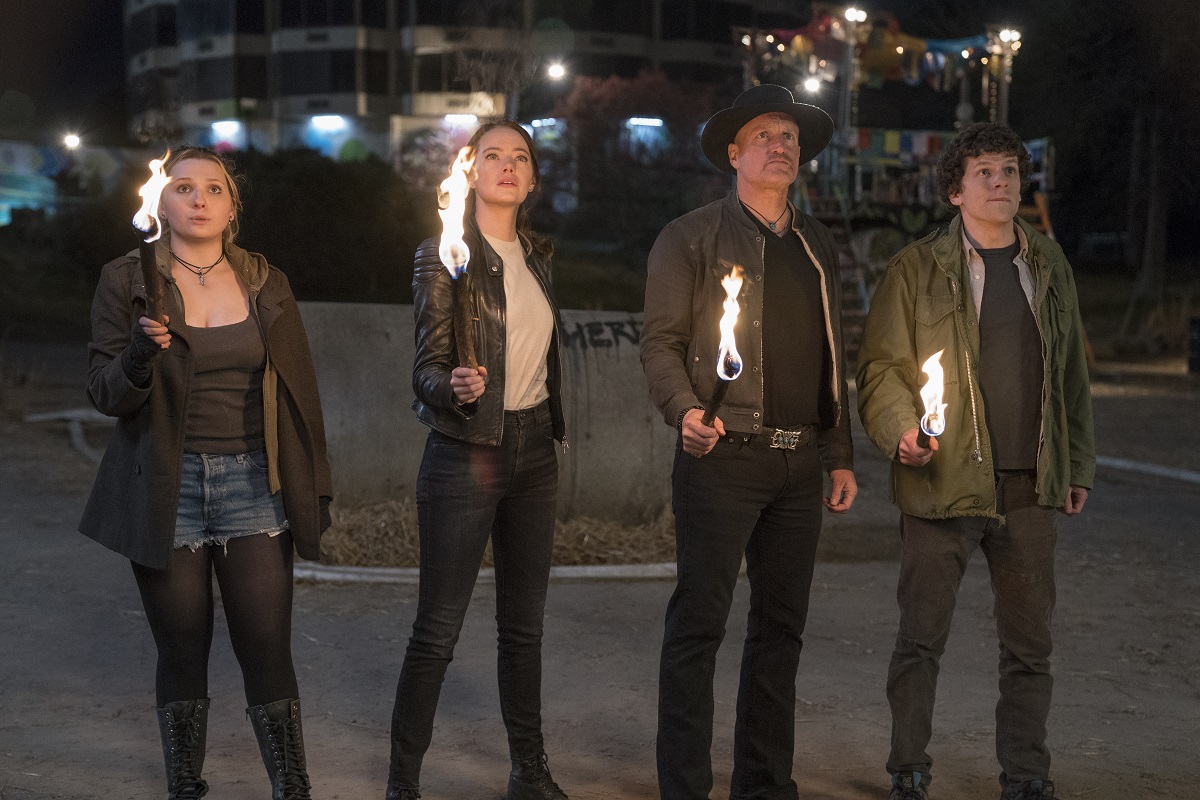 Ten years have passed but the post-apocalyptic world of Zombieland has more or less remained the same. There are some new zombie types, a few more non-zombie faces and plenty of new zingers to sling. The snappy sass of the familiar foursome is still present and strong enough to keep up with a fast pace. It’s just too bad that the cast of Double Tap has to pull double duty in a film that offers them little backup.

The film goes about giving just enough for each character to shine in their own way. Columbus (Jesse Eisenberg) is considering taking his relationship with Wichita (Emma Stone) to the next level by marrying her. It’s not an easy sell even with the Hope diamond, considering Witchita still can’t let go of her own rules of not getting too attached. Meanwhile, Wichita’s sister, Little Rock (Abigail Breslin), is hoping to find a love of her own. She can’t do it hanging around people much older than her and thus sets off on her own adventure. Not content to let her go, the father figure of the gung-ho Tallahassee (Woody Harrelson) sets out to find and protect her, even if it costs him his coolness by doing so in a minivan.

A lot of the old charm still works with these characters. The supporting characters they encounter, however, are another story. Nearly everyone they encounter on their adventures is a cartoon character of stereotypes I’m surprised they didn’t give them designations the same way Columbus labels zombies. They meet Madison (Zoey Deutch), a dumb blonde who has apparently been hiding in a freezer during the zombie apocalypse but feels as though she’s been there since the 1990s. She wears fur, dresses in pink, likes rainbows, is overflowing with perkiness and is keen to sleep with cute guys. The film poses her as a rebound for Columbus. But is there any doubt he’ll dump Witchita for an airhead with so little to offer?

Also posed as a love interest is Berkley (Avan Jogia), a hippie complete with the goatee, guitar and a pacifist mindset that has somehow kept him alive for the past decade. The film even doubles down on making him a stereotype by removing any doubt in the only questioning of his character. Little Rock asks Berkley if he has any weed and he looks at her as though he were insulted. “Do I look like the kinda guy who has weed?” Little Rock tries to apologize but, look, he has a big bag of weed. “Of course I have weed. I mean, look at me.”

Perhaps the most unique of the new characters is the Elvis-loving Nevada (Rosario Dawson) and it’s mostly because she doesn’t fit neatly into a stereotype. She’s naturally presented as a love interest for Tallahassee and they mostly just seem to connect over their love of the King. But I suppose a zombie apocalypse makes it hard to have a more compelling character. At least she gets to wield a machine gun and drive a monster truck over zombies so we know she won’t just be fodder.

With the film trying to busy itself with destinations of the White House, an Elvis museum and a hippie commune around a skyscraper, the escapades come off with a certain simplistic degradation. There was at one point going to be a Zombieland TV series on Amazon Prime which never went as far as the pilot. Double Tap feels more as those its many asides carry odors of a show in its twilight season. Consider the mirror universe style section of the film where Columbus and Tallahassee meet their exact doubles who trade rules, stories, and drinks. It’s cute for a bit but the constant clash of how they view zombie fights and post-apocalypse rules runs out of steam so fast their exchanges are mercifully put down early.

Zombieland still has some of that dumb fun even if the dumb must also be doubled for this sequel. There’s plenty of gooey gore and kick-ass action set to a rock soundtrack to give every giddy moviegoer a thrill. The Zombie Kill of the Week is also present and doubly more absurd in how the different ways a zombie can be killed. How Columbus is able to keep track of all these kills and how they reach him is never explained, nor is how he knew about a cool kill in Italy. I never question it because it’s too much fun. That’s why it’s such a shame the film resorts to tired cliches of characters for their adventure; I start questioning why the returning characters need such dead weight in a picture they can clearly hold on their own. This is not a strong sequel but, if nothing else, it is slightly aware of itself and campy enough that the post-credit Easter egg of both a short film and a cameo makes up for most of the shortcomings.