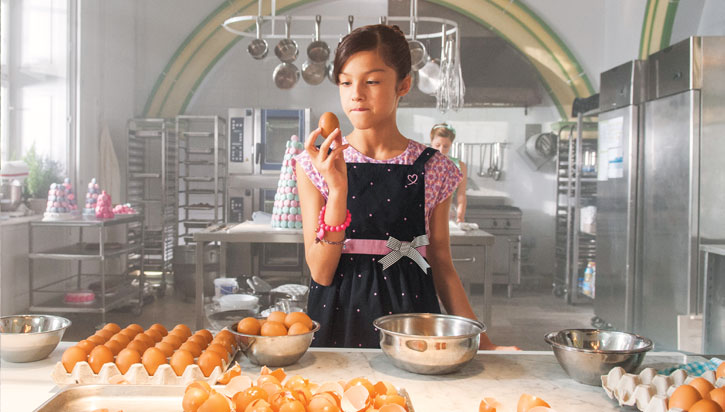 Once more into the American Girl franchise I plunge. By now, I’ve become used to the formula. I open the case, dig my way through the coupons of the expensive dolls and strap in for another enduring tale of little girls saving the day. Grace bakes at her family’s bakery that is struggling with bills and old equipment. She wants to start her own cupcake business and dreams of being on Master Chef Junior. In the first 10 minutes, I saw exactly where this was going. At least, I thought I did.

Because right as the plot is starting up – seemingly out of nowhere – Grace has to go to Paris for her extended family and to learn more about baking. This doesn’t become the central plot and is mostly treated as character building filler. It’s as if the writers had two scripts and couldn’t decide on just one. Or maybe their budget for shooting in Paris came midway through production of the Master Chef script. For whatever reason, the woes of Grace’s family struggling to make ends meet with their bakery is put on hold for 70% of the movie so that Grace can run off to Paris and learn to be the best baker.

This section of the film is entirely unneeded and practically defeats the purpose of real character growth. Most of the time it’s best to build up a character from zero to hero, but Grace doesn’t exactly start off as a bad chef. In fact, she’s a great chef. All she really does in Paris is step up her game from great to the best. What kind of a narrative is that? Perhaps if there were some more cockiness or doubt in her mind you might be able to sympathize with her more. But before Grace even went to Paris she was already starting her own cupcake business with her friends and having a great time. Sure, she learns some lessons from her trip in Paris such as how to be a team player, how to cook more creatively and how to better read people. But did you really have to go all the way to Paris for the second act just to learn all of that? Apparently we do because Paris makes for some great cinematography which you better believe the filmmakers milked.

Much like the Paris arc itself, the movie finds various subplots to busy itself. There’s subjects focusing on dealing with a new baby sister, trying to impress a hotel to serve your desserts and how to find your passion for baking. There’s also a cute dog included in these hi-jinks by the name of Bon Bon because cute dogs are almost a requirement with direct-to-video family movies. This is all filler and there’s little reason to care how any of this plays out as it is merely a means of keeping the running time above an hour. Most of these events are played up way too high for slapstick and goofy comedy that is better suited for a sitcom. Maybe it is at just the right level for a direct-to-video movie, but this is still a sharp contrast to the tone of previous American Girl movies.

By the time the movie actually gets around to the Master Chef Junior third act, I just didn’t care anymore. Grace needs the prize money to buy a new oven for the bakery? Of course. Grace’s competition is a snobby chef who was born with a silver spoon? Sure, why not. It’s not like there’s any logical development or flow to any of these events or characters. Why bother building up a nemesis for Grace throughout the picture when you can just slam him in the climax at the last act? To the movie’s credit, I will admit that Grace does a lot of baking and that there is a lot of good looking food in the movie. That is, when it’s not being splat in faces or slipped on across the floor for a meager attempt at a laugh.

As far as these American Girl movies go, Grace Stirs Up Success is a surprise for how flat it falls on its face. With uneven storytelling and a heavy reliance on slapstick, it’s baffling how such a script could be whipped up with two decent stories fused to become a lackluster combination. If it had just been Grace Goes To Paris or Grace Saves The Bakery, the movie would at least have a flow. Still, kids may get a few laughs from the hi-jinks and enjoy the shots of France. At it’s highest, this is a rental.