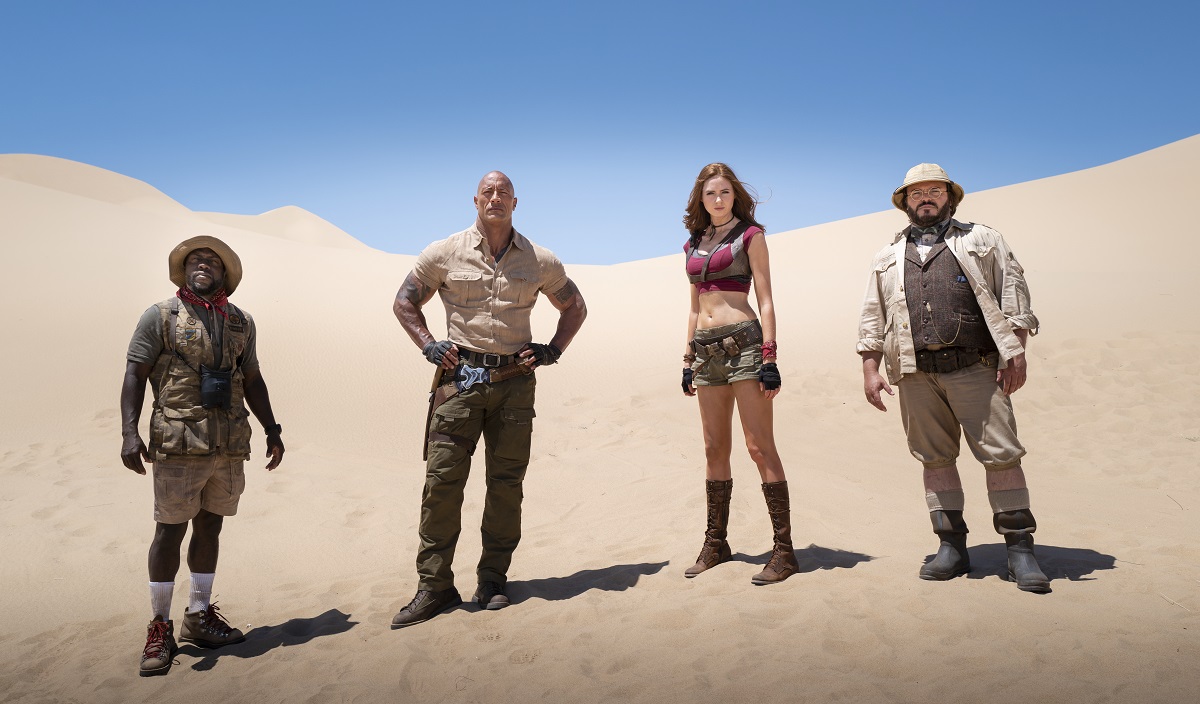 To warrant one more playthrough of Jumanji in its quirkier video game format, there has to be something more than just a reason to return. Something needs to be shaken up in the game. The characters need to have more of a reason to go an adventure than merely surviving a video game adventure. And there’s thankfully a big enough bounty of ideas to make The Next Level a sequel more fun than routine.

One aspect I adored was how the characters have grown since the previous film. The four teenagers turned video game heroes were more or less stereotypes after escaping from Jumanji. They have since gone onto becoming more comfortable with themselves and their friendship. Well, all except Spencer, feeling his life hasn’t turned out as comparatively great as his friends. He’s so depressed that when coming home for the holidays, he’d much rather spend it with his cynical grandpa (Danny Devito) than hang out with his old gang of Fridge, Martha, and Bethany. Feeling at his lowest, Devito tells Spencer that live only gets worse from here on out, considering grandpa’s crumbling relationship with his former partner (Danny Glover).

This outlook on life is all Spencer needs to dig back out that Jumanji video game and jump right back in the digital jungle adventure once more. One might think this would be a stupid act but, be honest, wouldn’t you risk death for the chance to feel as powerful as Dwayne Johnson? The only problem is that the game has been damaged since and isn’t functioning correctly. This means that when Spencer’s pals enter the game, they do not get to choose their characters. Also, Devito and Glover come in tow. Now trapped in bodies they didn’t sign up for, they have to survive the game once more.

The story hasn’t really changed from the last film. There’s a MacGuffin missing. There’s a warlord to best. And there’s plenty of dangerous locations to scale and topple. Admirable and beautifully staged as these scenes are, including one brilliant bit of traversing rotating bridges, they’re mere the facade on which to place the greater character chemistry. Some of that draw comes from the premise of the all-star ensemble trying to pull off different personalities. Some of them don’t work, as with Johnson trying and failing to do his best Danny Devito. Some of them are perfect, as with Awkwafine doing the best Devito parody ever. Some are just weird in how they revert the characters back to their stereotypes, as when Bethany jumps back into the role of Shelly (Jack Black) she quickly turns back into the airheaded teenage girl she was in high school. Chalk it up to the game errors.

The aspects that draw the characters back into the game or suck them in for the first time are at least intriguing. I enjoyed watching how Spender and Martha try to mend their relationship and the old-timer partnering of Devito and Glover after they spit years ago. The big problem with this is that most of their arcs seem to resolve just before the big action finale of stopping the big-bearded warlord and his hordes residing in a snowy castle. By that point in the film, we’re mostly just sticking around to see how much cartoony fun can be mustered from Johnson punching people really hard and Karen Gillan doing dance-fight choreography.

For the character interactions of easily frustrated young folks and video game illiterate old folks, there’s still plenty of genuine comedy throughout that rarely feels stale. The wit keeps up just as fresh even if the rest of the adventure feels more like an add-on than a whole new game. The cast all brings their A-game so that even when the Kevin Hart character is reduced to screaming about cake being his weakness once more, there’s a few more smiles left in the bit.