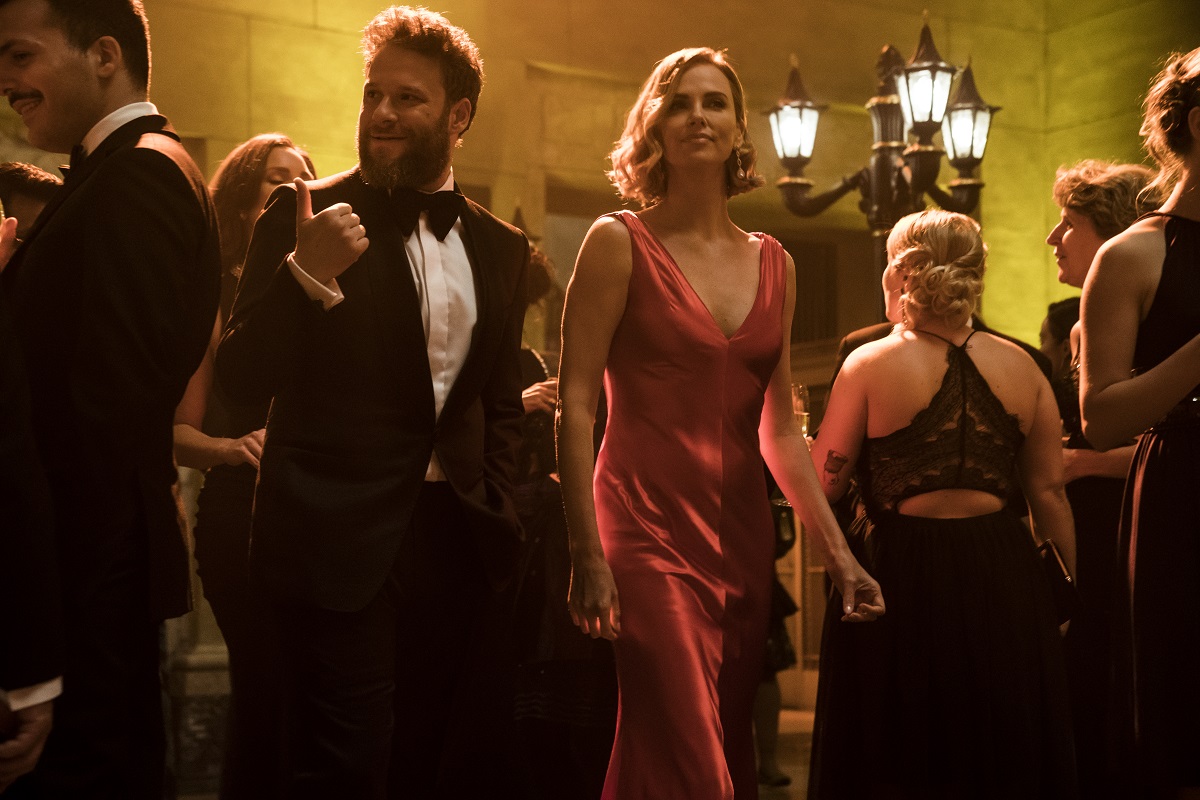 Similar to Seth Rogen’s previously produced comedies, Long Shot takes a topical and interesting subject matter and performs a comedic dance around the hat. In the same way that Sausage Party took glee in the question rather than the answer of mortality and faith, this film takes aim at messy politics and the even messier influence of media, only to veer to funnier target in proximity. The good news is that this time the A plot of the satire is that of a sweet romantic comedy that always means well even when plowing into the familiar Rogen ranch of raunchiness.

Rogen plays Fred, a liberal journalist so devoted to exposing the right-wing that his infamous articles include such headlines as “Fuck You, Exxon.” He dresses as though the 1990s never ended, given his neon attire of sweatsuits and ball caps. He certainly seems stuck in that era considering his love of Boyz 2 Men and his high school crush of Charlotte. He lost track of Charlotte but is astonished to discover that she is now the Secretary of State, played by the stunning Charlize Theron. They reconnect at a party and soon find themselves in need of each other. Charlotte needs a humorous and honest speechwriter for her campaign for President of the United States. Fred recently quit his publication when it was bought by a right-wing media conglomerate and is in need of work.

What forms is pretty much the modern take of The American President with the sweetest of hearts and the biggest of laughs. Rogen learns some harsh lessons in learning how the politics game is played when not furious behind a keyboard and Theron gets a good dose of sobering shock as her campaign grows cloudy. Through it all, however, they connect and a magical bond forms. Though they haven’t known each other since they were kids, they reconnect exceptionally well. Just about every scene with the two of them alone and together is adorable, be they batting around speech ideas, chatting about their favorite music, or having awkwardly cute sex.

Running alongside the couple is a host of strong supporting comedic talent that all pull their weight rather well. Fred’s best friend is a powerful boss played by O’Shea Jackson Jr., encouraging enough to be vocal and powerful enough to let everyone know it. He rattles off some of the funniest lines with a firm delivery, his best bit being that Fred and Taylor Swift should date merely because they’re white and don’t have a care in the world. Charlotte’s boss of the US President by a refined and ridiculous Bob Odenkirk is absolute hoot as a man more infatuated with acting career before and after his presidency. Andy Serkis plays a Rupert Murdoch figure, perfectly donning a slimy old mogul costume as an insidious right-wing media mogul. Even Alexander Skarsgård gets in some good laughs as a Canadian Prime Minister with the most ineffective of laughs.

Similar to The American President, Long Shot is very aware of the times and somewhat bold in its political ambitions. Yes, the film does take obvious shots at Donald Trump and Fox News, sometimes from a distance but other times right on the nose. These attempts thankfully carry great satire as the most telling and hilarious segments features a parody of Fox & Friends, where two gossipy men make racial and sexist banter while the woman in the middle just smiles and brushes off the gross for as long as she can. Charlotte’s initial campaign of pushing forth a global environmentalism policy goes hard and passionate, acting more as just something to keep pushing our two leads together, giving them a real drive.

The good and bad news is that by the third act, the romantic wonderland vibe is in full swing, where the grander sense of politics mostly take a backseat for the honesty and public declaration of affection that punctuates with a big kiss. There’s no grand speech that will change the world or tackle tougher issues but more of sweeter statement about how not fearing yourself will lead towards the freedom you desire. And considering all the work this film puts in with its characters and its political landscape, it certainly earns that big cheer towards the end.

I laughed more than I thought I would with this Seth Rogen produced vehicle mostly because the romance and comedy trump the commentary that does more balking than pontificating. Yes, the familiar brand of raunchy humor is still present, including a drug montage at a club and a gross-out masturbation sequence. But even those moments never loose sight of the true tenderness in the picture, painting a portrait where Rogen and Theron are deeply in love despite the wishes of the rest of the world. And it’s quite the sight, so cute and comedic I wish there were more of its kind. All I’m saying is there’s a whole other movie to explore by the end of the picture and I certainly wouldn’t mind seeing Rogen and Theron pull a West Wing continuance.