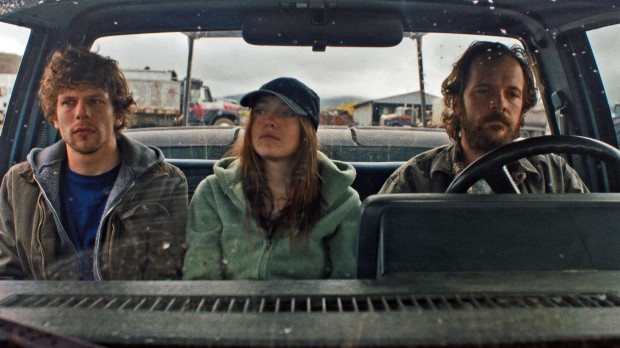 In the quiet drama of ‘Night Moves’, Jesse Eisenberg plays an extreme environmentalist who teams up with two like-minded individuals who conspire to destroy a hydroelectric dam. His two companions are Peter Sarsgaard as the veteran hippy of the group and Dakota Fanning as the feisty, but dedicated player somewhat new to this operation. They secretly acquire all the tools they need and silently carry out their sabotage. While they are successful at destroying the dam, the resulting damage manages to kill one singular camper near the area. All of the players break contact with each other and try to keep their mouths shut, but the murder lingers on the minds of Eisenberg and Fanning. Couple that with the crippling realization of how much of a difference they may actually be making with their actions.

These are very rich and deep characters so well-defined that we see can clearly read the mental fury pulsating through the three leads. They’re not just passionate college kids either. They are hardcore environmentalists that live on communes off the grid. These three are so committed and dedicated to the cause of crippling human sources of pollution that they’ve close their minds off from questioning any of their motifs. Perhaps they’ve gone so far down the rabbit hole they’re afraid to look back at any point. The film eventually hits on that moment of hesitation that brings things into darker realm, but it doesn’t play out as a Mexican stand-off or everybody getting caught. Instead, the film leaves us with an uneasy feeling lodged in the heart of Eisenberg’s character about how easy it is to lose sight in passion.

‘Night Moves’ is directed by Kelly Reichardt with a somber and eerie tone. Most of the film follows around Eisenberg silently as his mind does mental somersaults coming to grips with his fears. It’s the fear of paranoia, the fear of trust and the fear of humanity. He delivers a fantastic performance as does Fanny and Sarsgaard as focused group of terrorists. The film is also incredibly well shot as in an unforgettable moment when the trio is nearly caught while working under the cover of night. We see the car lights coming from high up on a hill as if we’re looking up directly at them with the characters. We feel the same tension and unclear nature of their perspective. It echoes that of a Hitchcock film which draws intensity from the long-shot unknown.

It’s brilliantly shot with great locations, it’s dreamlike in its surreal nature and gives the actors plenty to do when there is hardly any dialogue on the page. This is a very well-done piece of filmmaking that gets inside your head and never lets you go. It’s a very worthy purchase.