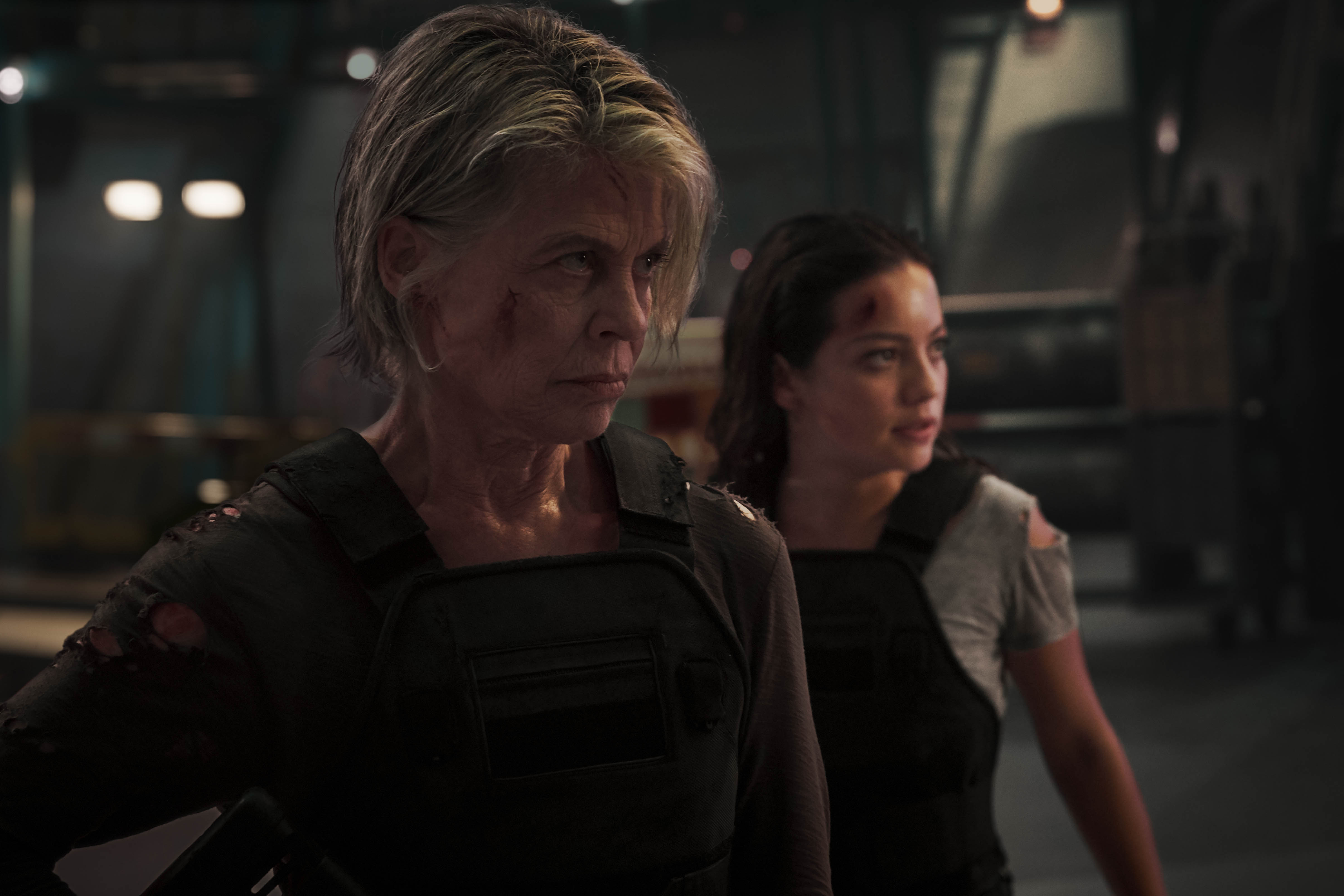 Even though the Terminator franchise seems to have been stuck in the same gear since its initial time-travel premise, Dark Fate tries desperately to switch out as many parts as it can. Instead of taking place mostly in America, the battle shifts to Mexico and the Texas border. Instead of another generic white guy action hero taking center stage, we now have a trio of strong women of different ages, ethnicities, and height. While these cosmetic changes are appealing, they still feel like decadent frosting on a rather dusty cake.

Consider how we’re treated to the story being so business as usual it seems like a routine mission for the familiar faces. Skynet was defeated in this timeline but now there’s the new corporation of Legion, such a bland title that the film doesn’t even bother trying to further explain this Skynet 2.0 since that’s all it is. A new Terminator (Gabriel Luna) has come from the future to stop one woman from changing the course of the war between humans and machines. This new model is melding of the T-800 and T-1000 models from previous movies, dubbed the Rev-9. Intimidating, sure, but only on the motivation of being a soulless robot rather than an intimidating character based on the performances instead of the computer graphics slathered on top of him.

His target is Dani (Natalia Reyes), a Mexican woman who will change the future. She works at a car factory and soon finds herself desperately fleeing from the evil machine. Dani, however, is protected by the time-traveling cyborg soldier Grace (Mackenzie Davis), showing up just in time to deliver the obligatory line of following her if you want to live. I knew it was coming but I hope it wouldn’t. I also expected another hallmark; a chase with a big truck. Yeah, it happens and it’s not a bad sequence, especially with Davis launching rebar like spears off the back of a truck. But the film is so stuck on a narrow track that it can’t avoid so many of these tired expectations.

The saving grace of the picture is by far Linda Hamilton, returning to the role of Sarah Connor. Unlike just about anyone else in this film, she has such an engrossing character with a rich history and real personality that brings the grit and sass back to the franchise. After all, Arnold Schwarzenegger can only deadpan as the Terminator for so long before he’s a dreary husk of a performance. Thankfully, the film uses him sparingly this time around, feeling far more like a minor cameo than the big draw.

There was hope with the restructuring of characters and locations that maybe this sequel could find something new. There are certainly plenty of opportunities to explore new themes. Dani works in a car factory that is quickly replacing human jobs with machines. Something to do with Legion? Nope, just a small touch of minor commentary in kinda/sorta updating the Terminator lore. The story later shifts towards a border patrol detainment facility. Immigration commentary? Not much, unless watching the Rev-9 dice up border patrol agents were meant to count as anything more than violent revenge fantasy. No, the film mostly sticks to the weary old mechanics of the Terminator lore and even points out the more obvious ones. Did we really have to outright state the Terminators were essentially hunting wombs? Wasn’t this obvious from the first film?

Terminator: Dark Fate has all the right parts to breathe some new life into this worn old franchise but it ultimately just needs a whole new engine. Everything surface level about this film is pretty unique, from the feminist-friendly casting to the vicious punch of the always-explosive action sequences. But if this franchise can’t find some new avenue than just playing Mad Libs with the same old story, it’s either time to find something new or ditch the Terminator franchise outright. Maybe just focus on Sarah Connor since she’s the best part of the film. The Sarah Connor Chronicles perhaps? Yeah, I know that series was already attempted but since we’re already rebooting everything nowadays, why not have Linda Hamilton shine brighter as the bold and aged action woman we need in a film.