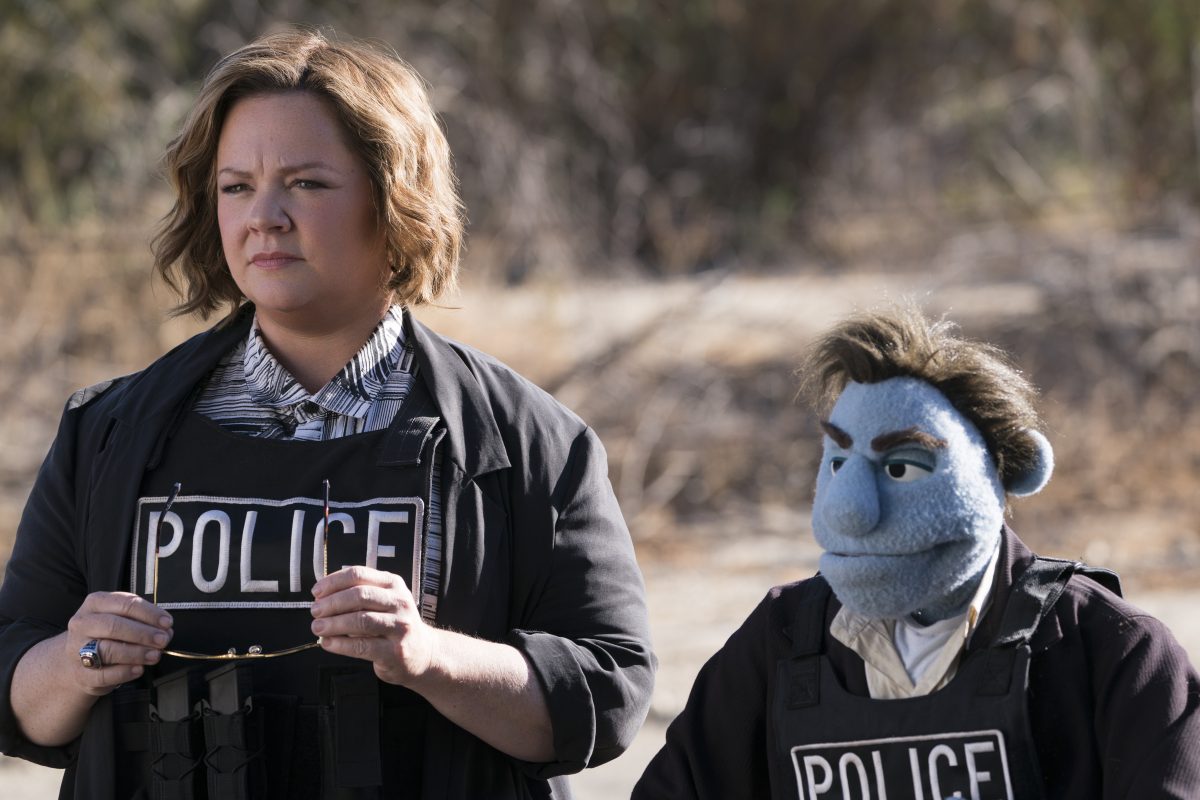 The Happytime Murders is all about subversion and relies on it to carry through with a raunchy comedy. We’ve become used to seeing Jim Henson productions of colorful puppets have a wholesome tone that I’m sure it was a delightful shock to advertise that Brian Henson, son of Jim Henson and director of The Muppet Christmas Carol, would make something so filthy. Indeed, the movie does feature felt figures having sex, taking drugs, and pushing the profanity. And, unfortunately, that’s all it has to offer. No engaging story, no interesting characters; just puppets cursing and ejaculating silly-string.

The Henson studio usually does a great job at defining the characters attributed to puppets, but not this time. The lead puppet of Phil, a drowning-in-the-bottle private detective, is nothing special for playing it too straight. He used to be the one and only puppet cop in a society that doesn’t value the puppet race but was kicked off for the missing the shot on a crucial case. It’s classic noir staging but without any of the funny. Well, unless you consider Phil’s constant need for cussing a humorous trait, except a character like Phil looks as though he would constantly sling around the F-word.

His latest case involves murders surrounding the puppet cast of the sitcom The Happytime Gang. The washed-up stars are savaged in a number of wickedly goofy deaths that sends fluff flying. Helping Phil out is his ex-partner from the police force, played by Melissa McCarthy who is more than capable of keeping up with Phil’s vulgarity and dark sense of humor. While McCarthy always has an ease of finding humor in her delivery and presence, she’s fighting an uphill battle with a rather bland character. As such, McCarthy has to provide extra comedic backup for the script, or at least as much as she can muster in an elaborate puppet movie that requires her to stick to the page.

Even if I weren’t to compare the lacking raunch of The Happytime Murders to the superior offensiveness of Meet the Feebles and the better world-building of Greg the Bunny, this is still a movie that never lives up to its full potential. Consider how McCarthy’s character has a puppet liver in her body, providing a potential bridge for more puppet specific avenues. It amounts to little more than McCarthy snorting puppet-only drugs and cackling on her high.

A 1980s sitcom seems as though there could be lots of funny stuff to reap in mocking the era but nothing comes of it. Not even the sitcom characters being targeted have much personality, filling one scene of base vulgarity and lackluster puppet lore. Sometimes the characters are so boring I’m thankful they’ve been reduced in the film, as with the drug-addict puppet Goofer that serves the purposes of talking about prostitution and gross puppet sex positions before being slaughtered in the next scene.

Also involved in the picture are nothing human characters that feel more artificial than the players made of cotton and fabric. Maya Rudolph could have been a hoot as Phil’s 1940s-style secretary Bubbles but, much like McCarthy, she’s not given much to work with. Joel McHale had the chance to a biting antagonist of a strict FBI agent, but he seems more angry about not getting in as many profane jokes than being frustrated by Phil’s off-the-book tactics. And supporting roles of Elizabeth Banks and Leslie David Baker were so unbelievably dull and stock I wondered why the film didn’t just make them puppets as well.

I know the Henson company can do better, not in terms of dignity but creativity. There was always an edge to the Muppets that allowed them to be interesting characters while occasionally sneaking in the more adult charms under the radar. I thought back to the original pilot for the Muppet show that boasted an end to sex and violence. Now the sex and violence have been built back up and the result of The Happytime Murders is less of a brilliant divergence and more of a chance to get all the nastiness out of the puppets. But once you’ve got all that crud out of your system, you just want to flush it away.

The lampooning of Sesame Street has been going on for years with much cheaper and clever productions that went the extra mile to be crude and irreverent. If Brian Henson wants to play in this backyard, he’s gotta slap some meat on his plate of putrid, because watching two puppets have sex isn’t going to cut it. He missed the filthy boat on that shock value, already helmed by Peter Jackson with a big-breasted hippo. The Muppets were not just a hit because they were wholesome but because they were interesting and wacky characters that could fit into just about any scenario. I doubt anyone will come to fondly remember the bland puppet Phil past his ludicrous sex scene.