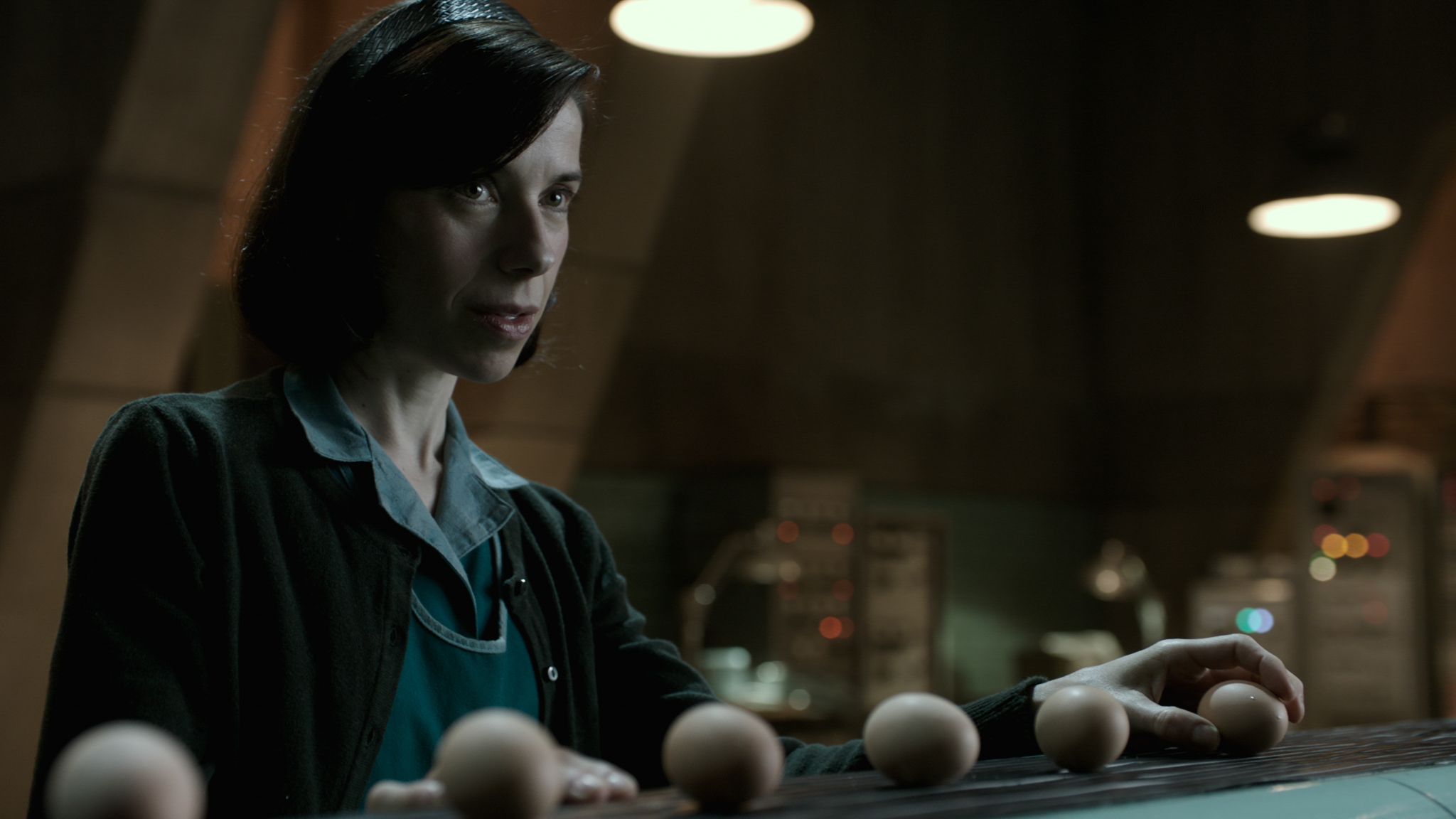 The Shape of Water presents the argument of why director Guillermo del Toro should be directing the new crop of Universal monster movies and why he will never be chosen for such an honor. He should be directing those films because he has a playful and experimental vision in both direction and tone for crafting an unorthodox creature feature. He won’t be selected because his ideas are just too out there if Universal wants their monster properties to nab some of that blockbuster cash. I can’t imagine general summer audiences would dig a film where a woman has sex with an amphibian creature in a romantic manner.

The woman is Elisa Esposito (Sally Hawkins), a mute woman of the 1960s, living a quaint life in her apartment above a movie theater. She lives in Baltimore but Guillermo del Toro shoots her rustic place and quirky wake-up routine in a manner that seems as though it takes place in Paris, complete with an accordion in the soundtrack. Elisa works nights at a government facility as a janitor alongside her talkative pal Zelda (Octavia Spencer). While mopping up a bloody mess in one laboratory, she meets the facility’s latest captive, the Amphibian Man, played by the always-a-creature Doug Jones. Over eggs and records, the two form that old relationship of beauty and beast. You know, if the beast bit off fingers.

One man whose fingers he doesn’t mind biting is that of his captor, Colonel Richard Strickland (Michael Shannon). He’s as nasty a villain as they come, belittling his co-workers, slinging racial jabs at the help, and eager to gun down anyone impeding his job. Richard seems as though he’d be a more refined villain with his spiffy and versatile cane but when the Amphibian Man mysteriously escapes, that cane is going to stain with much more blood. His nastiness at work and his ego at home with screwing his wife while deciding on buying a Cadillac make his inevitable fall as the more pleasing when that gruesome climax finally comes.

Hawkins and Shannon are exceptional in these roles but the secondary characters nearly steal the show. Elisa’s roommate is Giles (Richard Jenkins) is an old, closeted homosexual that works a commercial artist. His work will hardly even let him in the building and the diner manager he fancies won’t return the sentiment. He bonds with Elisa over late lunches and classic musicals on the TV, the two entertaining each other with dance numbers. He holds a much greater relationship with the Amphibian Man, relating to him more as a relic that doesn’t quite belong in this timeframe. Only someone as accepting and sophisticated as Richard could forgive a monster eating one of his cats.

Also interesting is the Russian spy Dr. Robert Hoffstetler (Michael Stuhlbarg), acting as a scientist overseeing the Amphibian Man. This creature must emit some good-natured vibes as Hoffstetler finds himself conflicted about his work, not satisfied with working for either the Americans or the Russians. He’d much rather be the good guy and help Elisa sneak the Amphibian Man out of the lab.

This is a story that’s nothing all that new, echoing beats of this year’s other creature-smuggling picture Okja. What makes it stand out is Guillermo’s boldest to take this material into areas that most filmmakers dare not tread. Romanticism isn’t new to monster flicks but most films wouldn’t go as far as showcasing Elisa and the Amphibian Man making out naked in a flooding bathroom. Violence is a guarantee with a creature feature but I wasn’t expecting a rather grizzly scene where a character is dragged across the floor from a finger hooked in a bullet wound. And where else can you see a woman and a monster dance together against a big band in one of the wildest visuals of any movie this year?

The Shape of Water fittingly takes a somewhat lucid approach to its tale of horror, comedy, and romance. It proceeds down a familiar path but offers lots of pleasing asides that will catch the audience off guard. So many emotions flow from here and there but what ultimately made me smile the most was the weirdness of it all. It’s a picture that by most accounts seems as though it would be a train wreck not worth pursuing. Guillermo’s laughs at such a challenge, asking someone to hold his beer while he works his movie magic. His direction alone saves a rather standard monster picture from being just that.