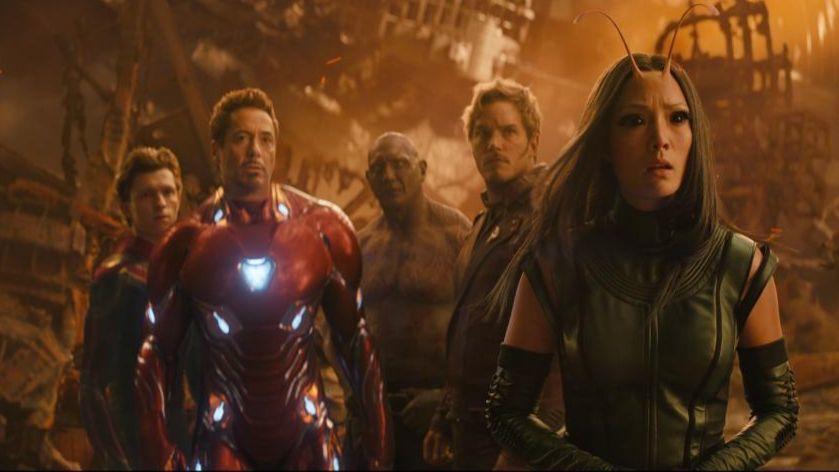 If the abundance of superheroes at the cinema has fatigued audiences, Avengers: Infinity War may be the most exhausting of the subgenre, albeit the most satisfying of the Avengers films. There are well over 30 heroes present, multiple arcs that splinter and crossover, and the grandest of action scenes in a superhero ensemble to end all superhero ensembles. It’s a mighty ambitious project with a budget as monstrous as its casting, but it’s a relief to report that directors Anthony and Joe Russo have proven once again they can juggle dozens of characters and twice as many plotlines. There isn’t much time for the audience or the characters to catch their breath in this mad dash of an event picture, but the amount of chemistry and pathos weaved into this oversized action picture is an amazing enough feat in itself, daring enough to dizzy even the most astute of Marvel fans.

The Avengers and a slew of other superheroes are finally facing their greatest threat yet, the intergalactic warlord Thanos (Josh Brolin), the large purple monster donning golden armor and looking as though his chin has drawn-on hairs. A common and consistent complaint among Marvel movies is the lack of interesting villains, as the antagonists are usually bitter baddies that want to blow up the world with a doomsday device. Thanos avoids being a one-note scowler, almost as though he’s been studying up on the other Marvel bad guys that were so easily defeated. He’s quick with his plans of snatching all the Infinity Stones for his gauntlet, but also has an intriguing reason for why he wants complete control of the universe. He keeps his temper in check but still has enough personality that there is guilt and sadness in his utilitarian crusade. This more emotional aspect allows for Josh Brolin’s stellar acting to come out and play for a character that is computer animated.

While Thanos ponders and plots in his galactic jewelry heist, our heroes have to reassembled after multiple films of being distant from one another. There’s a lot of introductions and catching up to be done, but the script by Christopher Markus and Stephen McFeely keeps these meetings fast and fun with clashing personalities. The film is at its highest when Iron Man (Robert Downey Jr.) mocks the attire of Doctor Strange (Benedict Cumberbatch), Spiderman (Tom Holland) swaps pop culture love with Starlord (Chris Pratt) and Thor (Chris Hemsworth) believes the talking raccoon Rocket (Bradley Cooper) to be a rabbit. Of course, you will get to see them team up for battles against Thanos and his minions, mostly working together to save the day and look cool doing it. There’s so much going on that there’s hardly a moment for anyone to breathe in this cutthroat battle for the planet.

The premise of a series of introductions and showdowns for the characters does fall into a formula that doesn’t allow for much shifting of character. And that’s honestly fine; we’ve had 18 films to get to know all of these characters and we’re well acquainted with them and their arcs that we don’t need another long and somber repeat for the pathos of Drax (Dave Bautista), nor do we need a further examination of how Captain America (Chris Evans) currently stands on the world stage. The film is essentially a mash of some witty crossover conversations and creative battles, where Starlord can skip across Strange’s magic discs and Bucky Barnes (Sebastian Stan) can create a circle of gunfire with Rocket. This movie is counting on us to be updated on this serialized comic book universe, especially with cameos from characters we haven’t seen in many years.

The Russo brothers have done their best to make sure there is always some weight behind the relentless action we’ve come to expect from the Marvel movies. The central theme of the picture is that of anti-utilitarianism, where the price of placing the needs of the many leads Thanos down the path of insanity and genocide. Throughout the picture are several moments where heroes are held at gunpoint, bartering the Infinity Stones in exchange for lives. The constant need to shirk the acceptance of the loss of life may grow irritating, but it helps that at several points it is proven that sacrifice doesn’t work. The heroes have finally come into their own with their morality, unaccepting of loss of life being a means to an end. This is why Thanos is such an interesting villain to watch for the guilt that washes over him with the tough calls he makes that are tougher than his punches.

Avengers: Infinity War is one of those draining blockbuster movie experiences where there’s so much to process that one could launch themselves into a lengthy thesis to determine their verdict. With such a blazing pace and tightly-crammed cast, along with probably the riskiest and shocking of endings, it’s a lot to take in and assess. I may not even be able to fully know my thoughts until the second part of this film releases next year. What I do know is that I laughed listening to the crossover quips, smiled at the action-packed team-ups, and had goosebumps for an unexpected cliffhanger that leaves the audience with way more to ponder than which hero is coming up in the next film. I’ve avoided spoilers, but I will say be prepared to have your heart ripped out for who bites the dust and your jaw drop at the ultimate cliffhanger.