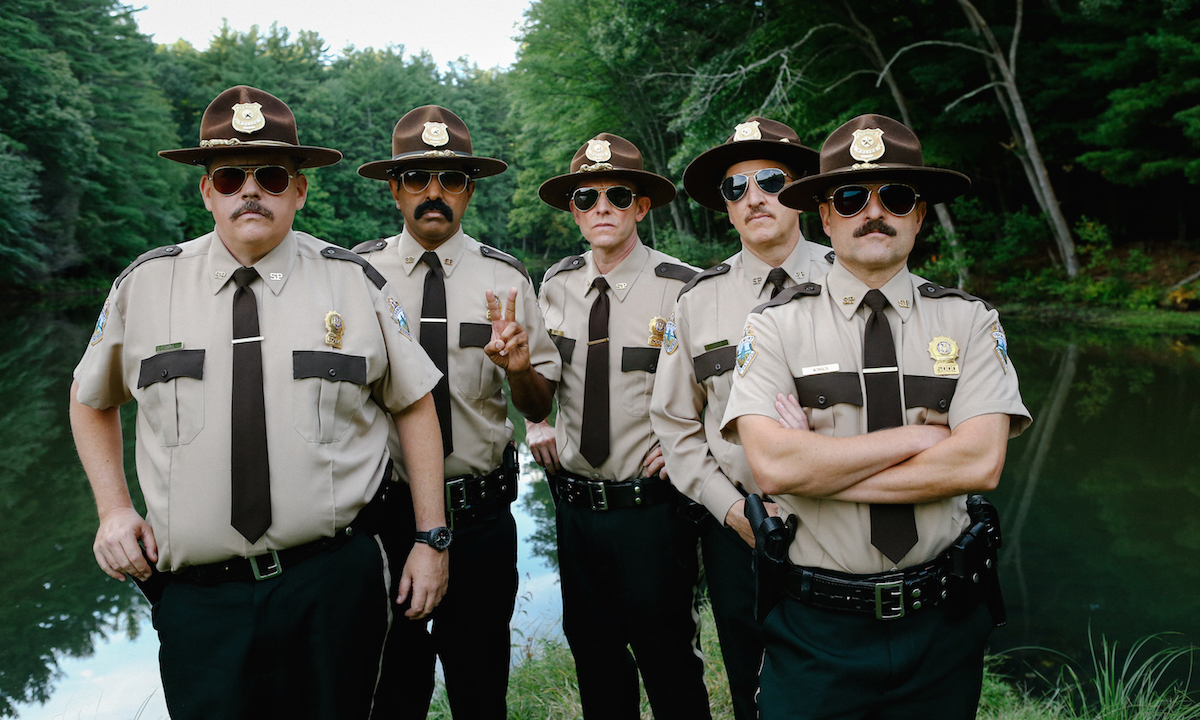 The return for the raunchy highway patrolmen that functioned more like a fraternity doesn’t come roaring back with a timely new story to tell. It doesn’t even return with an original premise, adopting the same simple staging of a drug conspiracy to keep the boys busy. Clearly, the Broken Lizard troupe wanted to return to their most notable theatrical comedy because they had a new batch of Canadian and sex jokes they wanted to sling on the big screen. Despite a handful of duds, there’s some clever comedy of mustaches and Canadians that hits high enough to improve the troupe’s laugh average.

The gang is all here as they return to the force with a cartoonish means of getting them back in uniform. The United States is expanding into a small pocket of bordering Canadian territory and the region needs some new highway patrolmen to replace the old mountie guard. The Broken Lizard characters are clearly not up to the task, what with the lack of speaking French and the explosively obnoxious nature of the tubby antagonizer, Trooper Farva (Kevin Heffernan). So is it even a spoiler that they’re being set up to take a fall? This is all telegraphed early on with a secret meeting to discuss the troopers’ redeployment and the creepy smile of the Canadian mayor played by Rob Lowe. The script isn’t exactly counting on you to be surprised when it turns out Lowe is behind a drug smuggling scheme; it’s hoping you’ll be too busy laughing at Lowe trying to ham up the exaggerated Canadian accent or tugging on an exposed penis.

Even though the sequel is going back to the well, there’s enough new to warrant more of a sequel than a retread. It helps that there’s a better building of gags, including a long-running and gradually revealed bit about how the patrolmen were initially fired in an accident involving Fred Savage. Though it seems like they exhausted all of them, the Canadian/American disconnect gags have their moments of brilliance, getting the most mileage they can out of jokes about meters and pancakes. I think what makes this crude comedy work so well is the spirit of the troupe that does shine through in a handful of segments. Easily the biggest laugh I had out of the film was when the always-infuriated Brian Cox questions why Heffernan swallows M&Ms whole. There’s no real punchline, but the exchange of their behaviors was somehow enough to make me laugh in what was most likely a throw-away bit of a dialogue between the grander bit of Heffernan being constantly shocked by the police radio.

The movie becomes a rollercoaster at times, hitting high with amusing bits of Will Sasso pranking mounties about not knowing Danny Devito to the lowest of the brow for Heffernan jamming his fingers up someone’s butt when they try to give him CPR. At times there are also missed opportunities, as with the pointless return of Marisa Coughlan as the trooper love interest and the Canadian version Farva that garners little more than a raised eyebrow from the American Farva. There are even some lesser gags that do little more than the expected, the most elaborately uninspired being when a bear strolls into the patrolmen offices. And my heart sank just a little bit with how many tired callbacks there were to the original with everything from mentions of liters of cola to Jim Gaffigan reprising his one-scene role as a pulled-over motorist. Don’t remember his skit? Don’t worry; the dialogue will hold your hand to recall he was involved in a prank involving the word meow.

While there weren’t as many memorable scenes as the original Super Troopers, I must admit I found myself smiling more than I was bored with what amounts to little more than a cobbling of skits for Broken Lizard. Most of their bits are pretty amusing, from mustache toupees to a drug-induced and paralyzed Farva on a scooter. The location shift also makes for a new batch of jokes, even if the let’s-foil-the-crooked-foes plotting lack any divergence from the previous film. I always felt as though in order to truly appreciate the hilarity of Super Troopers that I needed to be high for it to be a laugh riot. Super Troopers 2 has just enough to warrant a smaller dosage.